DND scraps deal that bars state forces from UP campuses 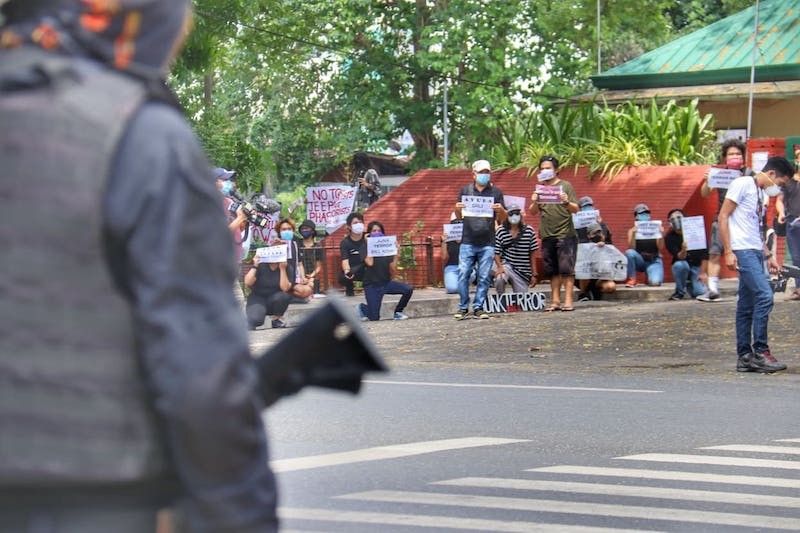 CEBU. In this photo taken on June 5, 2020, UP students and alumni as well as left-leaning activists hold a protest rally within UP Cebu grounds as armed policemen and an anti-riot unit monitor them. They were dispersed after a few minutes and eight were arrested. (SunStar Cebu File)

THE Department of National Defense (DND) abrogated the agreement that prevents the police and military from entering any of the University of the Philippines (UP) campuses without prior notification of the university’s administration.

In his letter to UP President Danilo Concepcion, Defense Secretary Delfin Lorenzana said the agreement signed between the DND and UP on June 30, 1989 is terminated effective January 15, 2021.

Lorenzana said the DND has found the agreement, also called the Soto-Enrile Accord, a “hindrance in providing effective security, safety and welfare of the students, faculty and employees of UP.”

He said the abrogation of the agreement would allow the DND to perform its legal mandate to protect the youth against the recruitment activities of the Communist Party of the Philippines and its armed wing, New People’s Army.

Lorenzana said a number of UP students have been identified as members of the CPP/NPA as proven by the fact that some were killed during military and police operations.

He said the agreement between the DND and UP was being used by the communist recruiters as a “shield or propaganda”.

Lorenzana said the DND has no plans of suppressing students’ right to peaceful assembly and freedom of expression.

“We do not intend to station military or police inside UP campuses nor do we wish to suppress activismt groups, academic freedom and freedom of expression,” he stated.

He said doing so will only alienate the state forces from the people.

UP campuses have served as sites of protest actions,, especially when mass gatherings were prohibited in 2020 as part of measures against the coronavirus disease 2019 (Covid-19).

On June 5, 2020, eight UP students and alumni as well as left-leaning activists were arrested when they held a protest rally against the new anti-terror measure despite the prohibition on mass gatherings.

Policemen dispersed the protest and breached the campus’ perimeter fence to chase the protesters, who fled into the campus. The so-called Cebu 8 were released three days later and the charges against them dismissed in September 2020.

On June 12, 2020, hundreds joined a protest rally dubbed as “Grand Mañanita” in UP Diliman to mark Independence Day. Police set up checkpoints and blockades, but failed to stop the peaceful protest. (Marites Villamor-Ilano / SunStar Philippines)