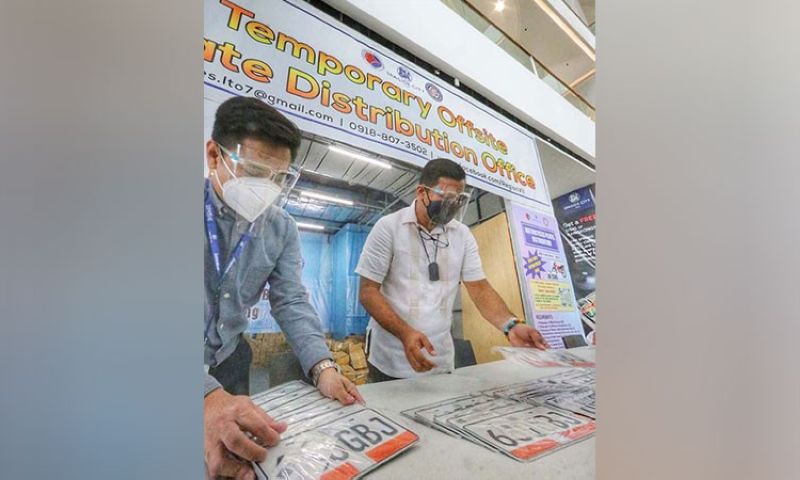 During the distribution, LTO 7 Director Victor Emmanuel Caindec said the 18,879 plates are only the first batch of the motorcycle plate numbers and additional batches of plate numbers are set to be released weeks after their inventory.

He said the first batch of plates arrived in the region in December 2020; however, the inventory process which ensures that these plate numbers match the LTO 7 records also took time.

The temporary off-site center for the motorcycle plate distribution is at the Seaview Wing of SM Seaside City Cebu.

To ensure social distancing and the observance of minimum health protocol amid the Covid-19 pandemic, Caindec said the releasing of the motorcycle plates to the owners or through the dealers is by appointment scheduled from Monday to Friday between 2 and 6:30 p.m.

Caindec said for verification, clients must first message or inquire about the availability of their plates through mobile number 0947-349-9965 following the format: (a) plate number, (b) date of registration and (c) name of vehicle owner.

He said they target to accommodate about 50 clients daily.

The requirements needed upon claiming of the plates include the photocopy of the official receipt, photocopy of certificate of registration and photocopy of owner’s valid government issued ID.

The LTO 7 said if a representative will claim the plate, they will have to bring a notarized authorization letter with one photocopy of a valid government issued ID of both the owner and authorized person.

If it is a company-owned vehicle, a notarized special power of attorney and a secretary’s certificate with one photocopy of a valid government issued ID of the secretary and the authorized person are required.

Caindec said the releasing of these plates with RFID stickers ready, is free of charge.

The RFID stickers, he said, can be placed in front or on any visible area of the motorcycle unit for easy access on inspections.

The motorcycle plate has color orange strips, the color code of the region, on the lower right and lower left sides of the plate.

He said if the color strips attached to the plate number are not orange, that means the unit is not registered with the LTO 7.

Asked if they have released motorcycle plates for units registered before 2018, Caindec said the releasing on the regional level is also just based on the available motorcycle plates produced and delivered by the national office.

He then appealed to the owners whose plates are available for releasing to claim their motorcycle plates.

He said earlier this year, they have released 31,167 plates for various motor vehicles. However, as of Jan. 15, only around 7,900 plates have been claimed. (WBS)