Cebu lawyers propose own protection program against killings, may use hotline, safe-house and bodyguards 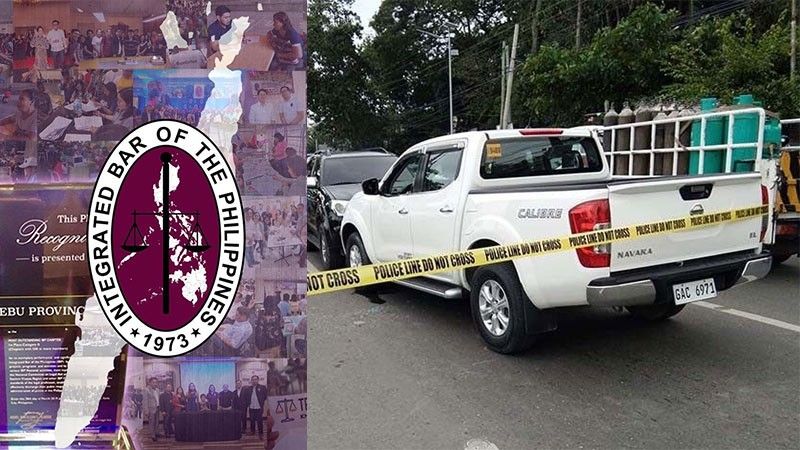 CEBU. Logo of the IBP Cebu chapter and the pick-up truck of Atty. Baby Maria Concepcion Landero-Ole, who was gunned down in broad daylight in Danao City on December 17, 2020. (IBP Cebu Facebook page/Danao City Police Office)

ASSESSING the threat. Relocating the threatened lawyer or judge to a safe-house. Close-in security. Training the lawyer on detecting the threat and dodging danger and harm. And less stringent legal requirements on gun-toting for the lawyer who wants to carry a firearm.

Those measures highlight the "Lawyer Protection Program for Cebu Lawyers" proposed and formalized Monday, January 18, by 11 members of the Cebu province chapter of IBP or Integrated Bar of the Philippines.

The lawyers noted that Cebu province is "ground zero" of the rash of killings, noting that 14 of "our brethren" have been killed since 2004. In 2020 alone, they said, two lawyers were killed. One media count placed the death toll, the group said, at 55 since 2016 across the country, the latest being the January 14 murder in Malaybalay Ciy, Bukidnon.

The protection program for lawyers repeat and firm up the plan raised last December 17, 2020 in a meeting of IBP Cebu province chapter president Ria Lidia Espina and Cebu City chapter head Regal Oliva and law professor Amando Virgil Ligutan with the Cebu province police office. At the time, three local lawyers had been shot just months apart, two of whom died, including Baby Maria Concepcion Landero-Ole, who was killed earlier that day in Danao City.

Specifics of the plan

The new plan, compared to the proposal earlier disclosed by Ligutan now has specifics, such as:

[1] THREAT ASSESSMENT. A 24-hour hotline receives the call from a lawyer who gets "actual or perceived imminent death threat." The hotline must be known by lawyers, the program says: "First off, the lawyer should know whom to call." Threat is assessed immediately by police "and/or" NBI as serious, less serious or simple. The lawyer, with IBP assistance, immediately goes to NBI or police. If police or NBI rates the threat as serious or less serious, the lawyer is relocated.

[2] PHYSICAL RELOCATION. The lawyer goes to an undisclosed location, the owner of which will have a "signed agreement" with the IBP chapter. Disruption of routine through relocation to a safe-house aims "to increase the lawyer's chance of survival."

[3] CLOSE-IN SECURITY. An official unit within PNP is "ready and able" to provide the lawyer admitted into the "Lawyer Protection Program." He may continue with his work, with the required bodyguard/s, per "recommendation" of NBI and/or police. When the period for police security lapses, the IBP chapter helps in the expenses for personal private security service.

[4] TRAININGS ON DETECTING THREAT, AVOIDING HARM. "Professional and continuous" trainings seek to increase awareness by the lawyer of his surroundings and how to protect one's self. That involves knowing more about the places the lawyer works and stays in or travels to and learning ways to detect and prevent injury or death.

The lawyers group proposing the program said it had consulted the PNP, NBI, Department of Justice Witness Protection Program, private security agencies, and their fellow lawyers.

They need, however, written agreements with the government agencies concerned to implement specific responses, such as the police and/or NBI assessing the threat or providing close-in security. Department regulations and resources have to be considered. A committee, the group said, will be constituted, comprising representatives from the IBP province chapter, the police and the NBI. That has to conform with department rules too.

It is not yet clear if the implementation will involve chapters other than IBP province. If it will, the document does not spell it out.