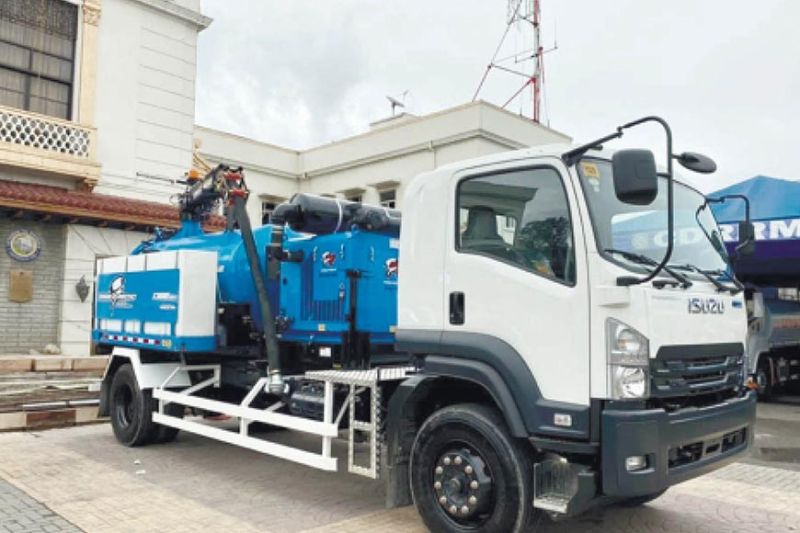 NEW TRUCK. The Mandaue City government unveiled its new vacuum truck during a simulation exercise at City Hall on Tuesday, Jan. 19, 2021. The truck, worth P21 million, will be used to help clear flooding in the city’s flood- prone areas and to clear the city’s drainage system. / Mandaue City Public Information Office

THE Mandaue City Government has bought a brand-new 1,300 cubic meter capacity vacuum truck to suction floodwater and unclog sewers particularly in flood-prone areas in the city.

The truck’s features were showcased by the city’s Department of General Services (DGS) during a simulation at City Hall on Tuesday, Jan. 19, 2021.

In an interview, Mandaue City Mayor Jonas Cortes said buying the vacuum truck was one of the City’s priorities, especially with some barangays prone to flooding.

But aside from flooding, Cortes said the vacuum truck would also be used to declog the city’s drainage systems to ensure their capacity to accept drain water during heavy rain.

This is the second vacuum truck bought by the City, Cortes said. The city government allocated P21 million to buy the truck.

Lawyer John Eddu Ibañez, Cortes’ executive secretary, said the city will also buy 30 suction pumps which will be distributed to the 27 barangays while the remaining three will be kept by the City as back-up.

He said the suction pumps will be the first remedy for flooding by the barangays.

If suction pumps will not be sufficient for the amount of floodwater, then DGS will support them with the vacuum truck, Cortes said.

Ibañez said if there are no requests on flooding issues, the vacuum trucks and the suction pumps will be used to clean the sewers and drainage in the city.

Radaza sought funding for the drainage system in the area as a way to prevent heavy floods similar to those that hit Metro Manila last year. (KFD, GCM / MMC)