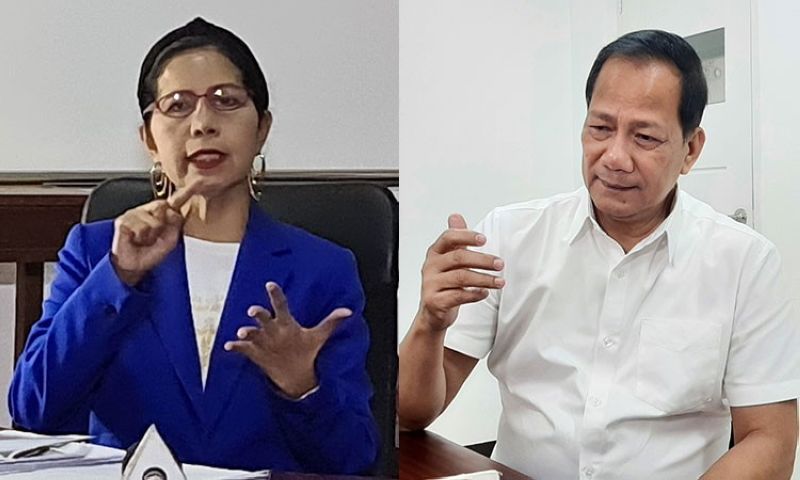 MONEY RETURNED. Vice Mayor Leonora Wong (left) said that she invested the local government's funds of P9 million for the money to grow but later returned the said amount upon knowing that it was not allowed by the Commission on Audit, while Loreto Santos (right), one of the complainants against Wong, divulged the alleged irregularities in the local government's purchase of land during the latter's mayoral term. (Chris Navarro/Princess Clea Arcellaz)

VICE Mayor Leonora Wong of San Simon town is facing administrative and criminal charges filed by a group of residents.

Loreto Santos, one of the complainants, said they filed administrative charges at the Provincial Board in November 2020 and graft and corruption and malversation of public funds case before the Ombudsman earlier this year against the former mayor.

Santos said the cases stemmed from the alleged irregularities in Wong's purchase of a 590,371 square meters of land using local government's fund during her term as mayor in 2011.

He said the then mayor Wong purchased the property located in Barangay San Isidro, San Simon at P180 per square meter, and part of the money used for the acquisition was from the local government's fund.

The check from Philippine National Bank registered under the "Municipality of San Simon" account amounting to P9 million was issued to and was transacted by Metrobank-Makati City, Santos said.

Santos added that the said transaction was executed without the authority of the Municipal Council.

"No resolutions were approved by the municipal council granting then mayor Wong the authority to purchase any property," he said.

Santos also said that the local government's duty is to spend its funds in the implementation of programs and projects that will benefit its people, and not invest in "buy and sell of properties."

The preliminary hearing of the case filed at the Provincial Board was initially scheduled on Tuesday, January 19, but was reset to give time to Santos's camp to review the respondents' reply, while the Ombudsman is yet to advice the group for its next move.

All in good faith

Wong, for her part, said that she invested the local government's funds in an aim of letting the money grow while not in use.

She said during that time, the local government has "over and above" surplus of income due to the proper implementation of local revised tax declaration code of 2008.

"Since we have a huge amount of surplus of income during that time, we

decided to reinvest the local government's money so it can grow and be utilized for more projects," she said.

When the property was acquired, Wong said the local government was supposed to be sharing ownership with her and her friend she identified as Rudy Sy, who also partly paid for the property.

However, during the processing of papers, it was learned that land ownership, especially involving the government, cannot be split into three individuals, so the transaction did not prosper, Wong said.

"When we learned that it was not allowed, I immediately sought the advice of my lawyers on how to proceed and upon recommendation of the Commission of Audit (COA), we returned the exact amount of money of P9 million to the local government," she said.

Wong, meanwhile, belied claims that she proceeded with the transaction without the authority of the Municipal Council.

She cited Municipal Council Resolution 11-11, which was approved by the legislative body on June 23, 2011 and gave her the authority to invest the local government's funds.

"It did not specifically note what kind of investment. It could be anything as long as the money will grow while not in use," she said.

"It was not really included in the annual budget of 2011 because the source of funds is from our surplus of collection," she said.