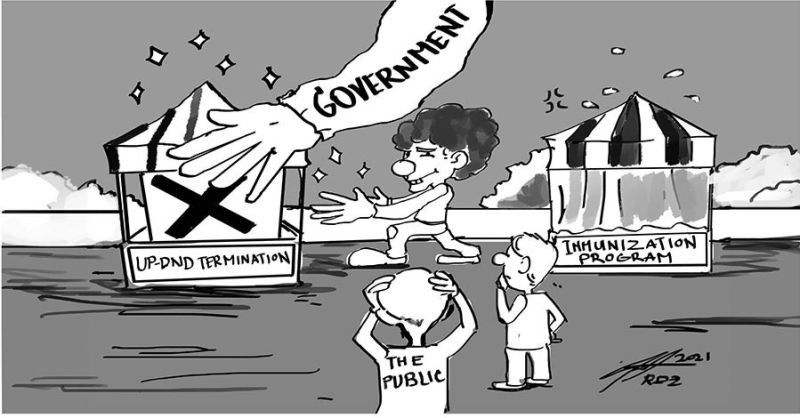 THE Senate hearing on the government’s vaccine deals hits a wall with an argumentum ad misericordiam with vaccine czar and Department of the Interior and Local Government (DILG) Secretary Carlito Galvez Jr. smarting about how they have been unfairly accused of corruption in relation to the purchase of vaccines. The accountable officials also set up another fence by evoking confidentiality in the matter of the Chinese Sinovac vaccine’s buying price. This was supported later by no less than President Duterte who said it’s customary “industry practice” to keep the prices private. Government, however, is merely propped up by public trust and transparency is nothing but sacrosanct.

The dizzying two-day Senate hearing on the government’s mass immunization program accomplished a lot, except clarity. In a privilege speech, Sen. Panfilo Lacson said, “Our officials were both tongue-tied and stuttering, leaving us with a string of flip-flopping pronouncements.” It might just be a case of “If you can’t convince them, confuse them,” the senator said.

Malacañang has been trumpeting the China-made vaccine for months now, a discordant note from what has so far been reported by the Food and Drug Administration (FDA). That as of now, only the vaccine developed by US manufacturer Pfizer and BioNTech has been given the Emergency Use Authorization (EUA). And yet, despite that, what flies persistently is the pronouncement that government is set to buy the bulk from Sinovac.

Lacson said that on the procurement criteria of price and quality, Sinovac is nowhere outstanding, even proving disadvantageous to government. It only has an efficacy of not more than 50 percent; it falls fifth as far as quality is concerned in the list of options. As to price, it ranks second as the most expensive.

Public attention sought more answers because the insistent hard sell of the Chinese vaccine seems to show a pattern that hints of sinister interests involving public funds—in whopping billions in taxes. Why, who wouldn’t be suspicious when the big stakes are clearly for an election year? Many in government are honest, said Galvez. The few insatiable thugs, however, can embezzle a country down the drain.

But here’s the twist. While more questions remain unanswered on the matter of vaccine procurement, government diverts public attention to the Department of Defense’s decision to unilaterally revoke the three-decade UP-DND Accord, an agreement that prohibits the presence of military and police authorities in the campuses of the University of the Philippines.

Government wins in two ways. It stole away serious focus on the immunization program and doubts on the vaccine acquisition, and stirred another public debate on academic freedom. The latter a totally unnecessary concern because terrorism is a bogey only in Lorenzana’s strained imagination. The defense sector itself has proclaimed in the last few years that they have been winning the war. Thus, in today’s context, government has its priorities misplaced because the pandemic is definitely out there, ravaging the economy.

Lorenzana’s show steals the limelight from all the red flags leading to what could be large-scale siphoning of public funds via a vaccine buy.