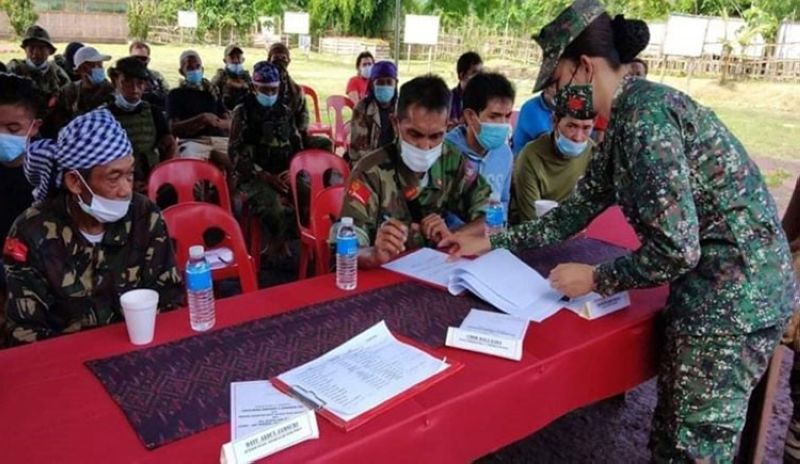 ZAMBOANGA. The base commanders of the Moro National Liberation Front (MNLF) under MNLF commander Ali Julkipli declare the Abu Sayyaf bandits as persona non-grata in all of their camps and communities in Kalingalan Caluang, Sulu. A photo handout shows MNLF leaders sign the manifesto of persona non-grata declaration. (SunStar Zamboanga)

THE base commanders of the Moro National Liberation Front (MNLF) under commander Ali Julkipli of Kalingalan Caluang, Sulu has declared the Abu Sayyaf bandits as persona non-grata in all of its camps and communities in the town.

The declaration is contained in a peace covenant Julkipli and his base commanders signed together with the Marine Battalion Landing Team-7 (MBLT-7) in a ceremony Tuesday, January 19, at the MBLT-7 headquarters in Karungdong village, Kalingalan Caluang.

Lieutenant Colonel Eduard Olaso, MBLT-7 commander, said in a statement that the denouncement of the MNLF against the presence of Abu Sayyaf bandits in their respective camps and communities is a clear manifestation that MNLF, as Peace Inclined Armed Groups (PIAG), is one with the Armed Forces of the Philippines (AFP) in establishing and maintaining peace and order in Kalingalan Caluang town.

Kalingalan Caluang Mayor Nurshamier Halun has lauded the coordination and cooperation between the MNLF and Philippine Marines in his town.

Songano praised the MBLT-7 troops for the "remarkable and significant accomplishment" in its Preventing and Countering Violent Extremism (PCVE) Efforts in the second congressional district of Sulu.

"Likewise, the 4th Marine Brigade under Joint Task Force Sulu as a whole will continue to conduct intensified key leaders and stakeholders engagement in order to sustain the peace and development efforts in the area of operations," Songano said.

The peace covenant signing was witnessed by officials of Kalingalan Caluang Municipal Government and the town police.

Meanwhile, to further support the campaign for peace and order in his municipality, Halun has also facilitated the voluntary turnover of loose firearms to the MBLT-7.

"The voluntary turnover of loose firearms to the Marines has signified our utmost cooperation to the objective of the security forces in my municipality," Halun said.

Kalingalan Caluang, which comprises of nine villages, is a fifth-class town in Sulu with a population of 31,567, based on the 2015 census. (SunStar Zamboanga)