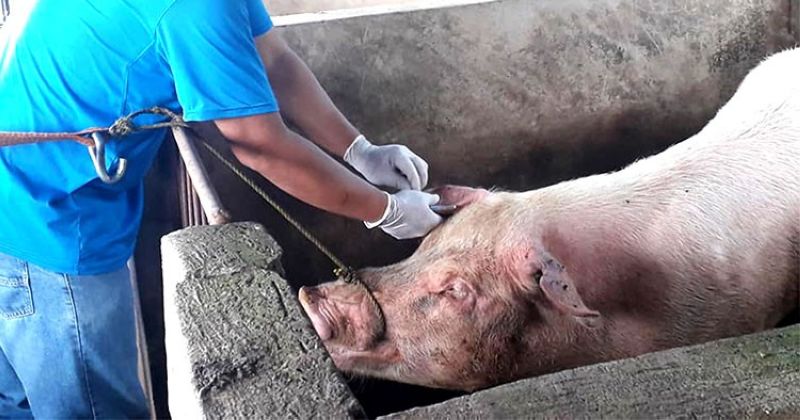 Photo from the Municipal Government of Boston, Davao Oriental

THE Municipal Government of Boston in Davao Oriental confirmed that the African Swine Fever (ASF) has now reached their area.

In a Facebook post, the Municipal Government revealed that the deadly hog virus had entered the locality after the confirmatory result coming from the Department of Agriculture-Davao Region (DA-Davao) came out positive.

The local government said samples were taken from Purok Dahlia and Santan in Barangay Poblacion.

Boston Mayor Rowell Rosit, as a result, issued an executive order, enforcing measures to curb the spread of ASF, which remains no cure nor vaccine as of present.

Rosit ordered the prohibition of movement of live hog and pork meat from and within Boston.

Hogs that would manifest ill-condition are advised to be reported to the nearest barangay or to the Municipal Agriculture office.

He admitted the current meat supply in the province cannot accommodate the demand.

"Di man kaya sa probinsya nga walay baboy nga gikan sa other area (Our province cannot meet the demands of our consumers if we will not allow entry of pork coming from other areas)," Dagmang said.

He, however, said importers and producers would have to undergo strenuous requirements and testing before their products would be allowed entry to the province.

Dagmang said pork products must certify that the area of origin is "certified ASF-free."

The Bureau of Veterinary Quarantine, afterwards, will be issuing a veterinary shipping permit to allow the transport of products to its destined area within the province.

The veterinary official also said the shipping permit will also be asked before the slaughtering of hogs.

Meanwhile, he reminded pork patrons to ensure that they would buy products with a meat inspection certificate.

The ASF case in Boston came days after the Mati City Government, still in Davao Oriental, confirmed the culling of around 132 hogs after receiving confirmatory reports that live hogs in some barangays in the city were infected with the deadly hog virus.