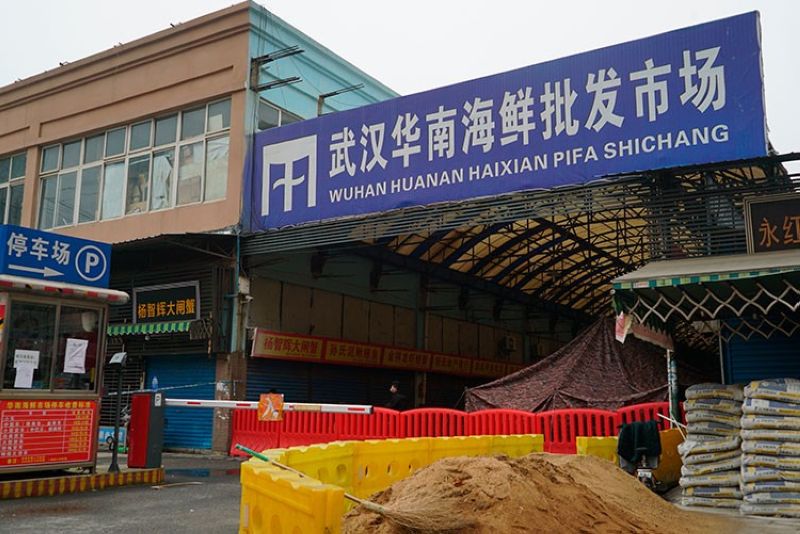 CHINA. In this January 21, 2020, file photo, the Wuhan Huanan Wholesale Seafood Market, where a number of people related to the market fell ill with a virus, sits closed in Wuhan in central China's Hubei province. (AP)

WUHAN, China -- The Chinese city of Wuhan is looking back on a year since it was placed under a 76-day lockdown beginning January 23, 2020. It was the most extreme step taken up to that point against the coronavirus.

China presents the lockdown as a huge sacrifice that bought the rest of the world time to prepare for the pandemic. Critics say earlier, more decisive measures would have prevented more people from leaving the city and spreading the virus around China and globally.

Some events before and during that crucial period:

* December 27: A Chinese lab assembles a near-complete sequence of the virus, showing it to be similar to the coronavirus that caused the 2002-03 Sars outbreak. The lab alerts health authorities, but the information is kept under wraps.

* December 30: Doctors begin warning about the disease independently on social media — most prominently Dr. Li Wenliang, who shares a lab report indicating the pathogen is a Sars-like virus.

* December 31: Officials close Wuhan's Huanan Seafood Wholesale Market, which was linked to dozens of the earliest cases. Li is punished by police and his superiors and told he is “spreading rumors.”

* January 3, 2020: The Chinese Center for Disease Control and Prevention obtains a full sequence of the virus but doesn’t release it. China reports the outbreak to the WHO, but Chinese authorities order labs and medical institutes to destroy patient samples.

* January 9: WHO says Chinese investigators have conducted gene sequencing of the virus, an initial step toward treatment and a vaccine. It does not recommend any specific measures for travelers.

* January 13: The first case outside China is identified in Thailand.

* January 14: Chinese health officials say in an internal meeting that “clustered cases suggest human-to-human transmission is possible” and order emergency preparations for a pandemic. In public, they downplay the virus’s ability to infect.

* Mid-January: The Lunar New Year travel rush — the world’s largest annual human migration — gets underway, with millions of people leaving Wuhan to return home or passing through on their journeys.

* January 18: Tens of thousands of Wuhan families take part in a mass Lunar New Year banquet hosted by the city. Many became infected.

* January 20: A top Chinese medical expert, Dr. Zhong Nanshan, announces on state television that the virus is transmissible between people.

* January 23: The Wuhan lockdown begins with a notice sent to people’s smartphones at 2 a.m. announcing the airport and train and bus stations will be shut at 10 a.m. Construction begins on the first of two hastily built field hospitals as thousands of patients overwhelm the city's health care system. Eventually, most of the rest of Hubei province would be locked down, affecting 56 million people.

* February 2: The first field hospital, Huoshenshan, opens 10 days later. Eventually, more than a dozen venues such as gymnasiums and conference centers are converted to sprawling medical wards to treat and isolate the less serious cases.

* February 7: Li Wenliang, the doctor reprimanded for sharing a lab report about the virus, dies of Covid-19. His death brings a national outpouring of grief and anger at authorities for punishing him.

* February-March: Wuhan’s streets are deserted apart from ambulances and security personnel as the city’s 11 million people are confined to their homes. Doctors and nurses arrive from around the country to help the city's exhausted medical staff, many of whom were infected in the early days when protective gear was in short supply and not always used.

* March 24: Authorities announce they will end the lockdown of most of Hubei province at midnight, as new cases subside. Wuhan remains locked down for two more weeks.

* April 8: Wuhan’s lockdown is lifted. Residents celebrate their freedom after 76 days with riverside parties while the city puts on a sound-and-light show emphasizing its resiliency and the courage and sacrifice of first responders. (AP)