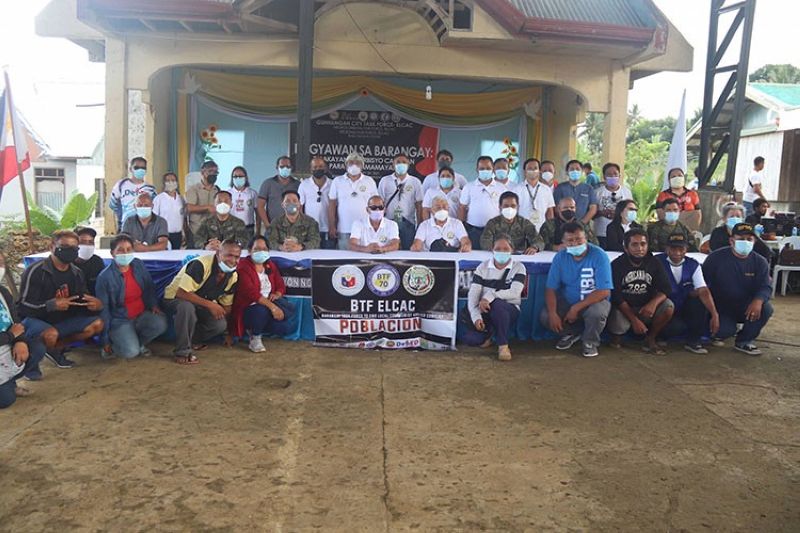 The activity was held at the covered court in Barangay Balugo, Guihulngan City on January 20, 2021.

The activity was highlighted by a workshop, participated by the five barangays.

Issues were raised and the concerned agencies pledged their commitment and formulated possible steps for faster delivery of basic services and resolution to the issues.

Meanwhile, Mayor Reyes lauded Samson of the 303 Infantry Brigade and Peña for their effort in Guihulngan City.

He said "peace should start from the barangay. The barangay official should cooperate with our Philippine Army and PNP to achieve peace. You have a government that will always be ready to support your needs, especially for your livelihood. I am glad that the TF-Elcac was created in Guihulngan City, which gives me hope to achieve the peace and development of our city. Mark my word, time will come when poverty in Guihulngan City is eliminated."

Flores, for his part, expressed his gratitude to members of the provincial and Guihulngan City TF-Elcac for implementing the Dagyawan sa Barangay, saying the activity "contributed well in addressing the grassroots of insurgency."

"I look forward to the sustainment of this holistic activity. Let us empower the Barangay Task Force-Elcac to support the City TF-Elcac and for the success of the NTF-Elcac. Let us collectively achieve what is written on these papers and make things happen. Thank you and let's go Guihulngan City," he said.