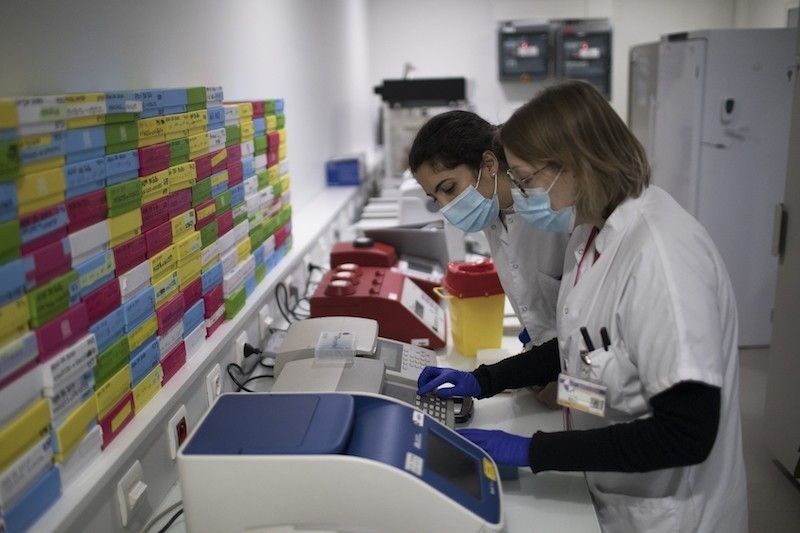 FRANCE. Medical technicians prepare samples at the University Hospital Institute for Infectious Diseases in Marseille, southern France, Wednesday Jan. 13, 2021, to study the highly contagious virus variant that has been discovered in the UK. (File)

THE more contagious B.1.1.7 variant of Sars-CoV-2 was found in a swab specimen collected in the Philippines on December 10, 2020, four days before it was announced in the United Kingdom (UK).

The new mutated version of the novel coronavirus was detected when the University of the Philippines (UP) Philippine Genome Center (PGC) backtracked and undertook genome sequencing on swab specimens that were taken from October to December 2020 following the confirmation of the first B.1.1.7 case in the country.

Dr. Edsel Salvana, director of the Institute of Molecular Biology and Biiotechnology at the UP National Institutes of Health, said in a virtual press conference on Saturday, January 23, 2021, that the patient with the December 10, 2020 specimen may have entered the country before the variant was identified in the UK.

“Part of our due diligence was to look back and then there was one sample (that was found positive for the new variant), pero, aside from that, mukhang wala naman anywhere else,” Salvana said.

Health authorities in the UK announced the new variant on December 14, 2020, but this version of Sars-CoV-2 had first appeared in September.

In the Philippines, the Department of Health (DOH) first confirmed the detection of the new variant on January 13. The patient, who developed pneumonia, had traveled to Dubai and returned to the country on January 7.

Sixteen more B.1.1.7 cases were confirmed on Friday, January 22, bringing the total variant cases to 17.

One of these 16 cases is a 23-year-old male from Calamba City, Laguna, who was swabbed on December 10, said medical specialist Alethea de Guzman of the DOH’s Epidemiology Bureau. He has completed isolation.

He is among the 14 local cases with no significant exposure and travel history.

Other local cases are 12 individuals from Bontoc, Mountain Provinces and a 22-year-old male from La Trinidad, Benguet.

Of the 12 cases in Bontoc, 11 come from one barangay. The earliest case was documented on December 31. All are under isolation.

Aside from the 14 local cases, there are two cases involving returning female overseas Filipinos, aged 47 and 64 years old.

They arrived from Lebanon via Philippine Airlines flight PR8661 on December 29, 2020.

They have recovered and were discharged from isolation on January 9 and 13. De Guzman said they indicated their addresses as Jaro, Iloilo City and Binangonan, Rizal.

“All these cases are under investigation to determine the source of infection,” De Guzman said in the same press conference.

She noted that coronavirus infections in Bontoc surged by 203 percent in the recent two weeks. The daily attack rate in the upland town increased three-fold, she added.

De Guzman said they were still assessing the data to determine whether the spike in infections is caused by a post-holiday surge or is related to the B.1.1.7 cases in Bontoc.

The new variant has been reported to be more contagious than the dominant version of the virus that is circulating worldwide.

Health officials assured, however, that as of Saturday, January 23, there is no evidence of community transmission of the new variant in the Philippines.

“Right now, there’s no evidence of community transmission, (but it) doesn’t mean that it’s not there. We will continue to look. But the fact that we detected this early and, also, isa lang ‘yung nakita dsa December, I think, as Dr. Wong had said, we detected this even earlier than UK,” Salvana said.

De Guzman said a total of 1,154 coronavirus-positive samples have been subjected to genome sequencing at the PGC as of Friday. (Marites Villamor-Ilano / SunStar Philippines)