4 universities: ‘We must retain independence, autonomy’ 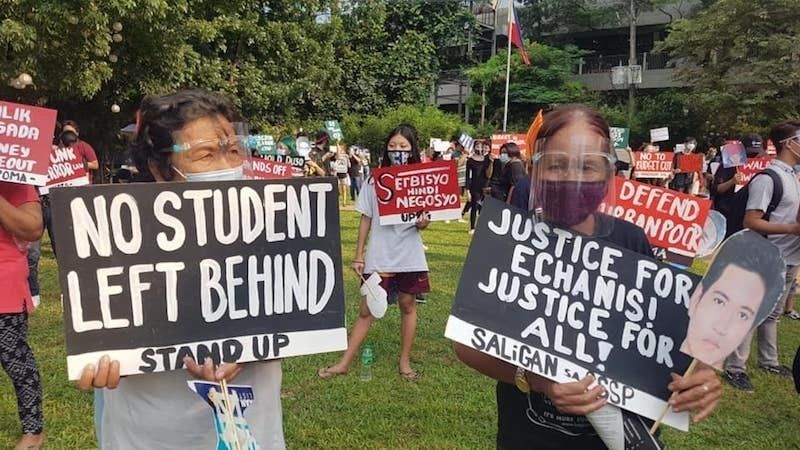 MANILA. Many student activists are members of Anakbayan, one of the organizations that the military alleges is a front for the communist movement. The group has denied the allegation and denounced the military for red-tagging. (File)

FOUR of the largest universities in the country on Sunday, January 24, 2021, jointly issued a statement objecting to the red-tagging by a military general and emphasizing that they “must retain independence and autonomy from the State.”

They issued the statement in reaction to the reported statement of Lieutenant General Antonio Parlade Jr. that their institutions were among 18 universities that serve as “recruitment havens” for the NPA.

“This charge, though, is really ‘getting old’ - a rehash of the public accusation the general made in 2018 irresponsibly since (it was) cast without proof,” the four university presidents stated.

They asserted that as Philippine schools, they “value the Filipinos’ basic constitutional rights of speech, thought, assembly and organization.”

“As universities with high aspirations for our country, we seek to direct our students to engage in acts that contribute to the strengthening of social cohesion, defend the country’s democratic institutions and promote nation-building,” they stated.

“And as institutions of higher learning that are stewards of the youth, repositories and producers of knowledge, and builders of communities, we must retain independence and autonomy from the State and other social institutions,” they added.

They take their primary responsibilities to promote learning and safeguard the rights of the young entrusted to their care as a sacred trust.

“We are committed to this mission and have always held ourselves accountable to our primary constituents, the learners, and by extension, their parents,” they added.

Their statement was issued a few days after the Department of National Defense unilaterally terminated the 1989 accord that prevents state forces from entering University of the Philippines campuses without coordination with the university administration.

To defend the abrogation of the UP-DND accord, the military has released a list of UP students and alumni who alleged died or were captured during operations against the NPA.

The list, however, included the names of living UP alumni who are not members of the NPA.

The military also alleged without providing proof that some schools have become recruitment havens for the NPA. (Marites Villamor-Ilano / SunStar Philippines)