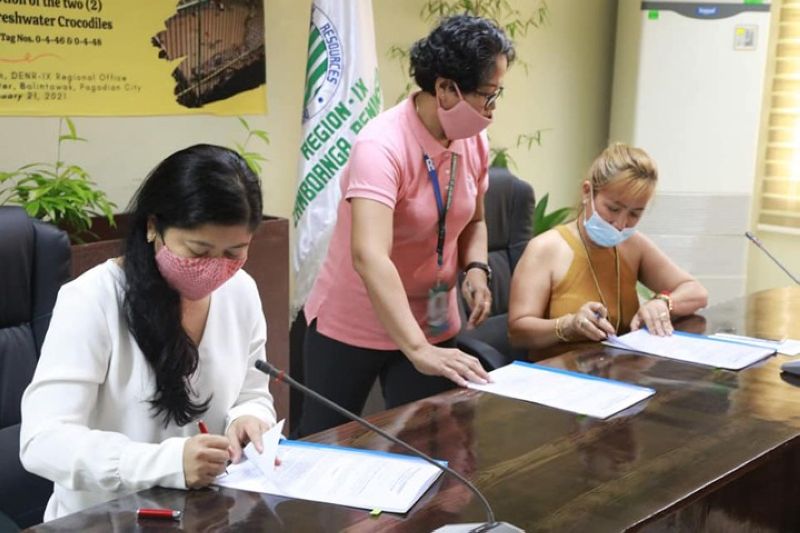 ZAMBOANGA. The Department of Environment and Natural Resources (DENR) inks a pact with a concerned couple for the adoption of two Philippine Fresh Water Crocodile in Zamboanga del Sur. The signatories are DENR Regional Executive Director Crisanta Marlene Rodriguez (left) and Roel Lamiing (not in photo) and his wife, Junevell, the vice mayor of Guipos, Zamboanga del Sur (right). (SunStar Zamboanga)

THE Department of Environment and Natural Resources (DENR) has entered into a memorandum of agreement (MOA) with a concerned couple for the adoption of two Philippine Fresh Water Crocodile in Zamboanga del Sur.

The MOA, which was signed Thursday, January 21, was in line with Department Administrative Order No. 2010-16, otherwise known as “Establishing the ‘Adopt-a-Wildlife Species Program’ and Providing the Guidelines Governing Its Implementation.”

“This partnership speaks of strengthened collaboration between the government and private individuals and through this, we hope to achieve resurgence of the Philippine Freshwater Crocodile population in the region, effectively conserve and protect this species through the active participation of stakeholders and raise the level of awareness on human-crocodile co-existence and stimulate public action in protecting our wildlife,” Rodriguez said.

She said the agreement stipulates the following areas of cooperation: research and monitoring, communication, education and public awareness, capacity-building and promoting best practices.

The MOA signing, which was held at the DENR regional office, was witnessed by DENR-Zamboanga Peninsula personnel from the Conservation and Development Division. (SunStar Zamboanga)