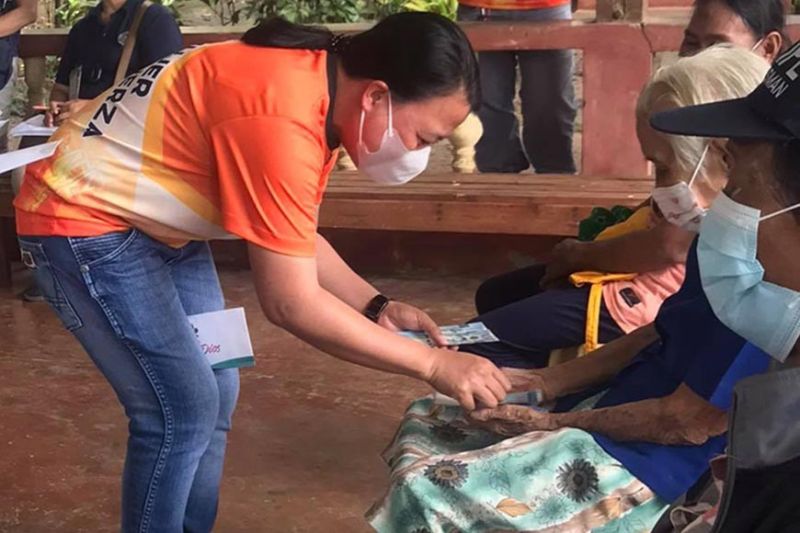 ZAMBOANGA. The city government starts the distribution of P20,000 cash incentive to 437 octogenarians and nonagenarians residents under Ordinance 539. A photo handout shows Councilor Josephine Pareja, the author of the ordinance, assisting in the distribution of the incentives to the beneficiaries. (SunStar Zamboanga)

OCTOGENARIAN and nonagenarian residents of Zamboanga City received cash incentives from the local government without having to wait until they turn 100 to avail of such benefit.

Socorro Rojas, City Social Welfare and Development Office (CSWDO) chief, said the grant of the cash incentive is under Ordinance 539, otherwise known as Giving Benefits to Octogenarian and Nonagenarian Residents in Zamboanga City, the latest benefit package for senior citizens unveiled during the administration of Mayor Maria Isabelle Climaco-Salazar.

Rojas said a total of 437 senior citizens across the city will receive P20,000 each as a cash incentive, which will ensure that senior citizens will have funds to buy necessities such as medicines.

She said the payout started January 18 and continued until January 21 for beneficiaries under CSWDO field offices 7, 1 and 6.

Rojas said January 22 to February 1 will be the schedule for field offices 5, 3 and 4.

She said the payout is spearheaded by her office and the Office of the Senior Citizens Affairs staff together with Vice Mayor Rommel Agan, Councilor Josephine Pareja, who authored the ordinance, Arturo Onrubia-Focal Person for senior citizens and officers from the Federation of Senior Citizens Association of the Philippines-Zamboanga City chapter.

At 100 years old (centenarian), senior citizens will receive a P50,000 cash incentive, which is the city's counterpart to the national government's P100,000 cash grant given through the Department of Social Welfare and Development under Republic Act 10868, the Centenarians Act of 2016. (SunStar Zamboanga)