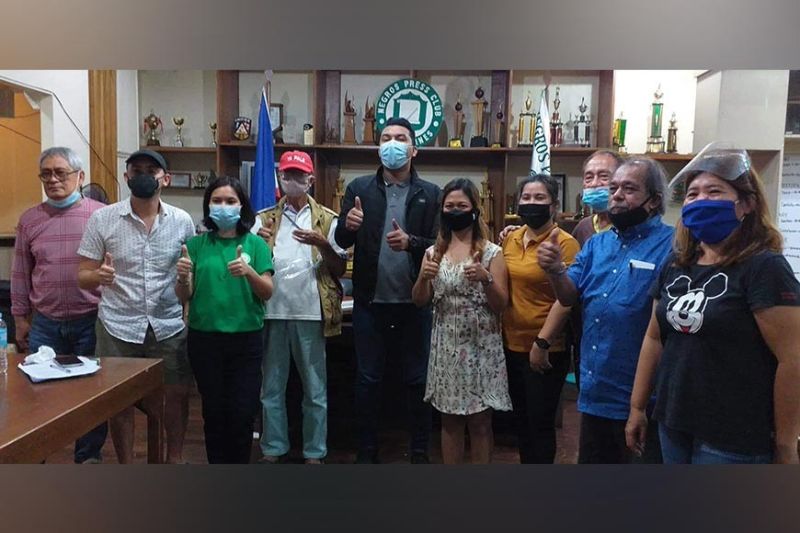 BACOLOD. The newly elected officers of the Negros Press Club led by incoming president Yves Montecillo (fifth from left) with members of the Comelec after the election of officers for 2021 to 2022 at the NPC Building in Bacolod City on Saturday. (Andy Alvarez photo)

A RADIO broadcaster was elected the new president of the Negros Press Club (NPC), the oldest press club in the country.

Yves Montecillo of DHYB RMN Bacolod was elected as president after garnering 69 votes against Rey Siason of Muews Radio, who only got 46 votes.

He will succeed incumbent president The Daily Guardian's Glazyl Jane Marie Masculino, whose term will end in March 2021.

The 29-year-old broadcaster is also the current president of the City Hall Press Corps and one of the media officers of the Asian Football Confederation (AFC).

Montecillo, in an interview after the election held at the NPC Building in Bacolod City on Saturday, January 23, 2021, thanked the members of the club for participating in the election amid the quarantine measures imposed in light of the coronavirus disease (Covid-19) threat.

Highlighting the efforts especially of the elder members to go out and vote, he said, "it's payback time. They voted for the younger ones and so it's our turn to serve them."

Montecillo, who is currently one of the club's directors, recalled that almost all programs and projects of the club lined up last year were wiped out by the pandemic.

For this year, he said the activities will depend on the situation taking into consideration the prevailing pandemic.

"We will surely prioritize our seniors. We will look for more subsidies for them. We will increase the burial and medical assistance," he said, adding that "election is over, let us start working again for the betterment of the club."

Joining him in the new set of officers for 2021 to 2022 is Eljohn Castaño of Radyo Bandera Sweet FM as vice president.

Garnering 58 votes, he won against Dolly Yasa of The Daily Guardian, who earned 52 votes.

The new NPC secretary is Nanette Guadalquiver of the Philippine News Agency. She won with 59 votes against Chrysee Samillano of The Visayan Daily Star with 46 votes.

Martian Muyco of Digicast Negros won against Elsie Jolingan of DYKB RPN and Negros Daily Bulletin as auditor. They got 60 and 43 votes, respectively.

The three other winners are Boy Duran of Aksyon Radyo with 62 votes; Carla Cañet of SunStar Bacolod - 57 votes; and James Toga of Negros Daily Bulletin - 55 votes.

Serving as members of the Comelec were NPC past presidents Edgar Cadagat, Eddie Dela Fuente, Edmund Aspero and Dolores Epacta-Miranda, along with Fred Salanga of Aksyon Radyo Bacolod.

In compliance with the minimum health protocols set by authorities particularly on the holding of mass gatherings, the club has forgone the annual general assembly.

During the election, only 20 members at a time were allowed to enter the building to cast their votes.

A total of 117 members cast their votes.

The use of face masks and face shields, as well as social distancing, were strictly observed.