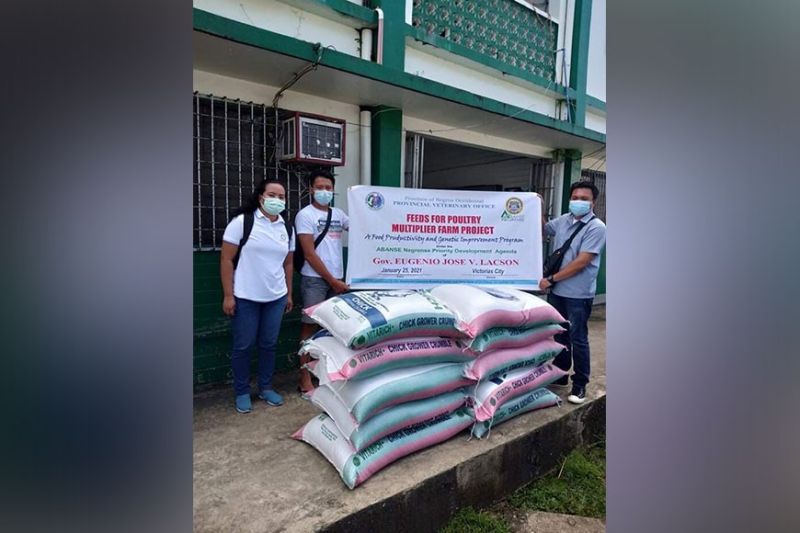 THE Provincial Veterinary Office (PVO) of Negros Occidental is distributing feeds to 24 poultry multiplier farms operated by local government units (LGUs) in the province as an input support to boost poultry productivity.

"This is a component of the establishment and enhancement of poultry multiplier farms project under the Provincial Animal Genetic Improvement Program (Pagip) for this year," he added.

Provincial Veterinary District IV Field Unit head William Detore and personnel led the distribution to the first batch of recipient-farmers including cities of Bago and La Carlota, and towns of San Enrique, Pontevedra, and Valladolid.

LGUs with multiplier farms in five other districts will receive the feed assistance on January 25 to 29.

Decena said the feeds distribution is timely due to weather disturbance experienced by some LGUs recently as this will augment their feeds counterpart.

The poultry multiplier farm project, he said, was established by the Provincial Government in partnership with the recipient-LGUs.

"This aims to sustain production efficiency of existing local breeds on free-range chicken and pekin ducks," he added.

Under the project, the Provincial Government provides for the construction of the building, perimeter fence, electrical installation, brooder cages, incubator, initial stocks and initial feeds.

The recipient-LGUs, on the other hand, take charge of the land area and operate the farm as a counterpart.

PVO records showed that existing free-range chicken multiplier farms in the province had an initial population of 1,585 breeding stocks. Some 4,170 heads were dispersed to farmer-raisers last year.

For pekin ducks, the farms initially raised 1,791 heads. Of which, 405 heads were dispersed last year.

Decena said the establishment and operation of multiplier farms is also a continuing project of the province through the PVO.

This is in consonance with the Abanse Negrense Development Agenda of the administration, with the goal of capacitating LGUs with production facilities and breeder animals for genetic improvement, he added.