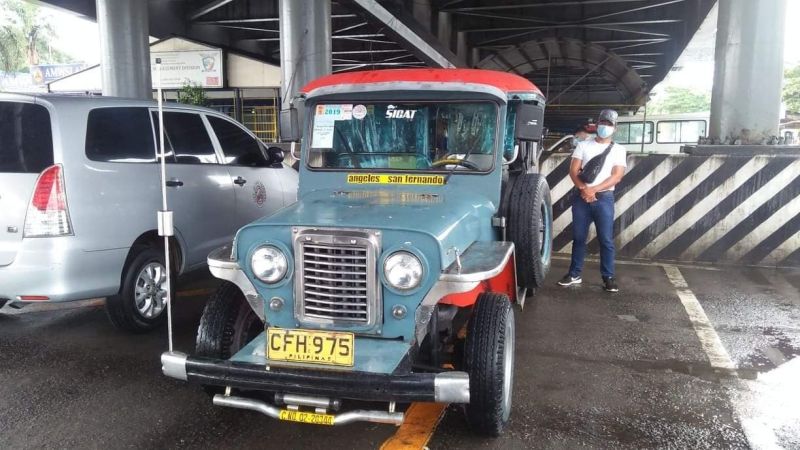 BACK TO OPERATION. This public utility jeepney under the Angeles-San Fernando Jeepney Operators Association is set to go back to its operation after its owner installed standard plastic barriers inside the unit which was flagged down last week by the City of San Fernando Police and City Public Order and Safety Coordinating Office for violating the public utility vehicles health protocol of the Land Transportation Franchising and Regulatory Board. (Contributed photo)

THE City Government of San Fernando, through the San Fernando Police and City Public Order and Safety Coordinating Office (CPOSCO), reiterated its call on all operators and drivers of public utility vehicles (PUVs) about Covid-19 health protocols.

This was after responding to a report that a public utility jeepney (PUJ) driver failed to implement physical distancing among its passengers and install prescribed plastic barriers inside his vehicle.

The City stressed its call relevant to a memorandum circular released by the Land Transportation Franchising and Regulatory Board (LTFRB) enumerating health protocol requirements for PUVs.

Passengers must be one seat apart inside PUVs and are only allowed to sit beside each other if plastic barriers are installed between them, LTFRB’s Memorandum Circular No. 2020-061 said.

The unit, its operator, and driver were identified to be supervised by the Angeles-San Fernando Jeepney Operators Association (Asfer Joda). The unit has a plate number of CFH-975 and its operator and driver reside in Barangay Dela Paz Norte and Dela Paz Sur of this city, respectively.

The case was first reported to San Fernando’s information office through a social media user’s comment during a live video on January 21 and was communicated with its Covid-19-related queries and concerns arm, the Crisis Communications Cluster, through Facebook Messenger.

The user’s report included details on the PUJ’s profile, with photos showing no plastic barriers were used and physical distancing was not observed.

The report, along with the photos, was then forwarded to the authorities for appropriate actions.

“Upon receipt of the said report, the police immediately coordinated and relayed the report to the board member of Asfer Joda. The police and the board member inspected the vehicle and it was noted that the plastic barrier used was substandard and does not pass the PUV transport health protocol,” said Police Lieutenant Colonel John Clark, CSF chief of police.

The driver and operator were ordered to install standard plastic barriers on the unit.

On January 25, CPOSCO, led by its chief, Louie Clemente, inspected the unit for its compliance and the presentation of an approved travel pass from CPOSCO before being allowed to operate.

It can be recalled that on the first week of May 2020, during the implementation of the enhanced community quarantine in the city, CPOSCO was one of the first few agencies in the country to launch the official PUJ designs that allow passengers to observe physical distancing.

The said action was in preparation for the subsequent declaration of General Community Quarantine where public transportation is allowed. (PR)