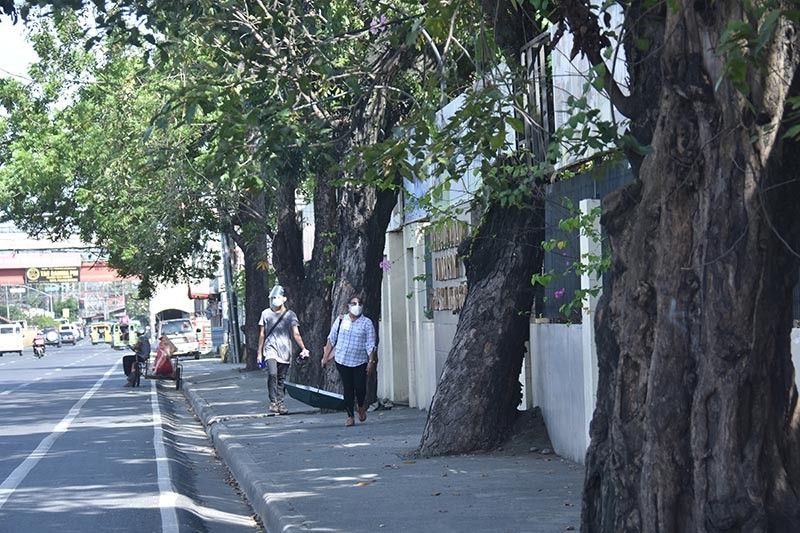 SPARED. These narra trees in front of the Ateneo Davao de University Matina campus were at risk of being cut down because of the proposed flyover project in the area. However, in January this year, the Department of Public Works and Highways announced that the project has been terminated. (Photo by Mark Perandos) 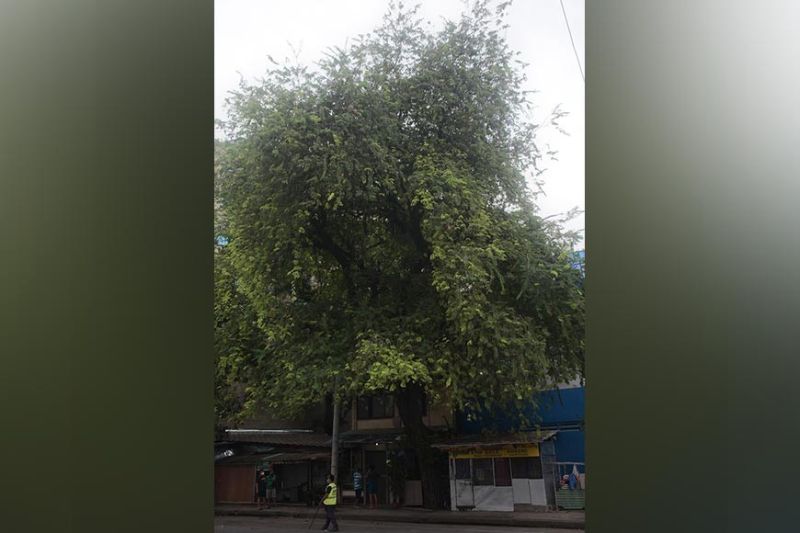 CENTURY OLD? The profiling conducted by Idis and its volunteer citizen scientists claim that this sampalok tree along Roxas Avenue is around a century old. However, the current methodology used in determining the age of the heritage trees relies on verbal accounts of people living in the area. A more thorough analysis to determine the exact age of the tree will hopefully be conducted soon. (Photo by Mark Perandos) 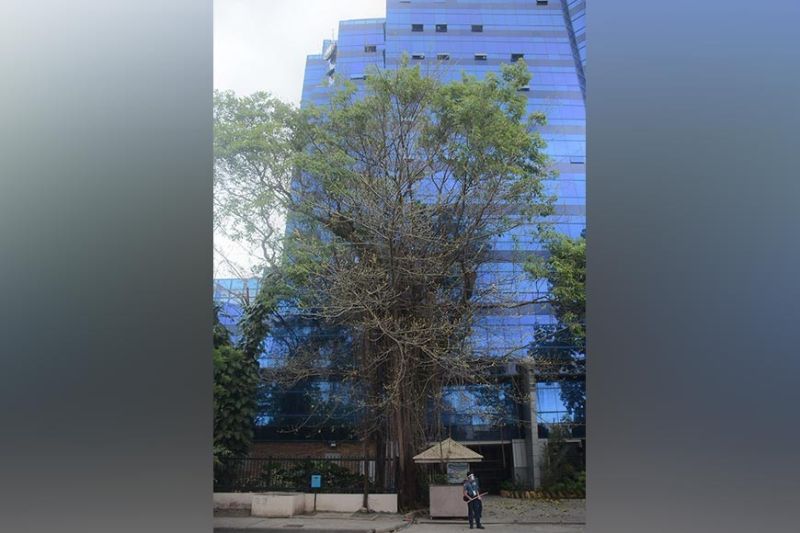 ENDANGERED. A balete hosts on a molave (tugas) tree outside the Ateneo de Davao University main campus along Rozas Avenue. Based on the Department of Environment and Natural Resources’ Administrative Order 2017-11, the molave is considered an endangered tree. (Photo by Mark Perandos)

FOR those passing by Pichon Street, it is a common sight to see commuters staying under the shade of a tangisang-bayawak while they wait for a jeep. You not only observe this along Pichon Street but also in other areas in the city where tall trees are.

These large trees have been providing shade to the people for decades. Their value and significance to the community and nature make them heritage trees.

Proposed House Bill 7804, also known as the Heritage Tree Act of 2020, defines a heritage tree as “any healthy native or endemic, exotic, rare, threatened, and endangered trees with a minimum girth of five meters (measure at one-half meter above ground) with consideration to the scientific rarity, historical, cultural, social, educational, and aesthetic significance of the tree.”

In a study conducted by the Interfacing Development Interventions for Sustainability (Idis), titled “Mapping and Profiling urban heritage trees in Davao City through Citizen Science,” the group discovered that districts in the city where there are a high built-up rate and population densities, there are 260 heritage trees.

These geo-tagged trees, identified and documented by Idis and 38 volunteer citizen scientists, are found in the Poblacion, Agdao, Buhangin, Talomo, Tugbok, Toril, and Calinan.

Exotic, non-native, or introduced tree species account for 67 percent of the identified heritage trees the Idis team identified within the scope of their study. Examples of these are acacia, mahogany, kamunsil, ipil-ipil, caimito, and fire tree, among others.

“These species are not endemic to our country and at the same time the bioregion of the country. Some of them are introduced coming from other biomes,” Lemuel Manalo, Idis Environmental Research Specialist, said. For example, he said the mahogany came from the Americas.

Meanwhile, native trees only account for 33 percent of the heritage trees identified. These are the narra, molave or tugas, agoho, antipolo, tangisang-bayawak, and kalumpang.

The study also found that 29 percent of the geo-tagged trees are mostly along pedestrian sidewalks and school campuses.

Manalo, during the presentation of the study on December 8, 2020, said most of the acacias were spotted in Marfori and the University of Immaculate Concepcion Bolton Campus. Narra trees were commonly found at the Ateneo de Davao University (Addu) Matina campus.

Based also on their profiling, Addu’s main campus along Jacinto Street and the Matina campus has a diverse set of heritage trees. Heritage trees identified in the Matina campus include acacia, lomboy, mahogany, narra, neem tree, sambong, and talisay. Trees at the main campus include acacia, caimito, mangga, mahogany, narra, nangka, talisay, sambong, and tugas, among others.

In terms of size, when it comes to tree trunk diameter, 36 percent of the identified heritage trees are classified as average. These are trees with a trunk diameter ranging between 30 centimeters (cm) to 60 cm. Trees that are classified as large (60 cm and above) account for 30 percent while extremely large trees (100 cm and above) account for 27 percent. An acacia tree at the Calinan Kidney Center was discovered to be the largest in terms of trunk size at 272 cm in diameter.

In terms of height, 53 percent of the identified heritage trees were of average size ranging between 10 meters (m) to 19 m. Short trees (less than 10 m) account for 25 percent while tall emergent trees (20 m to 50 m) account for 22 percent. The tallest tree the team found was an acacia tree at the Addu Matina Campus that was taller than the five-floor building beside it.

Manalo said several of the large trees are also located in the Marfori area.

In terms of tree age, 68 percent of the identified heritage trees are between 20 to 40 years old. These are mainly acacia, agoho, chico, and mahogany. Around 29 percent are trees aged 41 to 80 years old and include narra, acacia, and kamunsil.

Manalo said identifying the age of the heritage trees was the most difficult part of their profiling. When determining the exact age of the tree a lot of processes go into it to come out with a proper analysis. This may include counting the tree rings or extensive lab analysis.

“The method that we have adopted for the volunteers is they collected data through local knowledge by asking the local communities,” he said. Confirmation of the tree’s age was also done by checking old photos.

“Some of the very old trees are found in the Ateneo Matina campus, which is the Acacia trees,” Manalo said, adding that the trees in the campus are also tall emergent trees.

Meanwhile, the study also showed that heritage trees are playing a huge role in ensuring the air quality of the city.

Based on their calculations, 158 of the 260 heritage trees were able to sequester 1,934,274 kilograms (kg) or 1,900 tonnes of carbon dioxide in the last 35 to 40 years. This is heavier than the Statue of Liberty in New York. The trees with the highest carbon sequestration are acacia, narra, mangga, mahogany, and talisay.

Manalo said the trees also have a large socio-economic impact on the community. For pedestrians, the trees provided shade. It was also observed that street vendors stationed under the trees tend to attract more customers. The trees provided a natural waiting shed for commuters and helped increase walkability.

“Nearby street communities such as vendors, commuters, traffic enforcers have high respect and value for the trees covering them from too much heat,” Manalo said.

The trees in schools and hospitals contributed to the mental well-being of people. In schools, it provided shade to students.

For residential areas, the trees were observed to have reduced glare and noise pollution, served as a windbreak, and had a cooling effect on the area.

Sady many of these large heritage trees around the city are under threat due to mass urbanization.

“While there are still a lot of trees existing in the urban areas, they are continuously being threatened to be destroyed, cut, or removed,” Manalo said.

In general, the trees are under threat due to construction and infrastructure development.

For example, in 2019, several trees were cut along the Davao River to make way for an embankment project. Also in the same year, decennia-old trees at Clifford Park along Roxas Avenue were cut to make way for a park rehabilitation project.

Last year, decades-old Narra trees outside the Ateneo de Davao University Matina Campus were put at risk following the proposed flyover project in Matina. Fortunately, the trees have been spared after the project was terminated by the Department of Public Works and Highways.

Manalo said some trees are also being used as a collection area for waste.

In a bid to protect the heritage trees, Idis is urging the city council to pass a local ordinance that will protect and preserve the heritage trees and other existing trees in Davao City urban centers from removal, cutting, damaging, and other interventions that are detrimental to the health of the trees.

“All remaining urban trees, regardless of ecological distribution and conservation status -- native, endemic, exotic, or introduced should be protected and preserved,” Manalo said.

Recently, Councilor Diosdado Mahipus Jr. proposed an ordinance regulating, if not prohibiting, the cutting of old trees in the city. This developed after the trees in front of Addu’s Matina campus were put at risk of being cut down due to the Ma-a flyover project.

“As we all know, we do not have an existing local policy that mandates the protection and conservation of trees, much more of the remaining old native trees in the urban areas. We want to contribute to addressing air pollution through the protection of existing heritage trees in the urban areas of Davao City,” Chinkie Pelino-Golle, former Idis executive director, said.

On the national level, Davao First District Rep. Paolo Z. Duterte and ACT-CIS Rep. Eric Go Yap have filed House Bill 7804, also known as the Heritage Tree Act of 2020, on October 1, 2020. The proposed bill is pending with the House Committee on Natural Resources.

“Our heritage trees are living testament to how a community values its natural environment,” Davao City Mayor Sara Z. Duterte-Carpio said in a message during the presentation of the Idis’ study.

She added that the study will “make a difference in ensuring that we pursue development without sacrificing these natural resources so that future generations of Dabawenyos will be able to see and appreciate the beauty, the majesty, and the value of our heritage trees.”

“Our trees witness and will continue to witness the history of our city as some trees are older than us. If we continue to document this project, we can cover more areas and see more trees that are over 100 years old,” Mary Ann Fuertes, Idis Board of Trustee, said.