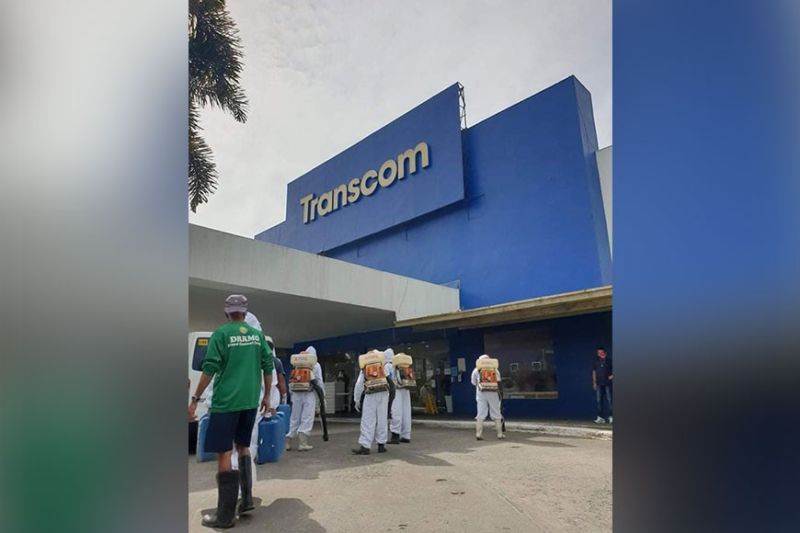 BACOLOD. Personnel of the City Disaster Risk Reduction and Management Office conduct disinfection and decontamination at the premises of business process outsourcing firm, Transcom Bacolod, in Barangay Tangub on Monday, February 1, 2021, following reports that 41 of its employees tested positive for coronavirus. (Photo by Adrian Prietos)

ASIDE from Transcom Bacolod, five more business process outsourcing (BPO) companies in the city have failed to implement the "Covid-19 Contact Tracing System Ordinance of Bacolod City," an official said.

Dr. Chris Sorongon, deputy for medical data and analysis of Emergency Operations Center (EOC) Task Force, said that all BPO firms in the city have already registered in the BaCTrac System, but some of them failed to impose it within their buildings.

The "BaCTrac Contact Tracing System" is a web-based and mobile-based app developed for efficient and expeditious contact tracing of confirmed coronavirus disease (Covid-19) positive patients in the city and, consequently, allows the EOC Task Force to easily locate people suspected of having contact with Covid-19 patients.

Though he did not name the erring BPOs, Sorongon said these firms failed to follow the actual use of the city's contact tracing system for their respective employees.

"There's no record of activities as far as the registered call center company is concerned. It is registered but the people going in are not scanning their BaCTrac," he said in a radio report.

Under the ordinance, penalties ranging from P1,000, P2,500 and P5,000 and/or imprisonment for not more than six months for the first, second, third and succeeding offenses, respectively, await private establishments and government offices that fail to comply.

On Sunday, the EOC Task Force confirmed that at least 41 employees of Transcom Bacolod in Barangay Tangub have tested positive for Sars-CoV-2, the virus that causes the coronavirus disease (Covid-19).

Following this, Vice Mayor El Cid Familiaran, chairman of Bacolod City Inter-Agency Task Force (IATF), said they then held an emergency meeting with Mayor Evelio Leonardia along with the members of the EOC Task Force.

He said they started monitoring the BPO company on January 23 after one of its employees, a 21-year-old male resident of Barangay Bata, yielded a positive result.

"Of the 41, 33 of them are residents of Bacolod City while eight others are from other towns and cities in Negros Occidental," he added.

Those who tested positive for the virus were already brought to the city's quarantine center.

Leonardia, for his part, ordered the temporary closure of Transcom Bacolod within 24 hours for disinfection and decontamination.

The vice mayor said the EOC Task Force also served the notice of violation to the company Monday, February 1, particularly for failure to implement the BaCTrac System.

Since they failed to impose the ordinance, Familiaran said, the EOC is also facing difficulty on the conduct of contact tracing.

Transcom Bacolod has yet to issue a statement.

"It's a workplace transmission so the public should not be complacent and always follow the health protocols such as the wearing of face masks, face shields and the observance of social distancing," he said.

The official added that the City Government will also send letters to all other BPO companies to remind them of what happened to Transcom, hoping that it will not happen again.

No effect to quarantine status

Allaying fears of a possible lockdown in the city, the City IATF head said the positive Covid-19 cases in the BPO company will not affect the quarantine status of the city.

"We still have one month, so it could not affect our quarantine status, which is modified general community quarantine (MGCQ)," he said.

On Sunday, Mayor Evelio Leonardia signed Executive Order (EO) 02 for the extension of MGCQ in Bacolod City from February 1 to 28.

Familiaran said the mayor has yet to call a meeting to discuss the request of the business groups to lift the curfew hours and liquor ban, particularly for those 23 years old and above.

The local business community, in a position paper, said the move will help spark opportunities for evening businesses in the city amid the prevailing Covid-19 pandemic.

Currently under a more relaxed MGCQ, the city continues to implement the 11 p.m. to 4 a.m. curfew and partial liquor ban that allows the purchase of alcoholic beverages only from 12 noon to 6 p.m.

As of January 31, Bacolod City still has 151 active cases.

The figure forms part of 5, 748 total confirmed cases. Of the number, 5,413 patients have already recovered and 184 have died.

On the same day, Bacolod City has a total of 13 new cases with no new deaths. (With reports from Erwin Nicavera)