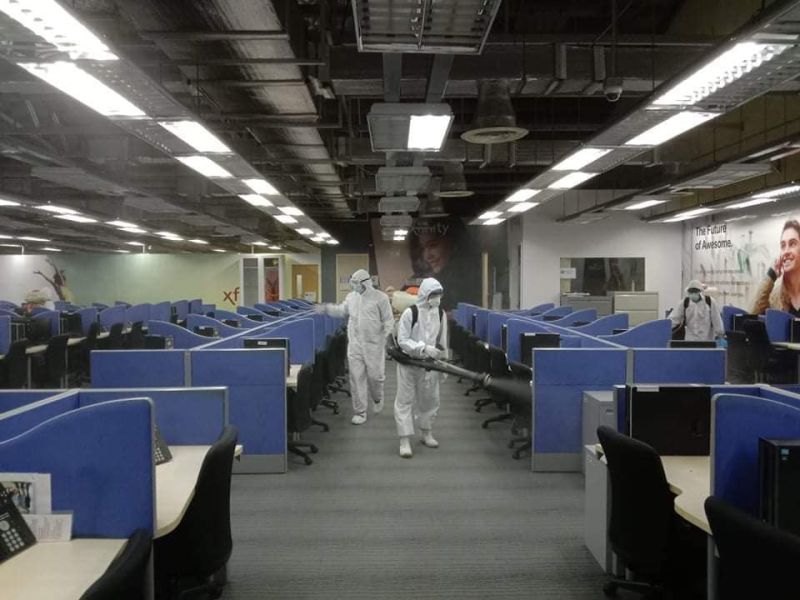 BACOLOD. Personnel of the Bacolod City Disaster Risk Reduction and Management Office conduct disinfection and decontamination at the premises of Transcom’s site in Barangay Tangub in Bacolod City after 41 of its employees tested positive for the coronavirus. (Bacolod CDRRMO photo)

FOLLOWING the incident where 41 of its workers in Bacolod City have tested positive for the Covid-19 virus, the management of Transcom said the safety of employees, their families and the larger community has always been a key priority of its fight against the virus.

The business process outsourcing (BPO) firm, in a statement, said it is committed to continuing in taking appropriate actions in unison with the local government.

Transcom confirmed that its site in the city, particularly in Barangay Tangub, recently participated in a surveillance testing conducted by the city government after 14 of its employees tested positive for the Covid-19 virus using the company's mandatory antigen testing and subsequent reverse transcription-polymerase chain reaction (RT-PCR) testing from January 23 to 28, 2021.

The firm said the Bacolod City Government’s surveillance RT-PCR test, which was conducted on 598 employees on January 29 and 30, generated 27 more positive cases, closing the total number of cases at 41 or 6.45 percent of all personnel who were tested from January 23 to 30.

“In compliance with the local government’s order for disinfection received on February 1, the site will be temporarily closed for 48 hours,” it added.

Transcom said to further support local authorities in the next coming days, all of its Bacolod onsite personnel were required to undergo antigen testing every seven days instead of the usual 14-day interval.

The company has developed its quick response (QR) code-enabled process to enforce this policy, it said.

The Emergency Operations Center (EOC) Task Force earlier scored the company for its failure to implement the BaCTrac System. A notice of violation was served by the city government.

Aside from Transcom Bacolod, five more BPO firms in the city were found to have failed in implementing the “Covid-19 Contact Tracing System Ordinance of Bacolod City.”

Dr. Chris Sorongon, deputy for medical data and analysis of EOC Task Force, said all BPO firms in the city have already registered in the BaCTrac System but some of them failed to impose it within their buildings.

The “BaCTrac Contact Tracing System" is a web-based and mobile-based app developed for efficient and expeditious contact tracing of confirmed coronavirus disease (Covid-19) patients in the city and, consequently, allow the EOC Task Force to easily locate people suspected of having contact with Covid-19 patients.

Though he did not name the erring BPOs, Sorongon said these firms failed to follow the actual use of the city’s contact tracing system for their respective employees.

“There’s no record of activities as far as the registered call center company is concerned. It is registered but the people going in are not scanning their BaCTrac,” he earlier said in a radio report.

Under the ordinance, penalties ranging from P1,000, P2,500 and P5,000 and/or imprisonment for not more than six months for the first, second, third and succeeding offenses, respectively, await private establishments and government offices that fail to comply.

The EOC Task Force has scheduled an inspection for the management of Transcom yesterday to review its minimum health protocols and the standards of their operation inside the building.

Transcom said to ensure safety among employees, it has invested in initiatives to prevent the spread of infection, especially within its sites.

The company said common areas and workstations in the production floors were reconfigured to comply with the required one-meter safe distance and transportation assistance given to employees through a point-to-point shuttle service system that follows social distancing guidelines.

Antigen testing is also conducted on all its onsite employees, including third party personnel, every 14 days. Teleconsultations or health checks conducted by medical personnel are conducted to employees who are returning to the site or have not reported to the site for seven days.

“Transcom has also transitioned 75 percent of its operations to work at home since the start of the second quarter in 2020,” it said, adding that “the company spent more than seven million dollars in 2020 for business continuity initiatives that focused on ensuring the safety of its employees.”