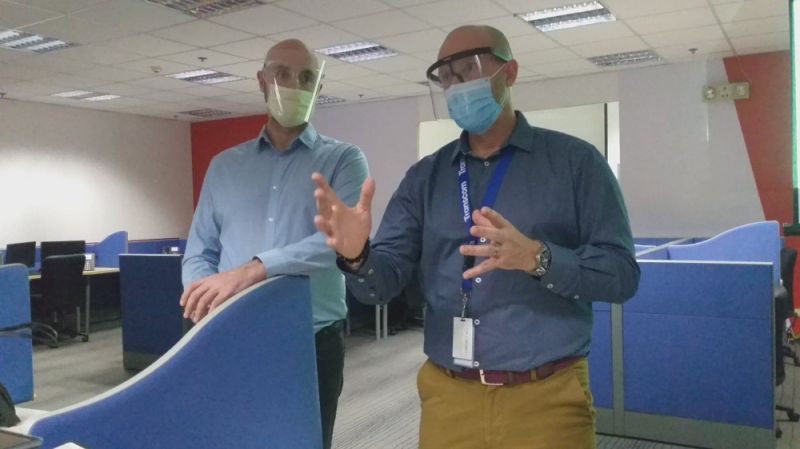 OUTSOURCING firm, Transcom, has remained committed to expanding its operations in Bacolod City amid the challenges hounding the industry, especially those brought about by the prevailing coronavirus disease (Covid-19) pandemic, its top officials said.

Transcom Worldwide’s chief executive officer for Global English Region Mark Lyndsell, who visited their Bacolod site in Barangay Tangub recently, said Bacolod City is one of their largest sites anywhere in the globe.

Lyndsell said employing about 2,900 people, Transcom has been operating in the city since 2009.

“We are committed to this location,” he said, adding that the company is currently facing challenges that have made significant changes in the information technology-business process management (IT-BPM) industry.

He said many of their clients are from the United States and other parts of the world, who have recently changed their strategies and approaches to outsourcing.

Lyndsell said the pandemic has changed the clients’ view quite traumatically.

Every time a site is locked down such as this and there’s disruption to protect the community, that forces them to question the capacity of the location to deliver the services, he said.

“We would love to expand here, but right now, our clients are the ones dictating that,” the Transcom executive added.

This was after 41 of its employees were tested positive for the coronavirus.

The company officials said that what happened will not affect their relationship with the city government.

“Our presence shows that we have the best of relationships going forward,” Lyndsell said, adding that “as we operate here as a business, I feel very obligated to support the 2,900 folks who depend on us and I don’t want to let those people down.”

Buckley, for his part, said they are banking on the strong talent pool in Bacolod City.

“We have been capitalizing on these things. In fact, many competitors are following us here because they recognized the quality of our talent pool,” he said, adding that now, with work at home as an option, they would like to see how to continue the investment and development of their site in the city.

Meanwhile, the resumption of the company’s onsite operation was moved on Tuesday from the initial schedule of Monday, February 8.

Of the total number of workers, 95 percent are currently working offsite or work-from-home.

EOC Task Force Deputy for Medical and Data Analysis Dr. Chris Sorongon said the 121 Transcom employees who are set to go back to work at the site have already been re-swabbed on Saturday upon the request of the company.

Sorongon said the results are yet to be released. If in any case, some of them yielded positive results, they will be extracted from their homes and be isolated while their close contacts will be traced.

“They [Transcom] have yet to do their last-minute general cleaning and setup based on our recommendations like installation of purifiers and additional exhaust fans at their work stations,” he said, adding that “by Tuesday, once everything is ready they can be operational.”

As Transcom starts its onsite operation on Tuesday, the EOC Task Force is set to conduct another round of inspection at the site to ensure full compliance to health and safety protocols set to prevent another outbreak within the workplace.

In a virtual courtesy call with Bacolod Mayor Evelio Leonardia Friday, Transcom’s top executives lauded the city government for the assistance given by the city as far as the recent outbreak is concerned.

Sorongon said both parties agreed to closely coordinate with each other as far as the city’s information-education drive, access to the site during interventions, and other purposes.

He said the mayor recognizes how crucial the partnership of the City Government of Bacolod with Transcom is, especially that they have been providing thousands of jobs for the residents.

Transcom is already in talks with the executives of Moderna, an American pharmaceutical and biotechnology, for the possible purchase of vaccines for its employees.

Sorongon said it might be a two-way approach because the BPO company can directly transact with Moderna for vaccine procurement or avail of the AstraZeneca vaccines that the city is also providing for the residents.