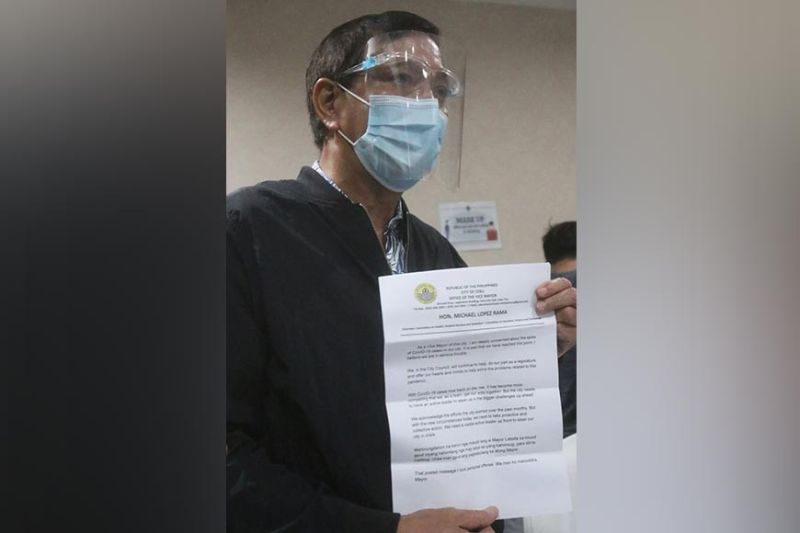 The mayor has been working from home since Jan. 25, 2021 after he was discharged from the hospital for an ear infection. He did not say what caused the infection or if both his ears had been infected.

In earlier interviews, Labella said he was only heeding his doctor’s advice to avoid crowds.

However, Vice Mayor Michael Rama wants Labella to put to rest any lingering doubts about his health by divulging his current condition.

Rama said Labella needs to be on top of the situation, especially with the recent spike in the number of coronavirus disease 2019 (Covid-19) cases in the city.

He said the city needs to have “a visible and active leader” who will lead the fight against the pandemic.

“With Covid-19 cases back on the rise, it has become more compelling that we, as a team, get our acts together, but the city needs to have an active leader to steer us in (facing) the bigger challenges up ahead,” he said

When asked if he knew what Labella has, the vice mayor would not answer the question.

“Lisod gyud kaayo og ako’y moingon sa akong nahibaw-an (It wouldn’t be prudent on my part if I reveal what I know),” Rama said.

However, he said Labella should make the announcement.

“Di mahimo nga di maklaro (But it can’t go on like this,” he said.

When told about Rama’s challenge, Labella said, “I’m going to tell them” and changed the subject.

Labella said he will appoint Rama to oversee the Covid-19 response in the city and to work with the Emergency Operations Center.

He said he will designate Rama to be part of the process in fighting against Covid-19.

When asked about their relationship, both Labella and Rama said it is “intimate,” with the mayor adding that he and the vice mayor are like “brothers.”

Although they haven’t seen each other for some time, the two friends said they are in constant communication.

During Sunday’s press conference, Rama was asked if the recent development will have any effect on his political plans or on Partido Barug, which was originally called Barug Team Rama when it was formed in 2012 to support his mayoral candidacy after he bolted from Bando Osmeña Pundok Kauswagan in 2011 and of which Labella is a member.

Rama said no one can stop him if he runs for mayor in next year’s elections.

Labella, for his part, said he doesn’t foresee going up against Rama for the mayoral post in 2022. He did not elaborate.

During the City Council’s regular session on Friday, Feb. 5, Rama brought up the possibility that there was something more to the mayor’s absence.

“Let’s not be naive,” the vice mayor said. “There is something wrong.”

An emphatic Rama quoted a line from William Shakespeare’s play “Julius Caesar” and urged Labella to do the right thing “if you think you cannot go back to City Hall.”

However, the mayor released a statement, asking Rama to put aside politics.

“We have a disease to contain. We have people to help and we have an economy to rebuild... The city needs all of us to work together, my dear friend,” Labella said. (JJL)