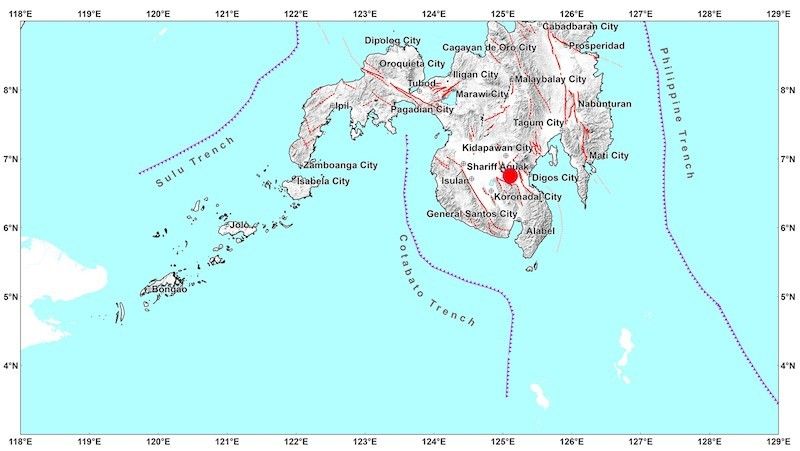 FIVE persons in Cotabato province were hurt during the earthquake that shook parts of Mindanao Sunday, the National Disaster Risk Reduction and Management Council (NDRRMC) said on Monday, February 8, 2021.

Two houses in M’lang and Kabacan in Cotabato were destroyed while 19 were damaged.

Two churches in M’lang, a hospital in Isulan in Sultan Kudarat and two private establishments in Kabacan were also damaged.

Eight landslides were reported in Soccsksargen. Seven occurred in Makilala and one in M’lang, both in Cotabato.

The NDRRMC said Cotabato is over 65 kilometers away from the epicenter of the quake, which was near Magsaysay, Davao del Sur.

The City Government of Kidapawan and Department of Education Cotabato School Division suspended work for February 8, 2021, from 8 a.m. to 12 noon, to give way to structural assessment.

In Davao Region, 45 persons in Davao City were displaced and evacuated to the University of the Philippines (UP) Mindanao Facility and staff housing- temporary treatment and monitoring facility due to the quake.

Power supply problems were experienced at the Davao Light and Power Corporation as well as in Davao del Sur.

The Philippine Institute of Volcanology and Seismology (Phivolcs) initially said the earthquake had a magnitude of 6.3, but revised this to 6.1.

It was felt in the following areas:

On Monday morning, at around 8 a.m., another earthquake with a magnitude of 5.7 hit Davao del Sur. The epicenter was near the municipality of Governor Generoso.

Phivolcs said no damage and aftershocks were expected. (SunStar Philippines)