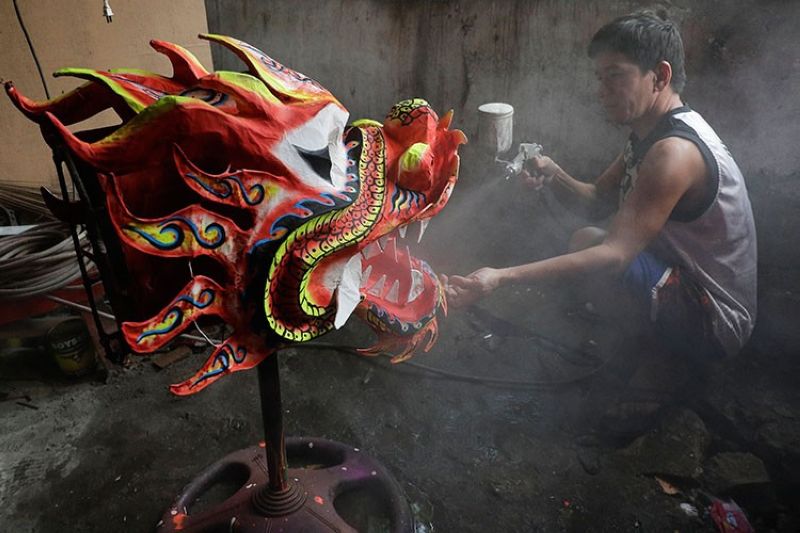 MANILA. Robert Sicat sprays a protective coating on a Dragon head at a creekside slum at Manila's Chinatown, Binondo Philippines on February 4, 2021. (AP)

RAUCOUS dragon dance shows have been banned in Manila's Chinatown due to the pandemic, casting aside a crowd-drawing Lunar New Year tradition many believe helps drive misfortunes away.

The Philippine government's ban on large public gatherings and street parties to fight the coronavirus dealt a big blow to hundreds of dragon dancers and production crews who are struggling to find other sources of income.

"There would have been large crowds wanting to drive away the misery and bad luck, but our street dance shows were prohibited this year," said Therry Sicat, a Filipino slum-dweller who with his siblings manages one of several dragon dance troupes in Chinatown.

"If we had 100 percent fun in the past, I only feel 30 percent of that this time around. It's really depressing," said the 31-year-old, whose wife is pregnant with their fourth child.

The absence of the dragon dances is a palpable sign for many Manila residents that the pandemic crisis that shut down much of Manila's economy and locked down millions of Filipinos in their homes is spilling over well into this year. But Sicat, his siblings and their families are fighting to keep the Chinese tradition - and their livelihood - alive.

After the dragon dances were banned by Manila's mayor, Sicat and his family used their Styrofoam, paint and other dragon costume-making materials to craft decorative miniature Chinese-style lion heads instead. The colorful items have become a hit online and fill their small creek-side home with hope and joy. About 200 have been sold so far, priced at 1,500 pesos ($30) each, he said.

Other members of his dragon dance troupe, which employs about 50 dancers, have set up online food businesses or are working as motorcycle food deliverymen to make ends meet, Sicat said.

Sicat's profits from the decorative lion heads are just a fraction of the income generated by their dragon dance shows in the past. During the busy Lunar New Year season in past years, a Chinatown business establishment would pay 35,000 pesos ($720) for a session of dragon and lion dancing accompanied by drummers and merrymakers for good luck.

Sicat still brims with optimism despite the dire economic times in one of the countries hardest hit by the pandemic in Southeast Asia. He said he looks forward to the return of the hope-inspiring dragon dances and to hearing the drums again.

"There's no Chinese New Year, but we are all healthy. We can survive this pandemic," Sicat said.

The Philippines has reported more than 540,000 Covid-19 cases, the second highest number in Southeast Asia after Indonesia, and 11,296 deaths. It is negotiating with seven Western and Asian pharmaceutical companies to obtain Covid-19 vaccines, with the first batches expected to arrive next week.

About 70 million Filipinos are to be vaccinated with the hope that it will help Manila's devastated economy bounce back. (AP)