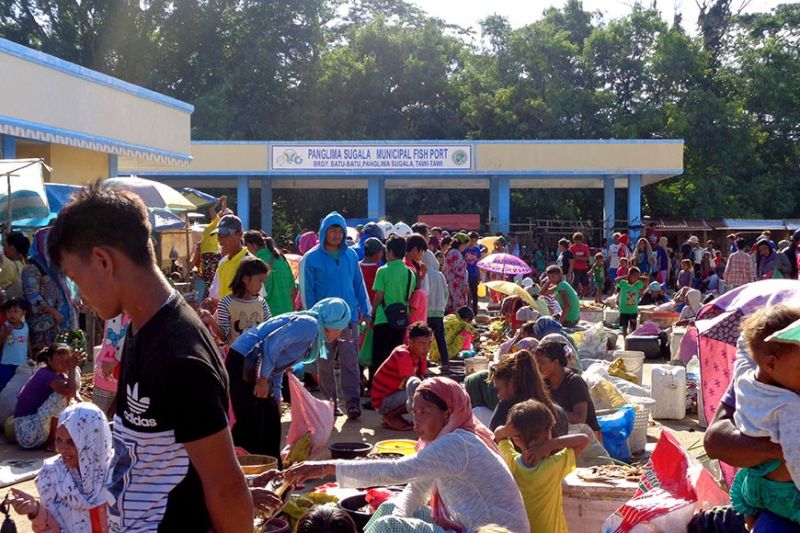 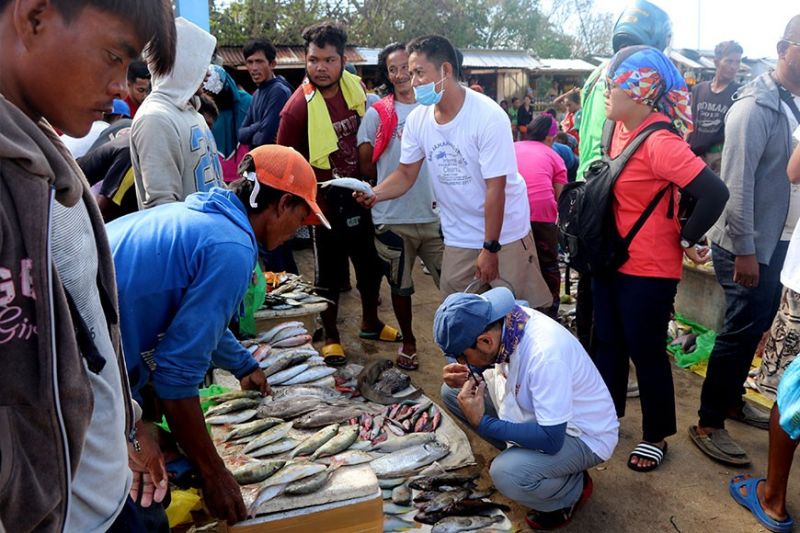 MINDANAO. Dr. Cleto L. Nañola Jr., head of the Coral Reef Resiliency and Ecology Studies Laboratory in UP Mindanao, looking at the variety of reef fishes on display in Panglima Sugala. (Photo by Argamar Habbibudin) 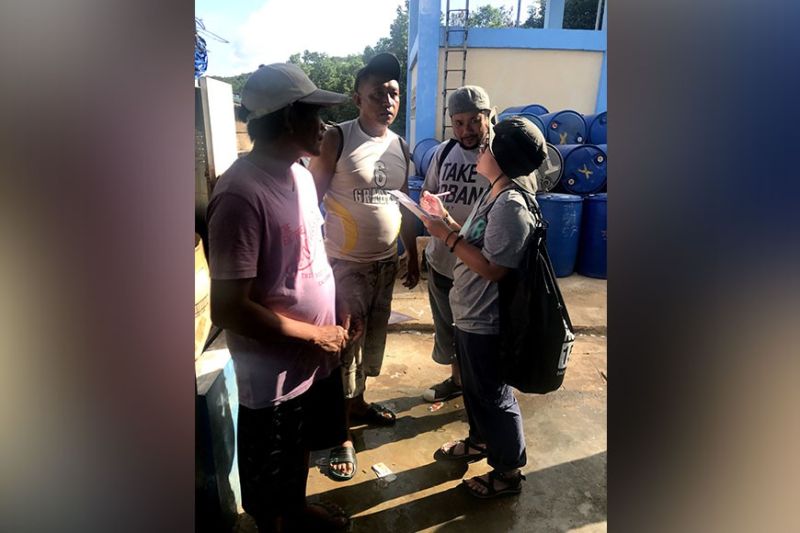 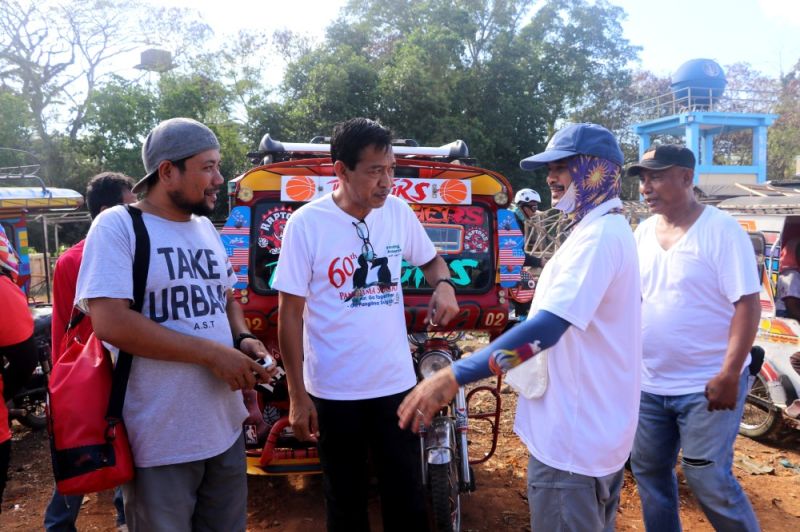 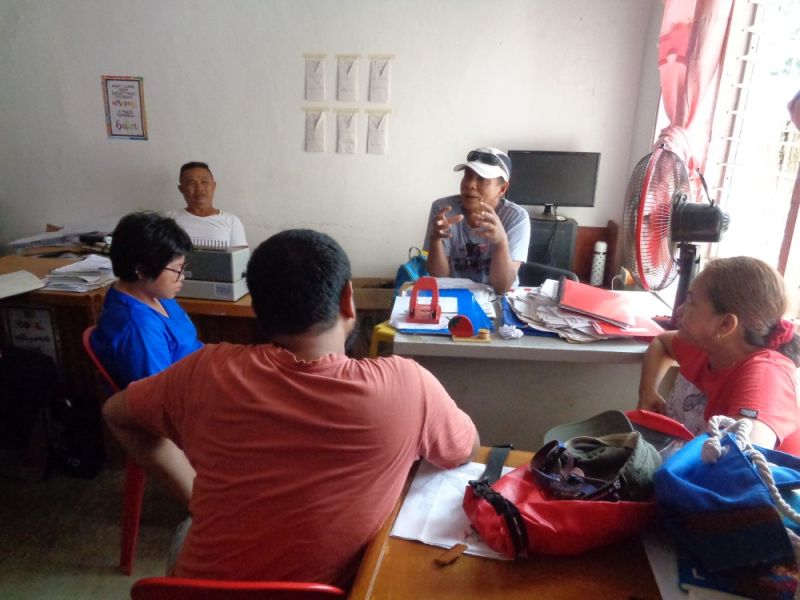 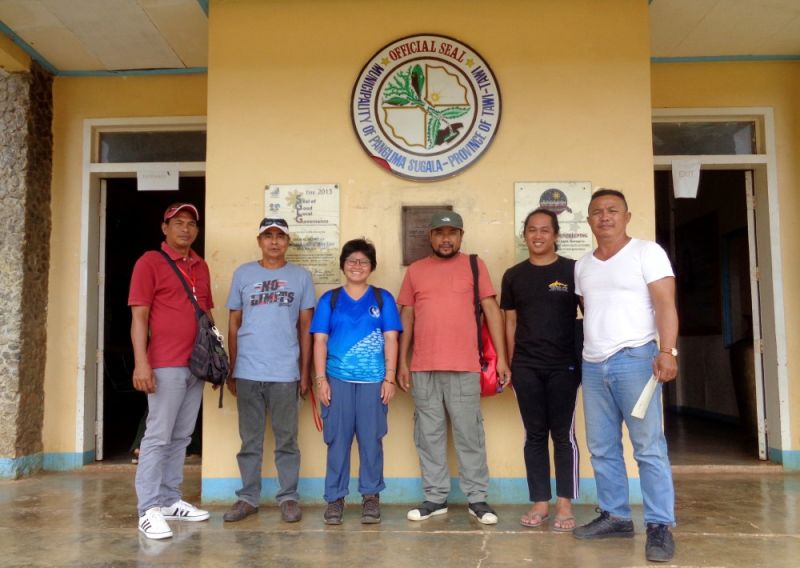 MINDANAO. MPDC staff with the UP Mindanao personnel and Joey Cabasan from UPLB-MSI (2nd from the right) at the Panglima Sugala Municipal Hall. (Photo by Mary Jean Cabaño)

PANGLIMA Sugala's barter market, which only takes place on Saturdays and Sundays, is unlike any market that I've been to before. Here, sights and sounds come together, discordant and dissonant but perfectly in time to its own thriving pulse. Here, you won't see weighing scales, only products sold by "tapok." A tapok worth P50 could get you about five fish, a P100 tapok can have as many as eight or more fish in a set.

We visited the market as part of our fish collection and survey for the training-workshop on laboratory techniques and data analyses for fish biology held at the Mindanao State University-Tawi-Tawi College of Technology and Oceanography (MSU-TCTO) from February 26 to March 3, 2020.

The activity was organized by the Coral Reef Resiliency and Ecology Studies (Crrest) Laboratory and the MSU-TCTO, with support from MSU-TCTO, Ched Dare to Beam Project, and DOST-PCAARRD.

The market is about 30 kilometers from the campus and we were fortunate enough to witness the bounties of the sea, from seaweeds to reef fishes. The vendors, mostly locals and the sama di laut, display their wares, most of which have been freshly caught.

Upon entering the barter market, I noticed an absence of display tables. All the goods are placed on top of sacks or used tarpaulins, laid out for potential buyers to see. There is no particular arrangement of products; you will get to see a mish-mash of colors and goods overlapping. Seaweeds touching fish touching shells.

Panglima Sugala's barter market exercises the barter trade in its truest sense. I have seen agricultural products, such as bananas and coconuts, being traded for marine products. The sama di laut vendors, stooped, overlooking their wares, have the exchanged goods placed in piles at the back of their space.

After collecting our samples and having a spread of some of the local delicacies for breakfast, we returned to the MSU-TCTO campus.

In Panglima Sugala, it seems that the sun is always shining, the waters always so pristine.

Despite its organized chaos, however, it's a testament to the changes that have affected the fisherfolk and vendors alike.

Going back to Panglima Sugala on a weekday was like being transported to a different place. Gone were the multitudes of vendors and buyers. There were no displays laid out on mats, only the usual stalls inside a covered complex. There was no hectic buzz. The parking lot, which had been populated by tricycles, motorcycles, jeepneys, and private cars, was almost empty. The open sea only had a handful of small fishing boats.

I was accompanied by Mr. Roger Irilis, who himself was from Panglima Sugala, to conduct an interview with some of the local vendors and officials from the local government of Panglima Sugala.

Meeting the locals of Batu-Batu

Our first interviewee was Omar Amin, a 44-year-old fish vendor from Batu-Batu. He had been selling fish for about 20 years. His sale include commonly-sold fish such as talakitok and tamban and rarer ones such as barracuda and pagi.

He only sells fish, with the local fishermen and the sama di laut catching the fish he usually sells using methods such as using the lambat and baklad, particularly for danggit.

According to him, times have changed as was evident in the rising prices of the fish. "Konting huli ngayon kaya mahal," he said, adding the many expenses for fishermen, including gasoline, to the factors that have contributed to the price increase.

He said that one of the challenges they're facing is the people themselves. "Maraming pumupunta from Bongao to Zamboanga." This usually happens on Mondays, Wednesdays, and Fridays, a particular time when "mahal ang isda na ginaatangan sa laot."

When asked about any existing dangers he and the fishermen might have encountered, he said that there had been no cases of dynamite fishing in the area. Not anymore, ever since the local authorities have started catching those who practice illegal methods.

Upon our return to the market, we did notice the presence of men in uniform. Amin said that every day, soldiers were posted around the area, along with police personnel and Marines on the weekend to help monitor the area for any illegal fishing practices.

He said that a Bantay Dagat organization was also put up, complete with a pump boat, and is wholly supported by their LGU to curb such illegal practices.

As the interview with Amin ended, Mr. Irilis spotted one of his acquaintances. He led Nasirin Taraji to the corner of the market where we were conducting our interviews.

Taraji has been the head of the Bantay Sanctuary under the Fish Project for about 15 years.

He shared that he has had his fair share of illegal fishers during his long years serving as the organization's head. It wasn't until 2006 that efforts to curb such practices were enforced, with the establishment of the Marine Protected Areas in 2006.

One of the main challenges of running an organization such as the Bantay Sanctuary is the people's behavior. "Wala [silang] pakialam sa marine resources," Taraji said. The organization addresses this issue by educating the community and promoting awareness of the value of Panglima Sugala's natural resources. According to him, there has been a decrease in the number of illegal fishing activities.

Panglima Sugala's LGU supports the various conservation efforts and provides an honorarium for the organization's members, according to Taraji. He added that they now have nine fish sanctuaries in Panglima Sugala, which, in turn, has caused an increase in fish production.

Taraji also shared with us some insights on how Panglima Sugala's Market Day started.

According to him, it was always a part of the culture in Jolo, Sulu and was brought back to Panglima Sugala when the 2nd mayor of the province wanted to emulate the market practices in Jolo.

Market Day in Panglima Sugala took place every Saturday only. But within the week a change of trades happened. Weekdays were reserved for farmers, Saturdays were for the fishermen.

To learn more about Panglima Sugala, its history, and its unique Market Day, we requested for a meeting with its LGU.

We were greeted by Madezan H. Badbaran, the project officer under the Municipal Planning and Development Coordinator2 office headed by Engr. Vicente Cabanes.

We got straight to the point and asked Mr. Badbaran about Panglima Sugala's Market Day. We wanted to know why there were no fixed prices on goods, why there were no weighing scales, and why everything was sold by bulto or by sets.

Maybe there were some historical or cultural clues that we've missed along the way. I was anticipating the answer to involve a long history of the place and the practice.

What I found was a very simple explanation -- it has always been a part of the community.

According to Badbaran, they don't have an actual date for when Panglima Sugala's Market Day or "Tabuh-Tabuh Day" was established. He cited that in 1972, there had already been a Market Day even before there was a market in Panglima Sugala.

People then were already practicing pagsambi, which is the barter of agricultural and marine products. During Martial Law, the practice of bartering was put on hold. It was restored only in 1995, during the time of Mayor Rejie Sahali.

Badbaran noticed a change in the market, referring to the increase in volume of both the products and the people who visited the market. Even the dayo from neighboring municipalities have started attending Market Day to exchange their agricultural products such as grated cassava, which would then be sent to Sulu. Marine products, including lapu-lapu and Yellowfin Tuna, from the market have even reportedly reached as far as Cebu and Manila.

Panglima Sugala, being a seaside community, is rich in marine products such as seaweeds, sea urchins, lobsters, agar-agar, and kagang, which is a type of mud crab. Where I live, crabs can get very expensive, usually going for hundreds of pesos per kilo.

In Panglima Sugala, however, it seems that you can have as many crabs as you want. Here, they sell them by tuhog or tumpok. The same thing goes for vegetables.

Badbaran thinks that Panglima Sugala is probably the only place where

people are practicing barter in its truest sense. But what if you don't have anything to trade with? Well, I was quite surprised to learn that you can do both: buy or barter. You need only to talk about the method of payment with the seller.

As of the 2015 census, Panglima Sugala had around 44, 184 residents. With this relatively large population come challenges for its Market Day.

In the past, there used to be no market venue and structure. Vendors placed their goods wherever it suited them. Fishing boats docked anywhere. Wherever they docked, that particular location would then be the "market."

There was also no fixed market schedule then. "Pagdating ng mga fisherman sa laot, walang schedule, so pagdating nila yun na yun," said Badbaran. Today, the market structure stands but space has become an issue. There's not enough area for the vendors to place their goods on, which would subsequently be exposed to the elements. Another issue faced by the LGU, vendors, and patrons was the small parking area, which caused some traffic during market days.

"[Sana] mas pa-igtingin ang pagbenta and [ma]preserve ang tradition [ng] barter," he said, adding that it would be beneficial if Panglima Sugala were promoted as an eco-tourism area, with several ongoing conservation efforts, and that he hopes that they will get support from funding

Mr. Roger Irilis is a training assistant at the MSU-TCTO. We are grateful to him for coordinating the meeting with the LGU and for assisting us during the interviews conducted at the market.

We are grateful to the MPDC for allowing us to conduct the interview.