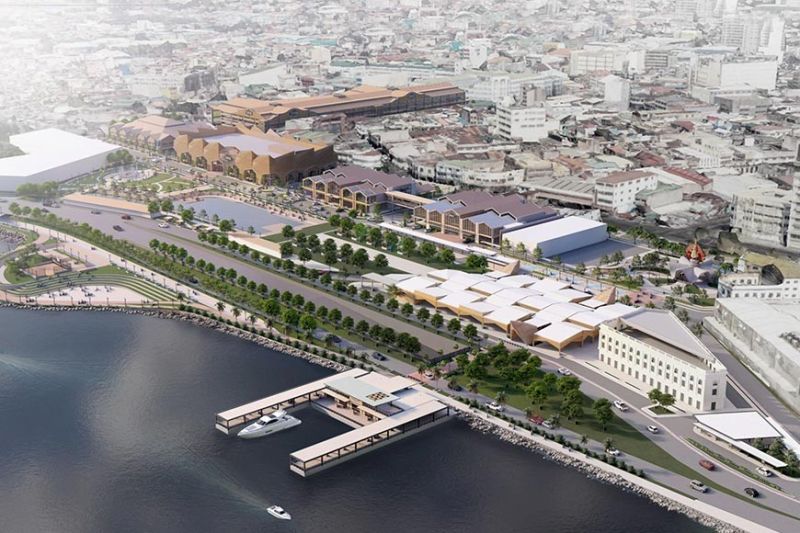 CEBU TO WORLD DEVELOPMENT. The seven-hectare property development, a venture between the Cebu City Government and Megawide Construction Corp. at no cost to the City, is a P5.5-billion, five-year project that begins in 2021. While Megawide will maintain the new development for at least 50 years, the Cebu City Government will retain ownership of the market and will continue to oversee its operations. 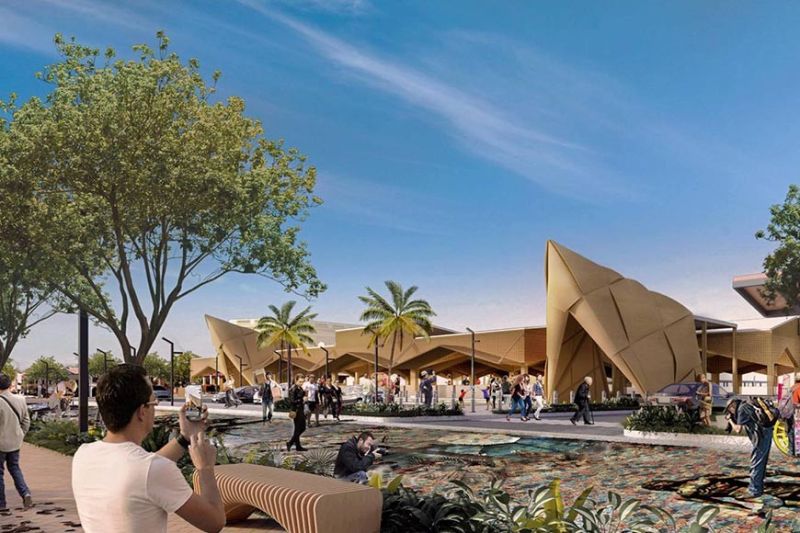 PUSO NIGHT MARKET. Designed like the puso (hanging rice), this night market is envisioned to open in the fourth quarter of 2021. 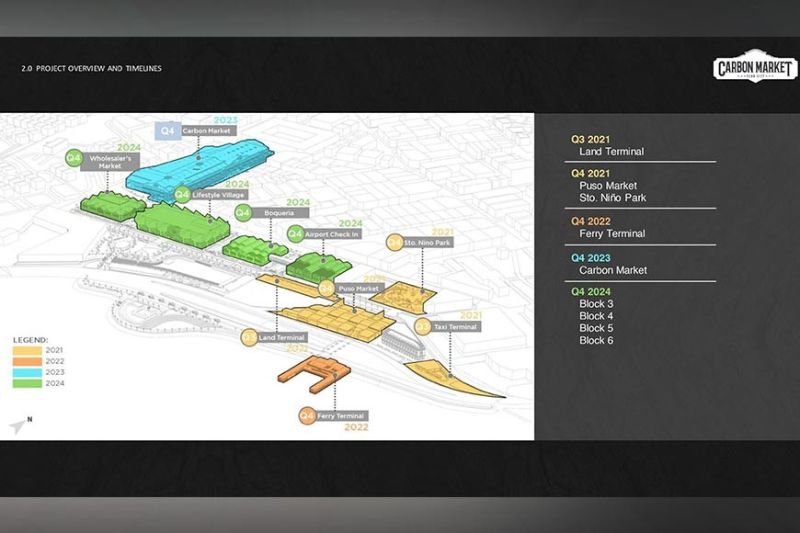 PHASE 1. The first phase of development covers six blocks: 1 and 2 will be the new Carbon Public Market, 3 the wholesaler market, 4 the lifestyle village, 5 the boqueria and 6 would be the airport in-city check-in facility and the 24/7 Puso market. 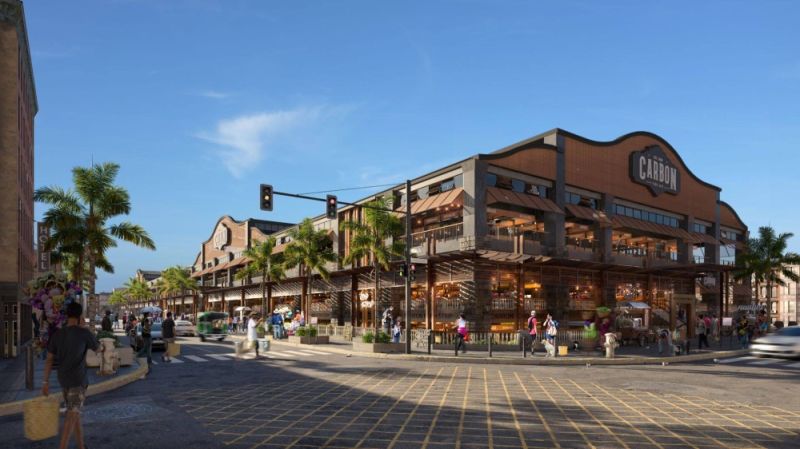 NEW CARBON MARKET. This is how the redeveloped Carbon Market will look once it is finished. It will be a two-floor structure and will accommodate 668 stalls. 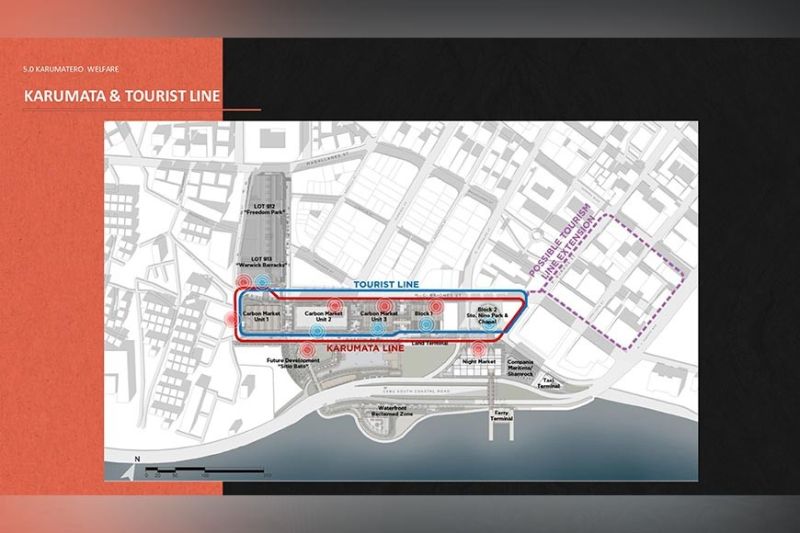 KARUMATA & TOURIST LINES. The karumateros may operate carts similar to mining carts to transport goods using the Karumata Line. A separate track that will take tourists on mining carts around the market will also be put in place. 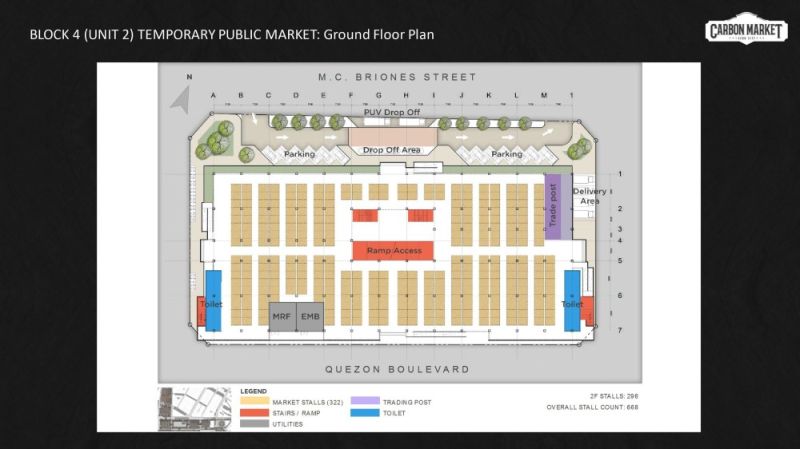 LAYOUT. The new Carbon Market will have two floors and a total of 668 stalls, the rent of which will be based on the Cebu City Market Code. / (Blueprints & perspectives provided by Megawide)

IN SEPTEMBER 2021, when Carbon Public Market vendors temporarily move to what is currently known as Unit 2, there should be minimal disruption in their business activities.

Rental and other market fees will remain the same, and the century-old Carbon Market will still be a public market even though Megawide Construction Corp. will take over its upkeep.

There is no truth to rumors that the rates will increase, said Megawide executive director for infrastructure development Manuel Louie Ferrer.

Any adjustment would need legislative action to amend the Cebu City Market Code, which governs the operations of the market. But for the next two years, the rates will be unchanged.

“Everything is (done) through the Market Code. We cannot just increase any amount because we are not authorized. Huwag silang matakot (They should not be apprehensive),” Ferrer told SunStar editors in a project briefing on February 4, 2021 at Radisson Blu in Cebu City.

Speculations that market operations are being privatized are also not true, Ferrer said.

While Megawide was awarded the contract to redevelop the seven-hectare property and maintain the new development for at least 50 years, the Cebu City Government will retain ownership of the market and will continue to oversee its operations.

The Cebu to World Development, Megawide’s joint venture company with the Cebu City Government, targets to hold groundbreaking ceremonies for the Carbon Market redevelopment project either in late February or early March.

The project, estimated to cost P5.5 billion for the first phase, will transform the Carbon Market into a world-class facility and address the perennial problems of overcrowding, poor sanitation and petty crime incidents.

There will be six blocks in the first phase of development. Blocks 1 and 2 will be the new Carbon Public Market, Block 3 the wholesalers’ market, Block 4 the lifestyle village, Block 5 the boqueria and Block 6 would be the airport in-city check-in facility and the 24/7 Puso market.

Renovation of the Unit 2 building will begin the second quarter of 2021.

This will serve as temporary home of the vendors while a new public market building is being constructed.

Jason Torres, Megawide assistant vice president and corporate affairs head, said discussions with the vendors will be held beginning February to prepare for their relocation to the temporary facility.

By July, Torres said they will have completed allocation of stalls at the temporary facility.

Aside from the 300 to 350 Freedom and Warwick vendors, ambulant vendors may also be accommodated at the interim facility.

The renovation is targeted to be completed in September 2021 and the stalls turned over to the vendors in the same month. Operations are targeted to start in October 2021.

But once the project is completed, Ferrer said all vendors would have to transfer inside the new market.

To provide options to Carbon residents and address the manpower requirements of the project at the same time, Torres said Megawide is undertaking a construction skills training program for free.

The beneficiaries will be trained on masonry, tile-setting, rebar and scaffolding.

Torres said those who complete the training may be employed during the construction phase of the redevelopment project.

The company will also provide training on basket weaving and basic entrepreneurial skills.

The beneficiaries of this mega-kabuhayan program will be provided with starter kits and post-training support.

To help the karumateros, or those who earn a living with the use of their rickety wooden pushcarts, Ferrer said they will be installing train tracks around Blocks 3 to 6.

Instead of their pushcarts, the karumateros may operate carts similar to mining carts to transport goods using the Karumata Line. Megawide will provide the carts.

A separate track that will take tourists on mining carts around the market will also be put in place.

“They can continue their pushcart business but this (taking tourists around) would be another source of income for the karumateros,” Ferrer said.

Under its redevelopment plan, Megawide targets to complete a transport terminal for all modes of land transportation in the third quarter of 2021.

This will be situated near the 24/7 Puso Market, so-called because its entrances are designed like the iconic puso, or hanging rice.

Puso Market is envisioned to open in the fourth quarter of 2021, along with the Sto. Niño Park, which will feature a chapel with a giant image of the Señor Sto. Niño facing the sea.

As soon as the vendors transfer to the renovated Unit 2 building by October 2021, work on the new Carbon Market building will begin.

The new building, which was designed based on the old train station in Carcar, will rise on the site of Freedom Park and Warwick Barracks, designated by Megawide as Block 1 and 2.

Construction is targeted to be completed in two years, or in the first quarter of 2023.

Unit 2, on the other hand, will become Block 4 and will be transformed into a three-level mall that will serve as the lifestyle village.

Block 5 will be the boqueria, named after the La Boqueria in Barcelona, Spain, a huge public market that is also a tourist landmark.

At Carbon, the boqueria will serve as an incubator for pop-up shops with diverse products.

A ferry terminal for water taxis that will initially serve the route between Carbon and the Mactan-Cebu International Airport will be constructed near Block 6. This is seen to start operations in the fourth quarter of 2022.

The landside facilities of the airport are also being operated and maintained by Megawide, together with its partner GMR Infrastructure from India.

Block 6 will host the duty-free shop and the airport check-in facility, which will be the first of its kind in the country.

Travelers may check in their luggage at the facility and go around Carbon while waiting to connect to the airport.

Aside from undertaking the redevelopment of Carbon at no cost to the government, Megawide will also remit to the Cebu City Government a fixed guaranteed payment of P50 million a year beginning in the fifth year of operations.

In the first four years, while the property is being redeveloped by phases, Ferrer said the amount will be based on a certain percentage of the revenues that will be collected.

The amount will gradually increase until it reaches P50 million on the fifth year.

For 2021, Ferrer said they expect to start generating revenues from the Puso Market, which is targeted to open in the fourth quarter.

The remittance to the City Government will be equivalent to a percentage of the revenues that will be collected from the Puso Market.

“We will collect because the business is through leasing, and then a share of that revenue will be given to the government,” he said.

The terms for the redevelopment contract is a win-win situation for the Cebu City Government and the stakeholders, Ferrer said.

“We (Megawide) are taking all the risks. We just hope that this project will not be hindered by politics,” he said.