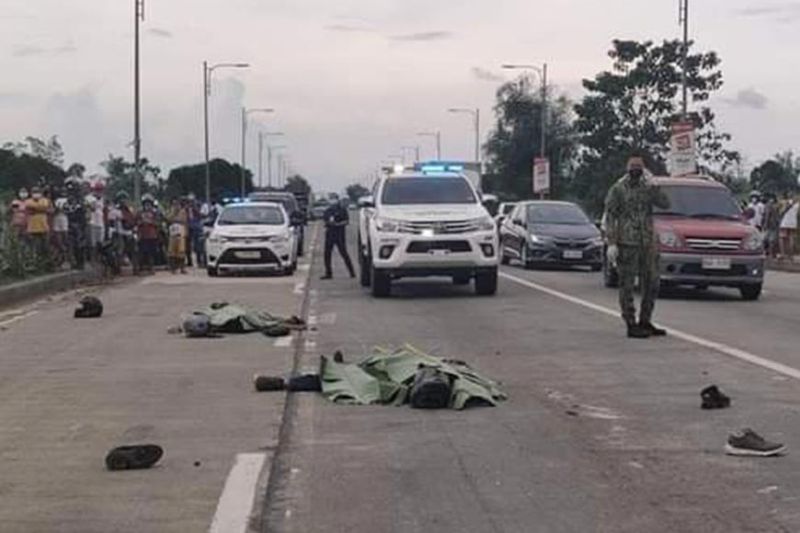 FATAL ACCIDENT. Allan Bedonia, 55, and his nephew, Rodrigo, 23, both from Barangay Dos Hermanas in Talisay City, died as the motorcycle they were riding was sideswiped by a trailer truck driven by Jose Kenneth Verbo, 42 of Barangay Tinampa-an in Cadiz City, along Bacolod-Silay Airport Access Road in Talisay City Saturday afternoon. February 13, 2021. The victims, who reportedly came from baptism rites, were thrown away and died on the spot due to the strong impact. The truck driver, who is now detained at the police station, will be charged for Reckless Imprudence Resulting in Multiple Homicide and damage to property. (Talisay CDRRMO photo)

A MOTORCYCLE-RIDING man and his nephew died after they were sideswiped by a trailer truck at Hacienda Busay, Barangay Efegenio, Talisay City, Negros Occidental on Saturday, February 13, 2021.

The victims were identified by police as Allan Bedonia, 55, and his nephew Rodrigo Bedonia, 22, both residents of Barangay Dos Hermanas.

The two were on their way home from a christening in the neighboring city of Silay when they were hit by the rear part of the truck driven by Jose Kenneth Verbo, 42, of Barangay Tinampa-an, Cadiz City.

Master Sergeant Michael Mcdowell, chief investigator of Talisay City Police Station, said actual footage of the accident captured by a dashboard camera was posted by a netizen that showed an alleged speeding truck hitting the motorcycle at the inner lane.

Based on the investigation, the truck and the motorcycle were traveling in the same direction when the truck overtook and miscalculated its movement.

Mcdowell said the victims were thrown off their motorcycle, causing them serious injuries despite wearing helmets.

Allan sustained head injuries while Rodrigo might have been run over by the truck, Mcdowell said.

They were both rushed to a hospital but were pronounced dead by an attending physician, he added.

Mcdowell said they are waiting for the decision of the victims’ families on the filing of charges against Verbo, who is detained at the police station.