Songs in Anthony Castelo's heart, if you open it now 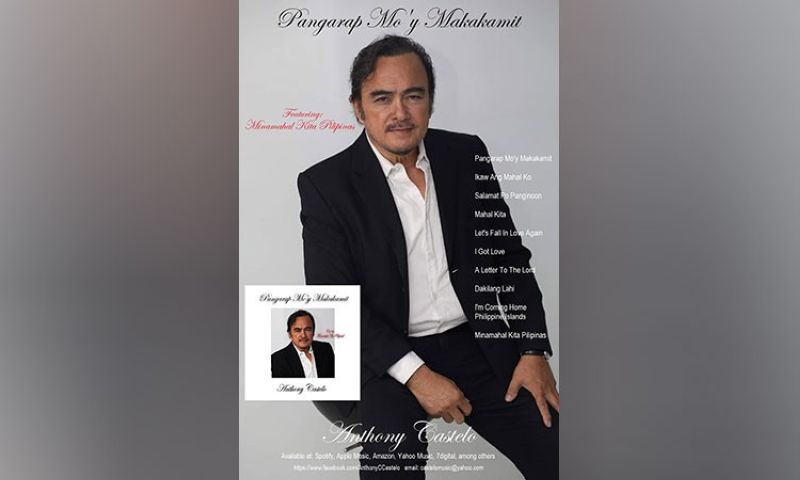 "IF YOU open my heart now, these are some of the songs you will hear," says hit maker Anthony Castelo in a recent interview prior to the launch of his new album on February 16 at RJ Bravo Lounge at Dusit Hotel in Makati.

Known for his timeless love songs, the veteran singer says he's happy he's stepping out of the box, for a change, in a small, humble way, after a long, long while.

Musically, it's not a radical shift as the strains of the old love-song- and-ballad formula echo with an equal dose of passion and compassion, rhyme and reason, yet the sound that reverberates proudly from the veteran singer's new album speaks so much more of his desire to grow furthermore as an artist changing, growing with the times.

There are strong touches of jazz and Latin beats that lend both soul, spunk and character to some of the cuts, and this is probably where Anthony is happiest about.

"In my time, when I would be working with a producer, I'd be given a set of songs to record, and that was it. It feels good to have some kind of artistic control in my material now," he says.

The old set-up, Castelo says, has cast him in a stereotype -- romantic ballads -- which he doesn't resent anyway.

"My music has been very good to me all these years," he acknowledges.

Recall hit songs like "Balatkayo," "Nang Dahil sa Pag-ibig," "Hahanapin Ko," "Kaibigan," and many other love songs that elevated Anthony to the enviable status of a music superstar in the 70s and 80s.

Castelo has just released a new album, Pangarap Moý Makakamit (co-written with Sen. Tito Sotto), featuring "Minamahal Kita, Pilipinas," a collection of inspiring, scintillating songs that speak of love in a broader, uplifting sense. Celebrated through the 10 songs in the album rendered in that signature baritone of his are love of self, love of others, love of God, love of country.

The songs were produced and recorded within a span of several years, some dating back to the time the singer was still based in Los Angeles, California. They had been rearranged and re-recorded in collaboration with Mitch Morala, former musical director of the famed 70s all-Fil-Am group, Society of Seven.

Recording was done at the Morala Studios in Los Angeles, California, and in Bohol, Philippines. Note that Morala's more contemporary arrangement, enriched further by western influences, has given the album international quality and flair.

Background vocals are by Lyric Williams and Mari Nallos.