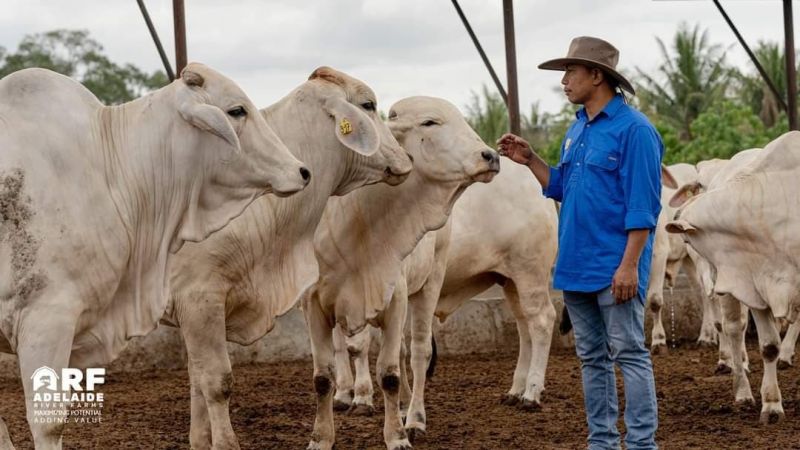 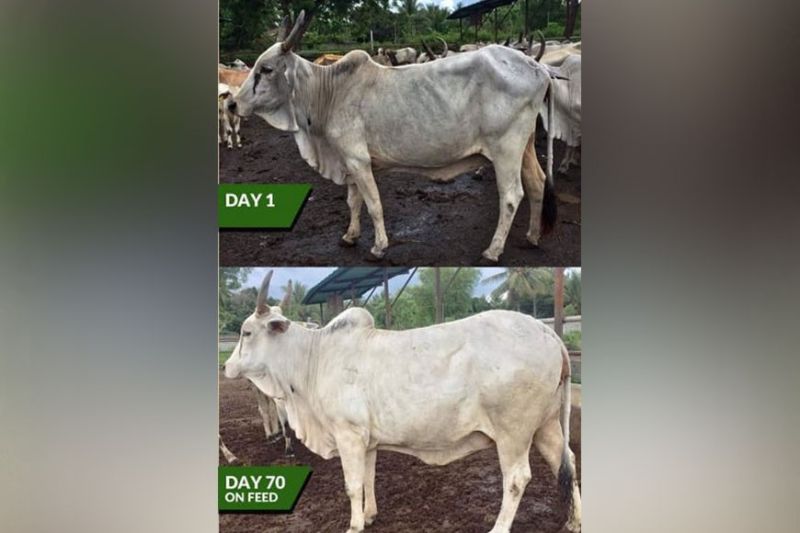 BIGGER PROFIT. In just 70 days of proper care and feeding, an emaciated cow can gain as much as 100 more kilos. (ARF photo)

SMALL farmers with a cow or a small herd of cattle can get as much as 100 more kilos from just one cow for as long as they know how to feed their ruminants between 70 to 100 days before selling, a cattle farm owner and former overseas Filipino worker in Polomolok, South Cotabato said.

Arnel T. Corpuz co-owns Adelaide River Farms in Polomolok with Paul Richard Alcoreza. The farm is focused on cattle feeding and fattening while breeding a few.

"We buy the cheapest and thinnest cattle available and turn them into muscled finished cattle. It's a shame to see cattle being slaughtered without reaching their maximum potential," he said, adding that it only takes 100 days to get an extra 100 kilos of beef from just one cow.

This is where his advocacy lies. To teach the farmers the right way so that they get the maximum benefit from their cattle.

"Cattle feeding is an exact science, we are not feeding the cattle but the microbes inside the rumen (the cow's first stomach). These microbes are very sensitive to change of Ph (acidity level)," he said.

Thus, to be successful in the feeding business, there are protocols to be followed during the fattening period.

Number 1: Feeding must be done at the same time and place every day. A farmer can lose as much as 60 percent of his cattle if he does not follow this.

Number 2 is Inventory Management and Transition.

"Farmers should be taught how to preserve silage for consistent feed quality and quantity," he said. But should changing feed ingredients becomes necessary, farmers should know how to transition from the original mix to the new.

Cattle need 22 hours of feeding daily and 24 hours of freshwater supply for efficient performance. Farmers must attend to this. The pens have to be cleaned and water changed every three days. The cattle also need to have some exercise for the first two weeks. That's how you can get 100 kilos more meat per cow.

While a profitable business model for cattle feeding needs at least 20 heads of cattle, a small farmer still can earn a lot from a single cow if he follows the procedures.

"As a matter of fact, we encourage every farmer to feed their cattle 70 to 100 days prior to slaughter. Maski one head lang pwede mag-cattle feeding," he said.

They deal mostly with Brahman since these are the most common cattle breed in the Soccsksargen area.

"I used to manage one of the biggest Wagyu Feedlot in the world feeding 25,000 heads at any given time so when I went home, we started breeding Wagyu. Still at very small number due to limited stock. Our main business is still value-adding," he said.

Mindanao-raised Wagyu beef, he said, is just as premium-grade as the imported ones although they are only targeting a score of 5 in terms of marbling. Marbling is that mix of fat and meat in the beef and Wagyu cattle, famed for its melt-in-your-mouth texture, are genetically predisposed to have higher marbling levels than any other breed of cattle.

The highest score for marbling of top Australian and Japanese Wagyu is 12, he said, "But luod na man pud ang score 8 pataas (marbling that's scored 8 and up is too rich for the palate)."

Wagyu marbling potential, he said, is 50 percent genetics and 50 percent feeding technique. But the primary advantage of Mindanao-raised Wagyu is the cheaper cost of production as compared to Japan and Australia.

Their focus now, aside from making sure that their farm operations continue to be profitable, is to make cattle value-adding a byword among small farmers here. It's their advocacy. He does tutorials on their YouTube channel, Adelaide River.

Dire circumstances forced Corpuz to take whatever job is available during his younger years. But beyond just working, he was learning as much as he can and is now teaching what he has learned to small farmers for them to earn more.

Corpuz, chief operating officer of Adelaide River Farms, takes pride in having worked in the cattle business for 27 years here and abroad.

Starting as a janitor at Dealco Farms in Glamang, Polomolok in 1994, he worked his way up and became general manager in 2001.

"College dropout, no experience on agri prior to joining Dealco," he said.

Dealco Farms was into live cattle trade from Australia. But it was hit hard by the Asian Financial Crisis in 2004, it closed shop.

"Luckily I met a family that owns a cattle feedlot in Australia back in 2001 when I went for a short course at University of New England in Australia," he said.

While working abroad, he always looked forward to the day when he can come home for good. This desire grew when during one of his vacations in the Philippines he saw how small farmers suffered from a major drought and their livestock decimated.

"I believe my skills and technique in cattle value-adding would help. I believe na pwede madatu mga Filipino farmers basta (The Filipino farmers can become rich for as long as) they will learn the right technique and attitude," he told SunStar Davao.

He went home for good in December 2015 after he met erstwhile Mayor Rodrigo R. Duterte and was fired up by the high hopes of OFWs on their new leader.