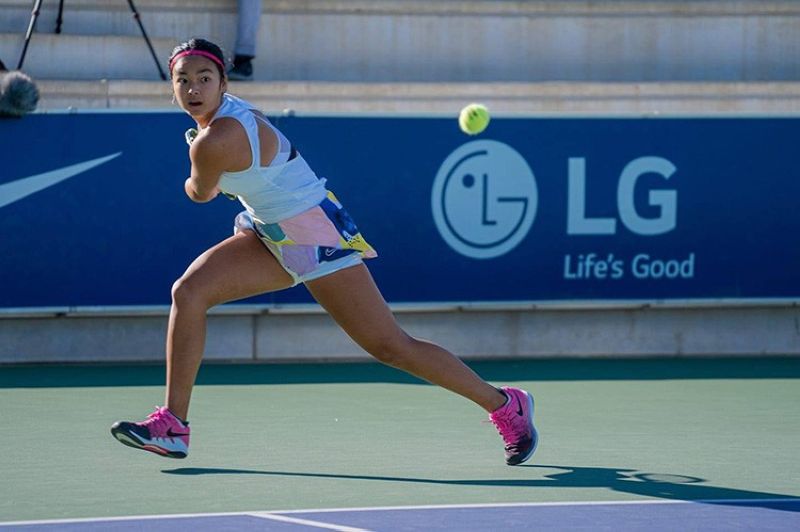 Filipina tennis sensation Alex Eala disclosed that she would be focusing more on the women’s pro tour this year. (Alex Eala Facebook page)

Filipina tennis ace Alex Eala will be focusing on the women’s professional tennis tour this year as she pursuits bigger goals for this year.

Just 15-years of age, the highly-skilled left-handed powerhouse has already broken through the top-1000 of the Women’s Tennis Association (WTA) with her singles ranking of no. 903. She is also the 1682nd-ranked player in the International Tennis Federation (ITF) singles ladder.

“This year, I’m definitely going to prioritize my goals over the women’s tour over the juniors because that will help me more in the future,” the tennis phenom said in a conversation with her uncle and former PBA commissioner Noli Eala on the program “Power & Play” last weekend.

"The more I play in the women’s, the more I get to notice it and the more I learn about the women’s tour, so now I’m just trying to transition slowly my game to the one that will support me in the future," added Eala, who is the third-ranked juniors tennis player in the entire world.

Eala said that she never thought she would come away with the championship when she joined the first leg of the W15 Manacor last month, explaining that she only wanted to get a feel of the women’s pro tour. Ranged against players older and more experienced than her, the youngster said she felt intimidated at times but the nervousness all went away when the match got underway.

“Most of them, actually I don't know. I'm quite new to the women's tour. But I know they are more experienced than I am. I can be intimidated sometimes but when you're on court, it really shouldn't matter," Eala said.

After winning the first leg of the W15 Manacor, Eala went on to make consecutive trips to the quarterfinal round in both the second and third legs of the very same competition. Although she was beaten both times, she used the experience from the two tournaments to make even more waves in her first $25,000 competition — the W25 Trophee de la Ville de Grenoble in Grenoble, France.

After getting past Laura-Ioana Paar of Romania in the first round, Eala’s grit was tested against Spanish foe Cristina Bucsa, the tournament’s seventh seed, who she faced in the second round. After losing the first set, 2-6, Eala rallied and took the next two, 6-3, 7-6, to make her way to the quarterfinals where she was eventually beaten by Maja Chwalinska of Poland, 0-6, 4-6.

“Being the underdog was an advantage,” said Eala. “I didn’t feel any extra pressure. I don’t think any unnecessary pressure would help me perform better.”

Eala’s pro journey may have gotten off to a great start but she says she is not resting on her laurels.

“I think I’m going at a good speed. I’m really proud of myself for breaking the top 1,000 and I have bigger goals. I have goals that I hope to reach by the end of this year," said Eala. (JNP)