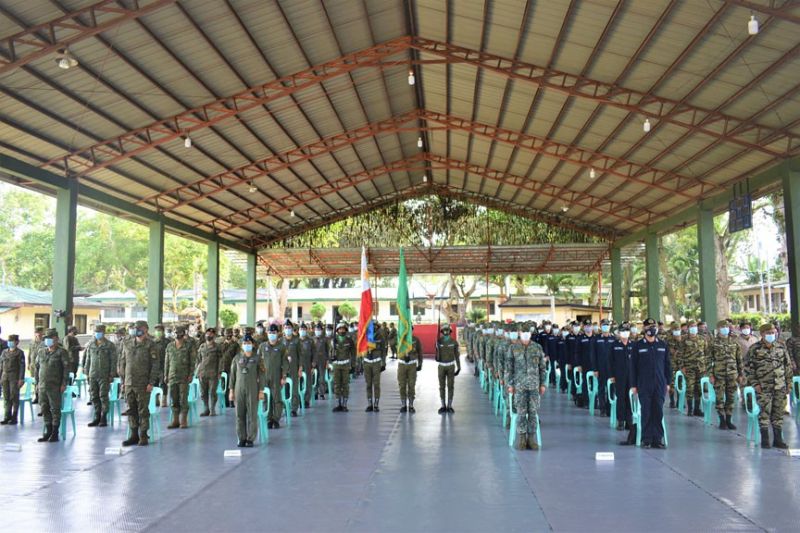 ZAMBOANGA. The Joint Task Force Sulu is conducting a Joint Training Exercise to enhance the interoperability of its troops in combating terrorism. A photo handout shows the troops in formation during the start of the training Saturday, February 13. The training ends Friday, February 19. (SunStar Zamboanga)

THE Joint Task Force (JTF)-Sulu is conducting a week-long Joint Training Exercise (JTX) to enhance interoperability and strengthen camaraderie of its troops as they fight against terrorism in Sulu.

The training, dubbed as "JTX Lupasug 01-2021," involves the participation of Army, Navy and Air Force troops under the JTF-Sulu. It kicked off Saturday, February 13, and will end on Friday, February 19.

Major General William Gonzales, JTF-Sulu commander, said the training was conceptualized even before the successful interdiction operation -- Perfect Storm 2 -- that led to the neutralization of key Abu Sayyaf Group members on November 3, 2020.

Seven Abu Sayyaf bandits were killed on the November 3, 2020 when Army's Special Forces troops aboard a helicopter gunship and a multi-purpose attack craft (MPAC) intercepted a twin-engine speed boat of the ASG near Sulare Island, Parang, Sulu.

The slain Abu Sayyaf bandits were set to stage kidnapping anew when the clash ensued, as the troops intercepted them at sea.

"Our brave men and women who steered the Perfect Storm operation were able to bring down the terrorists and prevented them from conducting kidnapping activities and other atrocities in northern Mindanao," said Gonzales, who is proud of the command's notable achievements.

He said the notable accomplishments demonstrate how the collaboration among stakeholders is significantly weakening the Abu Sayyaf bandits.

He said through the Joint Training Exercise, the troops can focus on how they can further synchronize their capabilities.

"While we recognize our cultural and organizational diversities, we should work as one strong JTF-Sulu. Through this exercise I expect that we will be able to close the land-air-sea gaps, develop solid camaraderie, and together, defeat the scourge of terrorism and usher in