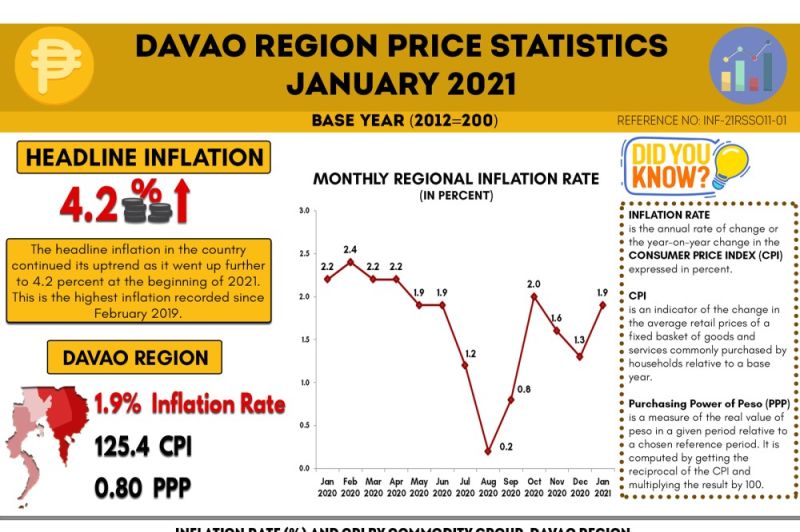 The agency said the January 2021 inflation rate is relatively lower "than the same month of the previous year (2020) at 2.2 percent."

"The rising trend of inflation in January 2021 was partly affected by the higher annual increment in the index of Food and Non-Alcoholic Beverages from 0.3 percent in December 2020 to 1.5 percent in January 2021," PSA-Davao said in a statement.

Among the selected food items, meat recorded the highest inflation at 11.5 percent from 6.4 percent in December 2020.

Earlier, Hog Farmers Association of Davao Inc. (Hogfadi) president Eduardo So said the price of pork has been increasing because of low supply amid high demand. The drop in pork supply is due to the African Swine Fever (ASF).

So said the pork supply in Mindanao is already down by around 30 to 40 percent because of the ASF outbreak.

PSA-Davao also recorded an uptick in the inflation of vegetables and fruits.

Other commodity groups that accelerated the inflation in January are Restaurant and Miscellaneous Goods and Services, at 2.2 percent from 1.6 percent; Health, at 2.3 percent from 2.0 percent; and Housing, Water, Electricity, Gas, and Other Fuels, at 2.4 percent from 2.1 percent.