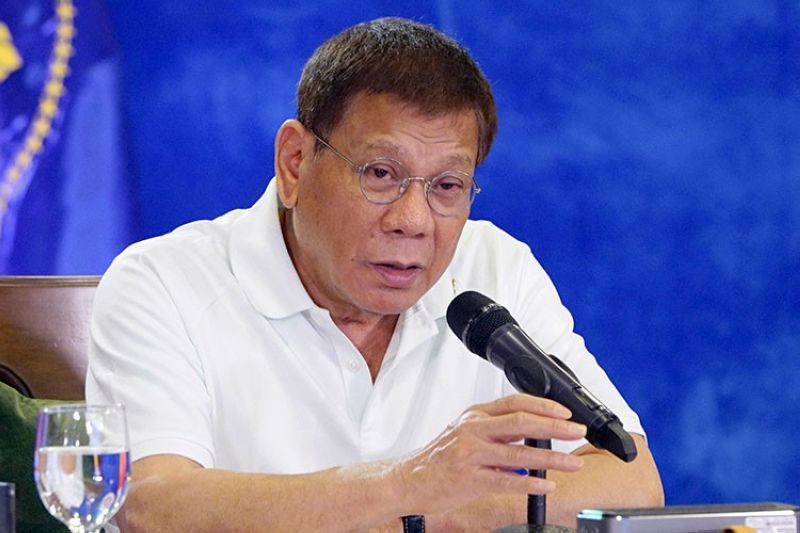 DAVAO. In this February 15, 2021, photo provided by the Malacanang Presidential Photographers Division, Rresident Rodrigo Duterte gestures as he meets members of the Inter-Agency Task Force on the Emerging Infectious Diseases in Davao City. (AP)

PRESIDENT Rodrigo Duterte has approved an amnesty program for Muslim and communist rebels who would agree to surrender their weapons as they return to normal life in the latest such attempt to tame rural insurgencies that have raged for half a century.

Thousands of guerrillas belonging to two large Muslim groups in the country's south and a communist rebel faction could apply for the amnesty within a year after it gets approved by Congress, according to Duterte's signed orders made public late Tuesday, February 16.

He said that his rebel group's peace deal with the government provides for a general amnesty with an agreed manner of "decommissioning," a subtle term for disarming thousands of its combatants in batches depending largely on government compliance with the peace pact.

Duterte also agreed to include former insurgents who once belonged to the main communist New People's Army in his amnesty program. He labeled the NPA a "terrorist group" in his amnesty proclamation. His administration's peace talks with the Marxist group collapsed after both sides accused each other of launching attacks despite peace negotiations brokered by Norway.

The 75-year-old Duterte has promised to resolve Muslim and communist insurgencies before he leaves office. His six-year term ends in June next year.

"There is a need to reintegrate as soon as possible all rebels and insurgents into the mainstream society under the rule of law, including those who may have committed unlawful acts," Duterte said in his amnesty proclamation.

The amnesty "shall extinguish any criminal liability for acts committed in pursuit of political beliefs" and restore political and civil rights, which were lost due to criminal conviction, the proclamation said.

The amnesty would not cover kidnappings for ransom, massacres, rape, terrorism, drug trafficking and certain crimes the UN says should never be covered by amnesties, such as genocide, crimes against humanity and torture.

The amnesty program excludes the notoriously brutal Abu Sayyaf and other small armed bands associated with the Islamic State group.

The Abu Sayyaf has been blacklisted by the United States and the Philippines as a terrorist organization for kidnappings for ransom, beheadings and suicide bombings. It has been weakened by years of battle setbacks, surrenders and continuing military offensives but remains a security threat. (AP)