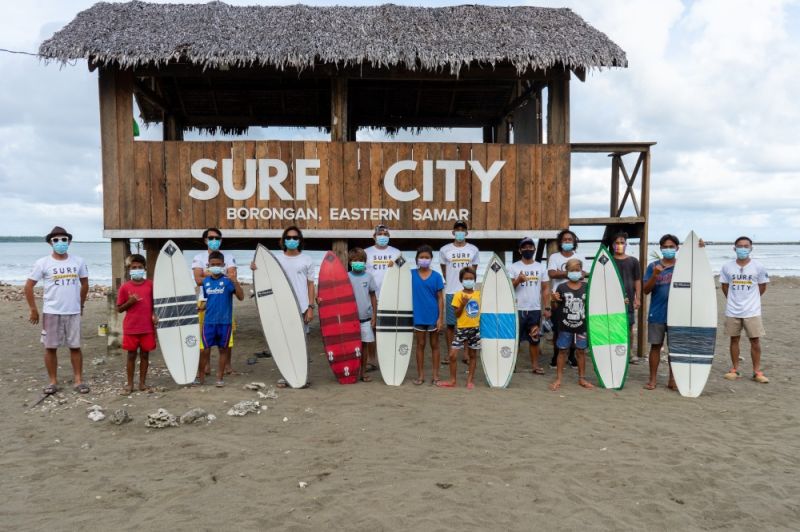 BORONGAN. Surfriders club Board of Directors and Officers with the new generation of surfer. (Contributed photo) 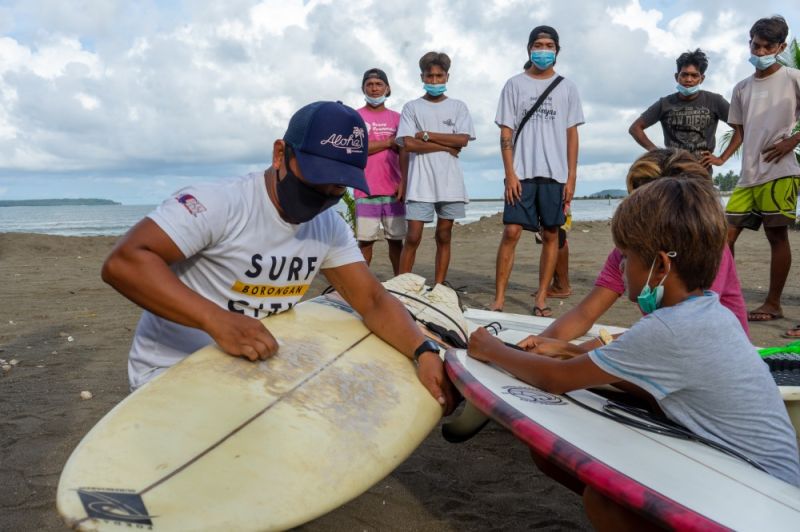 BORONGAN. Local Surf Champ Totoy Rosel teaching the kids how to take care of the board. (Contributed photo) 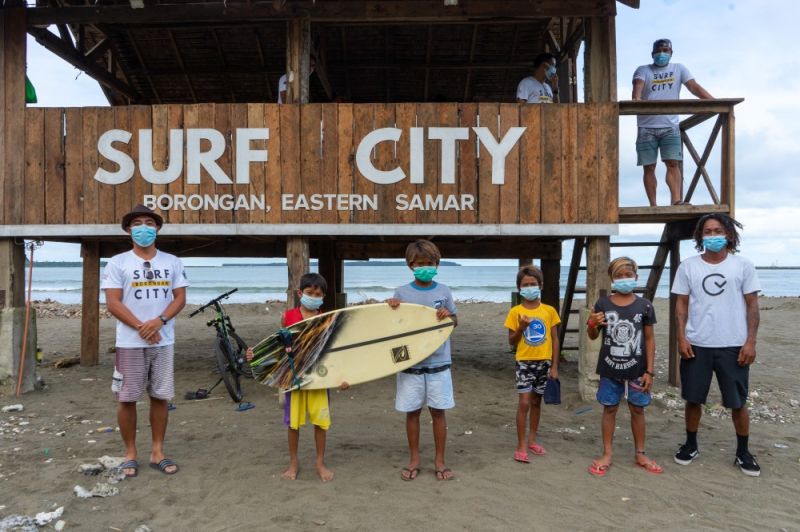 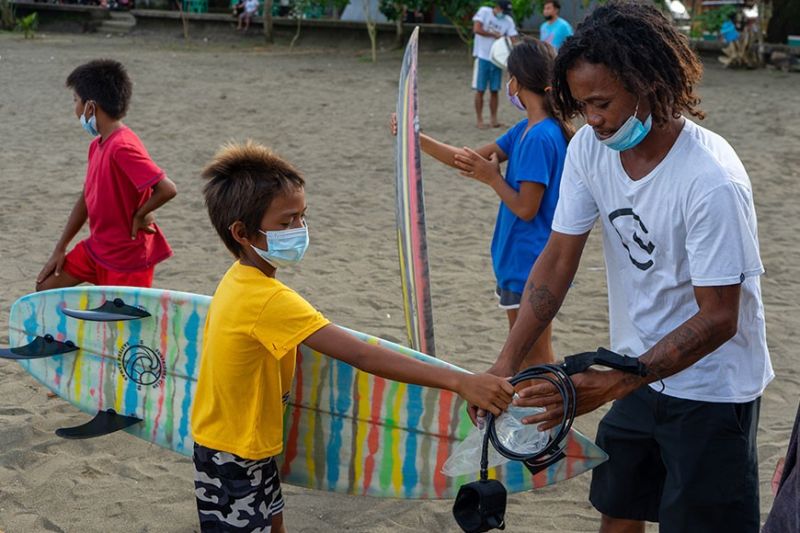 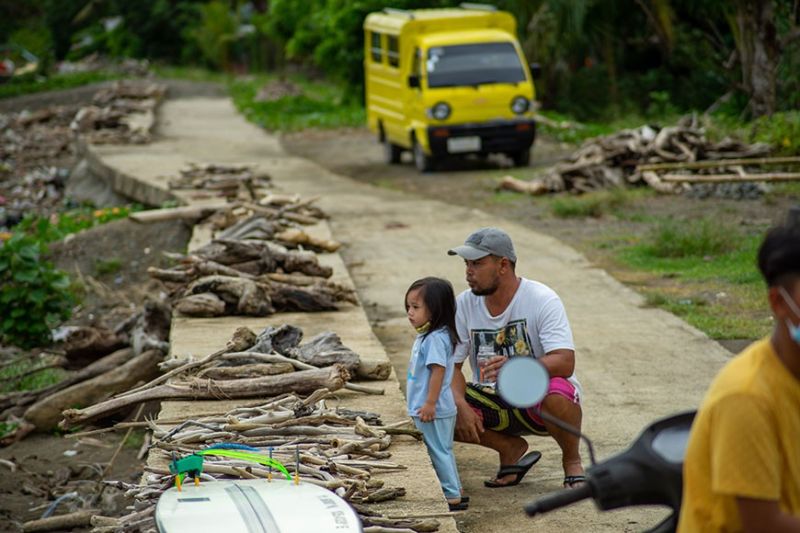 BORONGAN CITY, Eastern Samar -- Valentine's Day is indeed a celebration of all forms of love.

Six brand new surfboards and accessories were given to groms, who were chosen based on their potential to enhance their skills, as well as their perseverance in life.

But there's a catch. The recipients have to follow four conditions for using the equipment. The conditions were:

(1) Staying in school and studying well;

(2) Helping their elders in the household;

(3) Being productive and law abiding members of their community; and

"We set these conditions to emphasize to these kids that education and good values are important to the surfing community. We want to train not just skilled groms, but also law-abiding surfers that care for their community," SCES president Rupert Ambil said.

Surf champs and "Kuya's" of the club also agreed to mentor the next generation of surfers by overseeing the use of equipment for the young athletes. The club thanked the members and friends of the organization who pooled resources to acquire the needed equipment to realize this mentorship program.

As they received new equipment, the young surfers passed their junior boards to the next generation of surfers.

One recipient of a new surfboard turned over his old board to a new grom. Because boards were made for them at a young age, they outgrow the size of the equipment as they get older. While this particular surfboard was handed to its third owner, it is still in good condition.

This board was one of the very first boards donated by surfboard shaper Brandale Balid.

Shaper Brandale Balid has been sponsoring members of the surf club since he learned how to make boards. Almost all of the boards used in the Surf City Festival were shaped at his shop, and sponsored by him.

"Whenever I see my boards being used by surfers and getting stoked on what I made, I feel as if I am the one using it," Brandale said.

This is not the first time the surf organization held outreach programs like this. When the lockdown began in March 2020, they were the first to produce face shields in the whole province of Eastern Samar. What started out as a small project with a target to create 100 pieces of personal protective equipment (PPE), eventually reached 1000 pieces.

These PPEs were distributed to medical health workers and uniformed personnel who are at the frontlines of the battle against Covid-19.

Because of this, the City Government of Borongan recognized the Surf Riders Club of Eastern Samar as "local heroes" on June 30, 2020.

After the success of the first ever Surf in the City Festival in December 2019, partners from different surfer groups around the Philippines contributed to support local surfers in Eastern Samar economically affected by Covid-19.

UPSA, through Luke Landrigan of PSCT, facilitated the fund to support local surfers of Eastern Samar. Ambil activated the club's quick response team and provided a counterpart fund for this project.

Surf in the City

Surfriders Club of Eastern Samar is the oldest surf club in Eastern Samar. In 2019, they co-organized the Surf in the City Festival with the City Government of Borongan. The event gathered almost 100 best surfers in the country.

Surf in the City served as the final leg of the Philippine Surfing Championship Tour (PSCT) where they recognized the top surfers in the country including the surfers who represented the country in the 2019 Southeast Asian Games.

The event boosted tourism opportunities for Borongan City with the five-day festival also hosting various sporting competitions aside from surfing, evening concerts featuring local bands and talents, and product exposition of some of the best products from the province.

The festival was also amplified online through the daily livestreaming of the event and rigorous social media promotions. This caught the attention of thousands of avid surfing enthusiasts from the Philippines and abroad. With this, the Surfriders Club of Eastern Samar are definitely putting Borongan City on the map as a surf city. (PR)