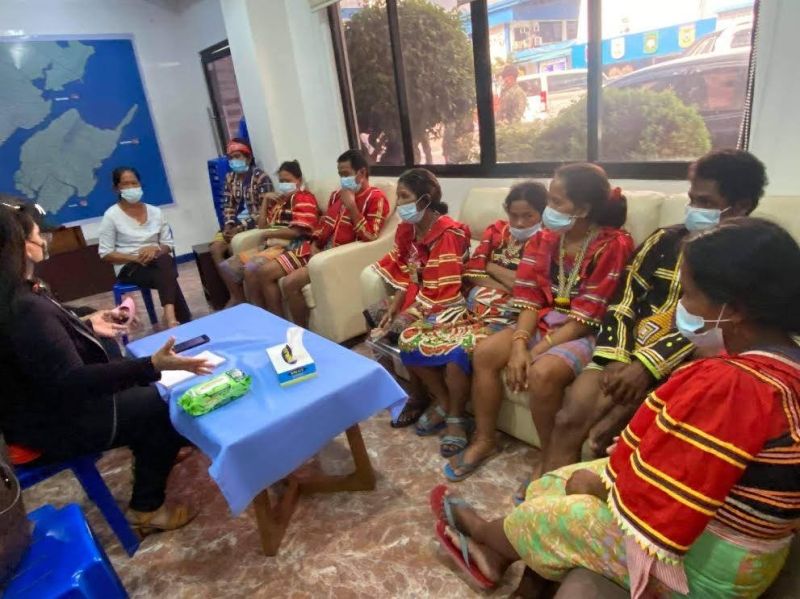 CEBU. Investigators from the Commission on Human Rights Central Visayas (CHR 7) meet with the parents of some of the Lumad children who attended the Bakwit School in the University of San Carlos Talamban campus. / BENJIE TALISIC

Lumad is a Visayan term referring to indigenous peoples (IP). The seven were among 26 persons rounded up in what the police claimed was a “rescue operation” at a retreat house inside the University of San Carlos (USC) Talamban campus on Feb. 15.

Except for Porcadilla, the accused are being detained at the PRO 7 while the minors are now under the custody of the Department of Social Welfare and Development (DSWD), except those whose parents and guardians came to fetch them.

Lawyer King Anthony Perez, spokesperson of the National Union for People’s Lawyers (NUPL) Cebu who is representing the seven accused, said Porcadilla is being held at the Cebu City Police Office detention facility for women.

Perez said they were set to request for a preliminary investigation.

He said Prosecutor Grazeilynne Copuz, who conducted the inquest, had promised to provide copies of the complaints once the NUPL files its manifestation.

“So far, our assessment is that we have strong evidence against them. The parents, together with social workers in both Cebu City and Davao del Norte, were certain that laws were violated,” Montejo said.

He said the police will also look into possible charges that may be filed against the USC administration.

Montejo also said the PRO 7 intelligence unit will verify allegations that two of the accused who are allied with a left-leaning organization had a photo taken together with Jose Maria Sison, the founding chairman of the Communist Party of the Philippines (CPP) and its armed unit New People’s Army.

He said they will coordinate with other intelligence communities to determine their role in the communist insurgency.

Also on Wednesday, a team from the Commission on Human Rights Central Visayas (CHR 7) led by Maria Voy Belen began their motu proprio investigation into the incident by taking the testimony of the six Lumad parents who had sought government help in bringing their children home to Talaingod, Davao del Norte.

Among those who gave his testimony is Enanggom Mandacan, a resident of Sitio Kamingaw, Barangay Palma Gil in Talaingod. Mandacan and the other parents said they didn’t consent to their children’s prolonged stay in Cebu.

Lawyer Arvin Odron, CHR 7 director, said they immediately dispatched a quick reaction team moments after learning of the “rescue operation” by the police.

The team, composed of special investigators, verified the incident and talked with the minors, their adult companions, the police and potential witnesses.

He said their investigation would determine whether rights were violated or put at risk of being violated to prevent recurrence.

“As we deal here with children whose rights are prone or vulnerable to abuse, we want to ensure that all stakeholders act ‘for the best interest’ of our children,” Odron said.

As this developed, the Commission on Social Advocacies (COSA) of the Archdiocese of Cebu condemned the police operation.

In a statement, the commission said the presence of the Lumads in Cebu is based on a 2019 agreement allowing them to continue studying in a Bakwit School in Cebu in light of the militarization of their ancestral lands and the closure of their schools in Mindanao.

“The Bakwit School is a celebration of dialogue and an act of solidarity to our Lumad brothers and sisters whose communities were bombed and militarized,” Cosa said in its statement. Bakwit is a Visayan term for evacuation or an evacuee.

The commission said the arrival of the Lumads in Cebu was well documented on social media before the Covid-19 pandemic.

The Department of Education (DepEd) ordered the shutdown of 55 Lumad schools in Davao region in July 2019.

They were stranded in Cebu, however, because of the lockdown due to the pandemic.

The commission also called on the authorities to immediately release the 26 Lumad students and elders, and the teachers. (WBS / BBT / AYB)
< Previous PageNext Page >