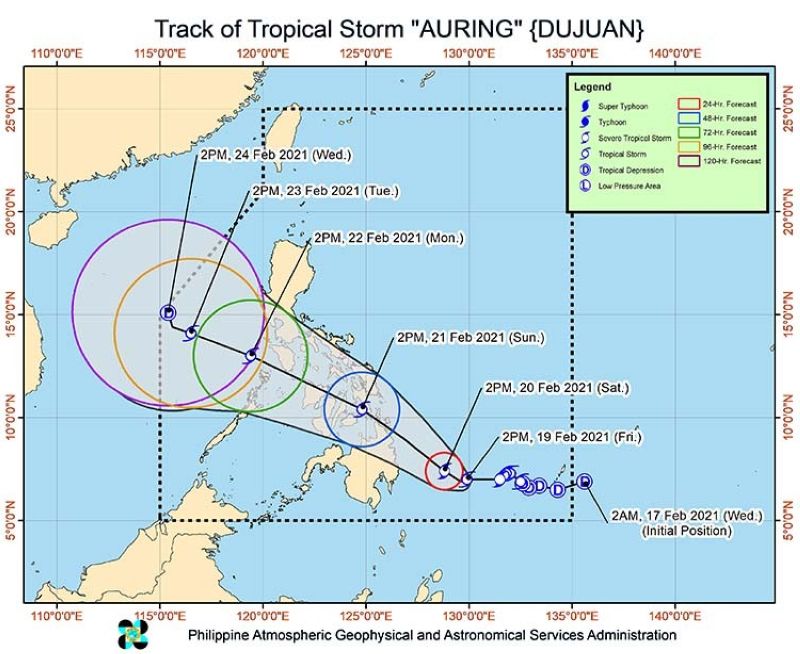 NATIONAL government agencies and even local government units in Cebu are bracing themselves for Tropical Storm Auring (International name: Dujuan), which is expected to make landfall in the Visayas during the weekend.

In preparation for Auring’s impact in the region, officials of the Department of Social Welfare and Development in Central Visayas (DSWD 7) have prepared P22.2 million worth of stockpile aid and standby funds.

“We will be using these funds in case of calamities. If the amount is insufficient to provide aid to those affected, we can always request more from our Central Office,” Geamala said.

She also asked the local government units (LGUs) concerned to inform them of their relief needs.

They have also coordinated with utility firms such as the Visayan Electric Company to address power concerns should some arise.

He also coordinated with the city’s barangays, particularly those which are known to be flood-and landslide-prone.

Karlo Cabahug, head of CDRRMO’s Planning Division, said they have identified 11 barangays that are flood-prone and three that are

In Lapu-Lapu City, local officials have warned their colleagues leading the city’s island barangays to prepare for Auring’s onslaught.

Nagiel Bañacia, Lapu-Lapu’s CDRMMO head, said they have coordinated with the island barangays’ small and medium stores to provide aid to affected islanders.

Bañacia said they coordinated with the island barangays’ small and medium stores as the City might not be able to respond immediately to their aid.

Coastal barangays have been advised to evacuate their constituents living near the shoreline.

The state weather bureau station in Mactan, Cebu, said Cebu is expected to feel the impact of Auring on Saturday and Sunday.

As of 3 p.m. Friday, the center of Auring was estimated at 415 kilometers East Southeast of Hinatuan, Surigao del Sur.

It has a gustiness of 105 kilometer per hour (kph) and is moving West at 15 kph.