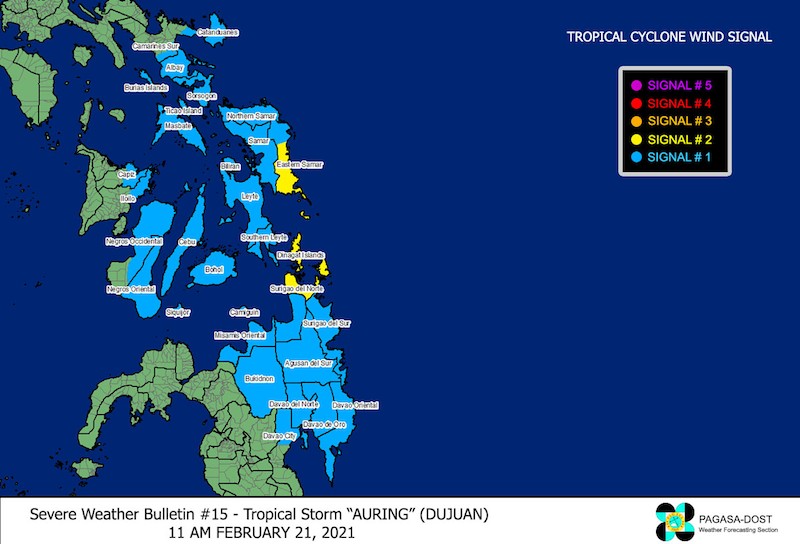 At 10 a.m. Sunday, it was spotted at 335 kilometers east of Hinatuan, Surigao del Sur, with maximum sustained winds of 65 kilometers per hour (kph) near the center and gustiness of up to 80 kph.

The Philippine Atmospheric Geophysical and Astronomical Services Administration (Pagasa) forecast the storm to continue moving generally west-northwestward to northwestward in the next 48 hours.

In the next 24 hours, the combined effects of the surge of the northeast monsoon and Tropical Storm Auring will bring gale-force winds in areas under Tropical Cyclone Wind Signal (TCWS) no. 2.

Strong breeze to near-gale conditions with occasionally higher gusts are seen over the areas where TCWS no. 1 is in effect, as well as over Calabarzon, Mimaropa, Aurora, and the rest of Visayas and Bicol Region.

Sea travel is risky for all types of sea vessels over the following waters.

Rough to very rough seas will be experienced over the seaboards of areas under TCWS, with waves reaching 2.6 to 5.0 meters), and the eastern seaboard of Luzon not under TCWS (2.6 to 4.5 m) in the next 24 hours.

Moderate to rough seas (1.2 to 3.0 m) will be experienced over the remaining seaboards of the country. Mariners of small seacraft are advised to take precautionary measures and inexperienced mariners should avoid going out to sea.

The storm was forecast to make its first landfall over the Dinagat Islands-Eastern Samar (southern portion including Homonhon Island)-Leyte area between Sunday night and early Monday morning, February 22.

Pagasa said there is an increasing likelihood that the storm will weaken into a tropical depression before it makes landfall due to persistent high vertical wind shear associated with the surge of the northeast monsoon.

The weather bureau, however, has not ruled out the possibility that the storm will maintain its strength until landfall.

“After landfall, Auring is forecast to weaken considerably due to significant terrain interaction and the increasing wind shear, leading to deterioration into a remnant low within 48 hours, possibly sooner,” Pagasa added. (MVI / SunStar Philippines)