Flooding in Caraga affects over 13,000 families 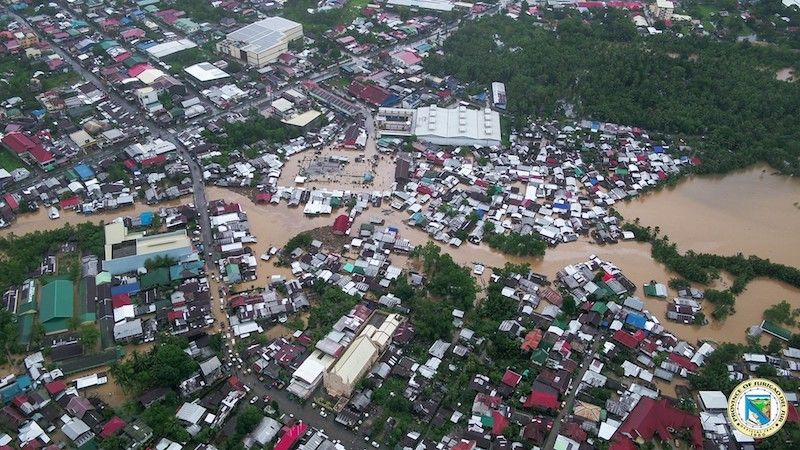 SURIGAO DEL SUR. Aerial view of the flooded communities in Surigao del Sur on February 21, 2021 due to "Auring", a weather system that intensified into a severe tropical storm but soon weakened into a tropical depression as it approached the country's eastern seaboard. (From the Facebook of Surigao del Sur Governor Alexander Pimentel)

OVER 13,000 families in Caraga region were evacuated due to flooding caused by “Auring" (international name Dujuan), which weakened into a tropical depression Sunday night, February 21, 2021.

Timbal said 44 houses in Caraga were damaged while 2,027 passengers were stranded in ports after sea travel was suspended.

As of 8 a.m. the Philippine Atmospheric, Geophysical and Astronomical Services Administration (Pagasa) said TD Auring was heading towards Eastern Samar at 20 kilometers per hour (kph) with maximum sustained winds of 45 kph near the center and gustiness of up to 55 kph.

The weather bureau said the combined effects of the northeast monsoon and Auring will bring strong breeze conditions with occasionally higher gusts over the areas under TCWS number 1, as well as over Aurora, Quezon, Marinduque, Romblon, Oriental Mindoro, Batanes, Babuyan Islands, the northern portions of Ilocos Norte and mainland Cagayan, Cuyo Islands, Cagayancillo Islands, and the rest of Visayas and Bicol Region in the next 24 hours.

Isolated to scattered flooding, including flash floods, and rain-induced landslides are still likely during heavy or prolonged rainfall especially in areas that are highly or very highly susceptible to these hazards, Pagasa said. (Third Anne Peralta-Malonzo / SunStar Philippines)