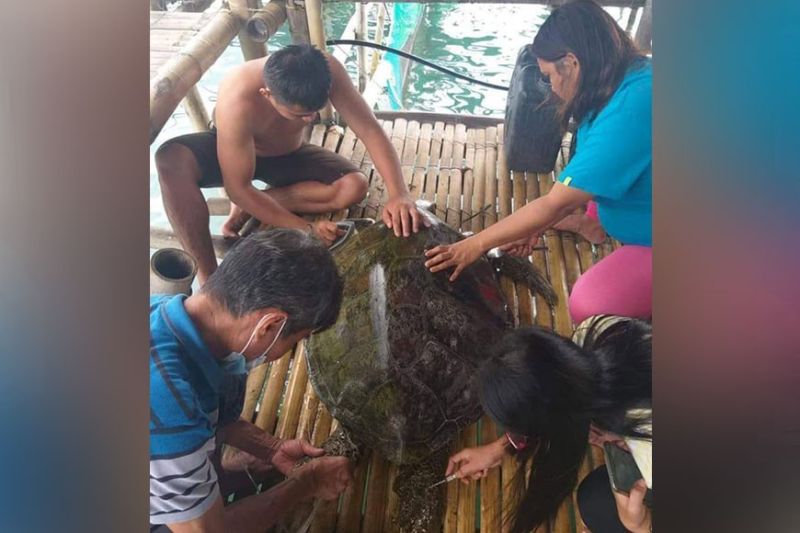 ZAMBOANGA. Environment personnel examine the female green sea turtle they rescue along with the Bureau of Fisheries and Aquatic Resources last week in Kabatan village, Vincenzo Sagun, Zamboanga del Norte. The turtle, however, dies shortly after it was rescued due to ingestion of plastic wastes. (SunStar Zamboanga)

Tan said a team of Cenro-Guipos and BFAR personnel immediately rescued the turtle, but it was weak and covered in barnacles around its plastron, flippers, carapace and neck.

Tan said the turtle died shortly after it was rescued.

He said that in a necropsy examination conducted by Cenro-Guipos and BFAR, the turtle was found to have ingested plastic straw and nylon, which is suspected to be its cause of its death.

He said the turtle was immediately buried to avoid contamination after the necropsy examination.

"This is just one of many incidents of marine species dying due to ingestion of plastic wastes," he added.

In a report made by United Nations (UN) during the 2016 UN Biodiversity Conference, it was found that the number of marine species affected by marine wastes has increased from 633 species to 817 since 2012 and it is also noted that most of these wastes are made from plastics.

Meanwhile, the DENR regional office urged and reminded everyone to help on the conservation and protection of our environment and natural resources.

The DENR also continued its Information Education and Communication campaign efforts in order to spread more awareness and knowledge on solid waste management and the harmful effects of marine litter to organisms in our oceans. (SunStar Zamboanga)