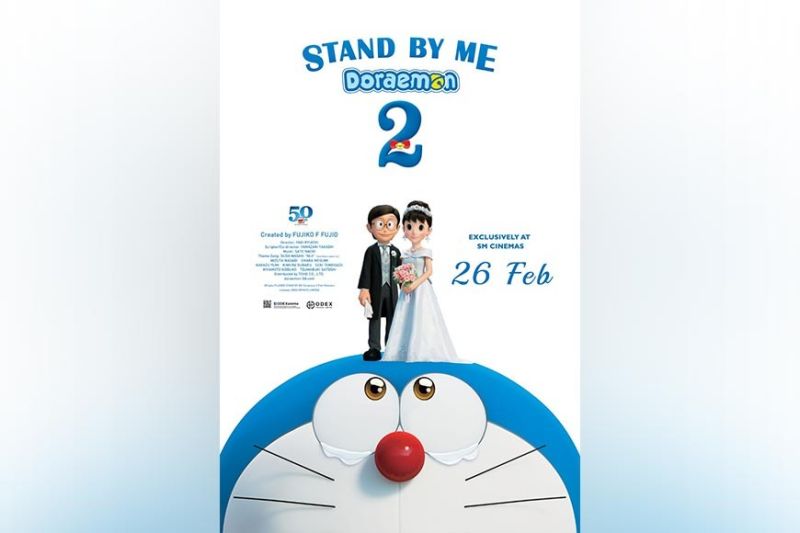 THE sequel to the phenomenal touching story, "Stand by Me Doraemon," that made even adults cry will exclusively be shown in the cinemas of SM CDO Downtown Premier this Friday, February 26.

Prior to the release in November 2020, fans of the popular childhood anime series Doraemon went wild in social media after seeing the poster of "Stand by Me Doraemon 2," which depict protagonist Nobita Nobi in a suit and his childhood friend turned sweetheart Shizuka Minamoto in a wedding dress.

The "Stand by Me Doraemon 2" follows the story of Nobita and the blue cat-shaped robot from the 22nd century, Doraemon, going back and forth to the past, present and future; meeting the adult and younger selves of their friends; and, as usual, solving problems using Doraemon's futuristic devices and put everything into order.

One day in the present, in the daily life of Nobita and Doraemon, Nobita discovers a teddy bear in his room. The teddy bear is an important memento of his late grandmother who passed away when he was still in kindergarten, as she would always repair it for him.

Reminiscing about his beloved grandmother, Nobita finds himself unable to stop crying. He tells Doraemon he wants to see her, suggesting they use a time machine to do so. Initially, Doraemon disagrees, but eventually gives in on the condition that Nobita returns immediately after seeing his grandmother. He is not to meet her in person. The pair then departs to the past, when Nobita was three years old.

Nobita secretly watches his grandmother from behind, suppressing his desire to meet her. However, his grandmother discovers him and was surprised to see Nobita in elementary school. Nonetheless, she accepts him just as kindly as she did back then.

"I want to see Nobi-chan's bride."

With those words from his grandmother, this time, Nobita and Doraemon set out to the future. However, on the wedding day, Nobita ran away.

The adult groom Nobita is nowhere to be seen at the wedding hall.

The Making of the Film

"Stand by Me Doraemon 2" is handled by the collaboration of director Ryuichi Yagi and screenwriter/co-director Takashi Yamazaki.

The sequel to the first Doraemon movie to use 3DGC animation, "Stand by Me Doraemon 2" is based on "Memories of Grandma," which is widely known as a masterpiece in the original story.

In addition to that, two other episodes are included in the movie's script, one of which is "The Day I Was Born" which is a story when Nobita visits the day he was born using the time machine and learns both the origin of his name as well as his parents' feelings towards him.

"When people see themselves and their families in the activities of the characters, I think they are moved," Yamazaki said.

"The original Doraemon work has that kind of power. Nobita is a character that has the power to make people relate to him, besides I made this work while thinking about my parents and grandmother, so I think a lot of people can relate to their own stories as well. I hope they will think of their parents and family," he added.

Yagi, for his part, said the stories in this film are about the present, past and future; the various occasions of "One Day."

"Those 'One Day' are the day of the birth, birthday, wedding day... The day of any important event. Conversations with grandmother may seem normal in everyday life, but sometimes you realize that a casual 'One Day' was important when recalling it later," Yagi said.

"My hope for people who'll watch the movie is that they can remember he milestones in their life, just like me. 'Stand by Me Doraemon 2' depicts such 'One Day' occasions that all generations who know Doraemon can sympathize with. Please try to experience a little mystery in your 'One Day.'" he added.