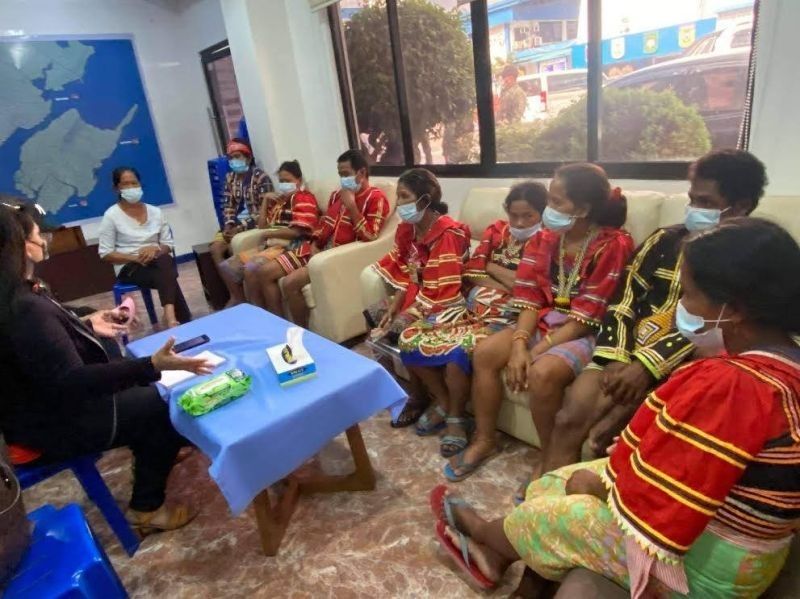 LOCAL police authorities are searching for the parents of the four Lumad children in Davao del Norte who were reportedly rescued during a raid in Cebu City, as they are currently missing after they were allegedly taken by the communist terrorist group (CTG).

Government authorities from the Police Regional Office (PRO)-Central Visayas, with representatives from the Department of Social Welfare and Development (DSWD) and social workers from Cebu City and Talaingod, barged a retreat house inside the University of San Carlos (USC)-Talamban campus on February 15, 2021 to "rescue" 19 minors, 13 of them are Lumad children from the Ata Manobo in Talaingod, Davao del Norte.

Police officials said six parents of the children came to Cebu City to "retrieve" their kids after complaining that the minors were taken by a group called Salugpungan 'Ta Tanu Igkanogon Community without their consent.

The children were allegedly told they were to go to Davao City to study but were brought instead to Cebu City where they stayed at the USC's retreat house in Talamban.

The 13 children, along with six parents and other companions, boarded a flight bound for Davao City on Sunday night, February 21.

During a press conference Tuesday morning, February 23, PRO-Davao spokesperson Eudisan Gultiano said that on February 22, the 56th Infantry Battalion and other personnel of the Philippine National Police (PNP) went to Sitio Camingawan in Talaingod to fetch the parents and inform the arrival of their children.

They were, however, only able to fetch two parents from the area.

Gultiano said they found out that four parents were "taken by the CTG a day earlier by introducing themselves as police officers and telling them that their children were rescued, and they need to go with them in Cebu City."

"This shows the deception of these front organizations by committing illegal activities to advance their cause. These parents were taken through deception, and we are looking kung saan ngayon ang mga (the whereabouts of these) parents," she said.

The four missing parents, according to the officials, are those who gave permission to Children's Legal Bureau (CLB), a non-government organization (NGO), who claimed that the parents sought their assistance.

PRO-Davao Director Filmore Escobal belied the claims of CLB that they were contacted by the parents to represent the children.

"Hindi po totoo yun kasi bago nagkaroon ng action ang Philippine National Police, dumulog na sila sa ating local police dito at nakunan sila ng affidavit tungkol sa kanilang reklamo. 'Yung affidavit is hawak-hawak namin iyon (That is not true. Prior to the operation of the PNP, the parents went to their local police and we were able to submit their affidavit of complaint. We have their affidavits.)," Escobal said.

A total of 11 parents submitted their complaint, he said.

Prior to the children's return to Davao, CLB was at the Mactan airport to try to stop the group from leaving.

The CLB, in a statement, said the seven Lumad students whose parents sought their assistance "were transported without consent from their parents and proper coordination by authorities involved."

The students consisted of five minors and two 18-year-olds.

The CLB said the parents have been informed about this development and that they have yet to receive information on the proper turnover of the students.

Escobal also belied their claims, questioning how CLB was able to communicate with the parents considering that Talaingod's area has poor communication signal.

"Itong ginagawa nila is a modus operandi lang," he said.

Escobal said four missing parents were "kidnapped" and they are now searching for them.

Talaingod Mayor Jonnie Libayao said they already have the custody of the 13 Lumad children, who are currently under isolation, as part of the Covid-19 protocol for returning residents.

He said they have yet to get their testimonies on their situation in Cebu once they finish their quarantine.

Libayao also slammed CLB's claims, saying the transport of the children to Cebu had "no consent."

From Davao to Cebu

In a recent report, the parents were allegedly told that their children will go to Davao City for their studies but were brought instead to Cebu City where they stayed at USC's retreat house in Talamban.

Prior to the operation, Gultiano said in her report that one former Salugpungan teacher, who surrendered to the National Intelligence Coordinating Agency-Davao (NICA-Davao), gave information on the whereabouts of the 13 children.

According to her report, the minors were brought to UCCP Haran in Davao City in 2018 by a Salugpungan teacher only known as "Michelle" without the consent of the parents.

Upon receiving the information on January 25, 2021, the PRO-Davao, in coordination with Nica-Davao and the Municipal Social Welfare and Development (MSWDO), went to the office of the Municipal Tribal Council elders in Talaingod and met with Indigenous Peoples Mandatory Representative (IPMR) Bai Pilar Libayao to discuss the information.

She said that on January 29, the team met the parents of the minors and they learned that the Salugpungan teacher asked permission from the tribal council to transport their children only to UCCP Haran in Davao City for them to continue their studies with the condition that their children can visit them every month.

"This promise did not happen because the minors were brought to Cebu City, instead," Gultiano said.

On February 8, the parents filed complaints to the municipal tribal council. Libayao signed a resolution requesting the MSWDO, PNP, and other concerned agencies to assist and help the parents in getting back their children.

On the same day, the team took the affidavits of nine parents and also got the birth certificate of the minors from the local civil registrar of Talaingod.

The complaint was recorded at the Women and Children Protection Desks (WCPD) blotter of Talaingod.

The team, along with the parents, traveled on a vessel to Cebu to rescue the children.

The charges were filed by the Philippine National Police Anti-Kidnapping Group (AKG) before the Davao del Norte Provincial Prosecutors' Office in Tagum City during virtual inquest proceedings held via Zoom videoconferencing app at the PRO-Central Visayas.

Lumad is a Visayan term referring to indigenous peoples (IP). The seven were among 26 persons rounded up in what the police claimed was a "rescue operation" at a retreat house inside USC-Talamban campus. (With reports from SunStar Cebu)