Duterte-Carpio calls for a stop on 'Run, Sara, Run' motorcades 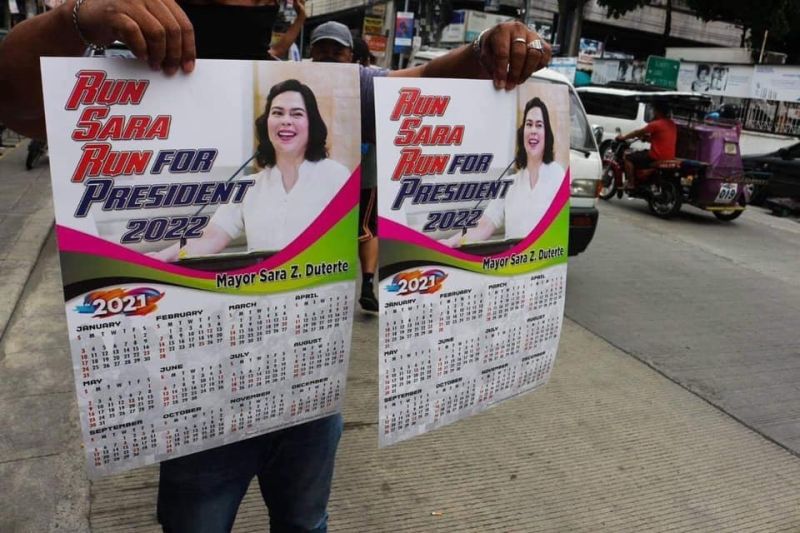 DAVAO City Mayor Sara Duterte-Carpio barred her supporters in the city from organizing motorcades prodding her to run for president in 2022.

In a radio interview on Monday, February 24, Duterte-Carpio said some barangay officials, along with some supporters in the city, are planning to stage a motorcade to convince her to run for the presidency.

Duterte-Carpio told organizers to better save the fuel of their vehicles for some other essential purposes because she is firm in her decision not to run in the upcoming elections.

The mayor also told the group not to push through with their activity since the city is still under pandemic.

Duterte-Carpio added the city has an existing ordinance prohibiting motorcade as this contributes to air pollution.

The mayor also ordered the removal of tarpaulins, posters, and billboards with the text "Run, Sara, Run," mounted by her supporters in some parts of the city.

She told the public to report the location of these posters so that the city can remove these and return these to the owners.

With the increasing number of supporters, not only in Davao City or Davao Region, but also in some parts of the country, Duterte-Carpio reiterated her previous statement that she will not be running for the national post.

"Tingala siguro ang mga tao ngano wala ko ginahatag nga rason kung ngano dili ko gusto mudagan pagkapangulo. Sa ilang tan-aw siguro, there is this chance nga tingali magbag-o akong huna-huna or wala ko nagsulti og tinuod (They might wonder why I am not giving any reasons why I am not running for the presidency. They thought there is this chance that I might change my mind, or that I am not telling the truth)," the mayor said.

"Ako na lang ginasulti pirmi is nagapasalamat ko sa ilang trust and confidence sa akoa, and nagapasalamat ko sa ilang suporta sa ako (What I am always saying is that I am very grateful for their trust and confidence in me, and that I am always thankful for their support). But I already answered that," Duterte-Carpio said, adding that there is "no chance" of changing her mind.

The mayor did not further disclose her reasons not to run, although she previously said she has many reasons behind it.

She added she does not want to offend any people on her decision.

The mayor had been shutting down rumors of her planning to run for presidency despite constant calls from her supporters, and has been leading in various surveys from different polling bodies for the 2022 presidential elections.

The mayor responded through a statement issued to national media saying that she is not planning to run in 2022, but in 2034.

"I am pleading to them to please allow me to run for President in 2034, if at that time, there is something I can do to help the country," she said.

Duterte-Carpio said in a recent interview that she is currently focused on addressing the Covid-19 situation in the city.

President Rodrigo Duterte, in recent public speeches, also does not want his daughter to run for presidency.