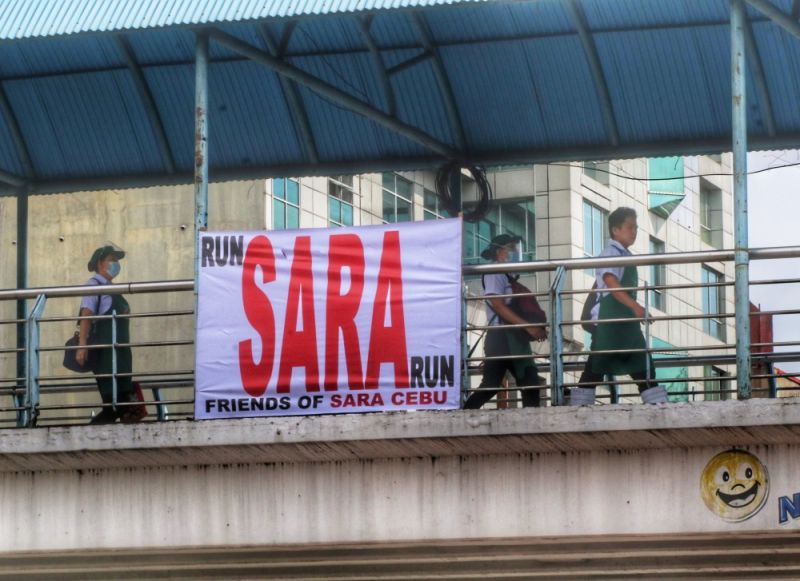 NO PERMIT. The Cebu City Office of the Building Official orders the removal of the “Run Sara Run” streamers along Osmeña Boulevard and General Maxilom Ave. as these have not been approved by the city. (AMPER CAMPAÑA)

STREAMERS showing calls for presidential daughter and Davao City Mayor Sara Duterte-Carpio to run for President in 2022 are set to be removed from various parts of Cebu City.

Cebu City Office of the Building Official (OBO) head Florante Catalan said he ordered his personnel to remove the “Run Sara Run” streamers after they found that those who posted them failed to secure an application from the city.

Streamers imprinted with “Run Sara Run” which were posted by the group “Friends of Sara Cebu,” were seen hanging on a skywalk located along Osmeña Boulevard and General Maxilom Ave.

According to earlier reports, the presidential daughter said despite calls for her to run, she had no plans to succeed her father, President Rodrigo Duterte.

Catalan said he will inform the Prevention, Restoration, Order, Beautification and Enhancement (Probe) team to remove the streamers since they are the office in charge of the removal of the illegal streamers.

Cebu City Mayor Edgardo Labella said though it is the right of the people to launch such an initiative, the City has to see to it that streamers posted along the city’s streets are up to regulation.

Under Cebu City Ordinance 1656, or the city zoning ordinance, anyone who puts up streamers, tarpaulins, banners and similar materials in the city must get a permit from the OBO.

The city’s zoning ordinance was enacted in 1996. (JJL)