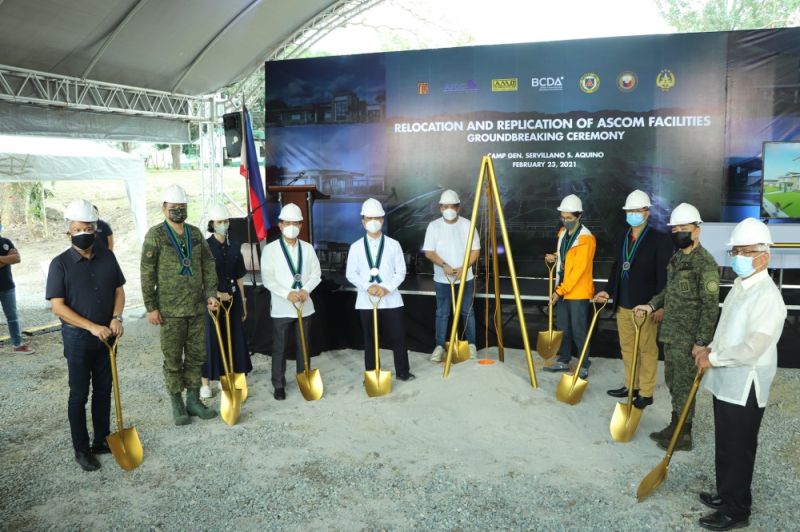 GROUNDBREAKING. Officials from Bases Conversion and Development Authority, Department of National Defense and Armed Forces of the Philippines hold a groundbreaking ceremony for the construction of Army Support Command facilities in Camp Servilliano Aquino, Tarlac. (BCDA)

THE Bases Conversion and Development Authority (BCDA) and the Department of National Defense (DND) recently broke ground for the transfer of the Army Support Command (Ascom) facilities in Tarlac next year.

Ascom facilities in Fort Bonifacio, Taguig are set to be transferred to a new P1.5-billion project site in Camp Servillano Aquino in Tarlac City.

Under the four-phase development plan, 44 structures will be built including multiple headquarters facilities, officers' quarters, barracks, a warehouse, student classrooms and transportation and maintenance battalion areas.

"BCDA has been working closely with DND and the Armed Forces over the years to make the vision of modern Ascom logistical facilities a reality. We feel that this is a sound investment which not only puts Ascom in a better position to serve the military but opens up new opportunities for the national government to generate much-needed revenues by developing the soon-to-be-vacated Army areas in Fort Bonifacio," Dizon said.

In line with its mandate under Republic Act 7227 to generate funds for the DND-Armed Forces of the Philippines (AFP) Modernization Program, BCDA together with its joint venture partner SM Prime Holdings, Inc. has been preparing the development of the 33.13-hectare Bonifacio South Pointe Property inside Fort Bonifacio.

Of this prime lot, some 11.5 hectares is currently occupied by Ascom, as well as the Service Support Unit (SSU) and the Division Administrative Command Center (DACC), all under the Philippine Army.

Under the BCDA-DND/AFP memorandum of agreement signed by Sec. Dizon and Defense Sec. Delfin Lorenzana in February 2017, both parties agreed that, "To implement the planned disposition and development of Bonifacio South Pointe by BCDA, there is a need to clear the property from its present occupants and existing facilities."

DND and the AFP identified the relocation site in Camp Aquino. For its part, BCDA is responsible for the construction of structures and facilities, as well as the engagement of consulting services for engineering design and construction management.

Speaking on behalf of Armed Forces Chief of Staff Lieutenant General Cirilito Sobejana, Burgos said the AFP recognizes the role of BCDA as a prime mover of national development by transforming former military bases into premier centers of economic growth.

“The transfer of Ascom here at Camp Aquino is very timely as it will not only boost the unit’s capabilities to carry out its mission and functions but it also reinforces its thrust to sustain personal readiness and enhancement of its operations and even gain momentum towards modernization,” Burgos said.

He added that, “Ascom plays a very significant role in the Armed Forces and the PA because they provide the logistical support to all the Army units not only in Luzon but also in Visayas and Mindanao. This is why Ascom should be situated in a strategic location, like here in Camp Aquino.”

Cruz said compared to Fort Bonifacio in Taguig, Camp Servillano Aquino is a more strategic location for logistics support and the deployment of support services.

“Considering the congestion in Metro Manila, the ease of our movement and security of our access from one place to another has already been affected. The new Ascom area provides us with easier and more efficient logistics operations,” Cruz said.

The Armed Forces is the biggest recipient of BCDA contributions to the government, bankrolling the military's modernization program for nearly three decades.