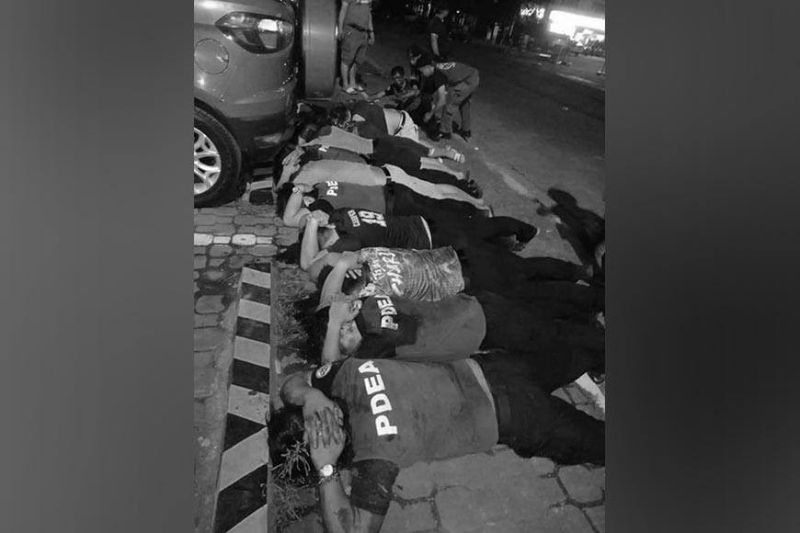 MANILA. Philippine Drug Enforcement Agency (PDEA) lie face down with their hands behind their heads after a shootout with the police on Feb. 24, 2021. (Contributed/PNP-PIO)

TWO policemen were reportedly killed, another was critically wounded and three agents of the Philippine Drug Enforcement Agency (PDEA) were wounded in a shootout along Commonwealth Avenue in Quezon City on Wednesday, February 24, 2021.

Based on the initial report from the Batasan Police Station, the shootout happened at 5:45 p.m. in the parking lot of a fast food restaurant beside a mall along Commonwealth Avenue in Barangay Batasan Hills.

Police said personnel of the Quezon City Police District (QCPD) Special Operations Unit were conducting a drug bust in the area when they found out that they were transacting with PDEA agents.

PDEA spokesperson Derrick Carreon said the agents, some of whom were wearing shirts marked with PDEA, were in the area for a legitimate operation.

The police report said the PDEA agents engaged the police in a shootout.

Reports from the ground said two policemen were killed. These were being verified.

Both PNP Chief Debold Sinas and PDEA Director General Wilkins Villanueva went to the site to oversee the investigation.

PNP spokesperson Brigadier General Ildebrandi Usana said the PNP and PDEA will form a joint board of inquiry to determine the circumstances and identify those liable for the incident.

“The PNP and PDEA both agree and assure the public that the incident, while serious, will in no way affect the continuing operational relationship and coordinations they have long firmed up in the fight against illegal drugs,” he said.

Ever Gotesco Malls, in a statement, said all customers and employees were safe inside the mall as the shootout occurred outside the grounds of Ever Commonwealth.

“We have also immediately closed the mall early today. No customer or employee of Ever was harmed or injured during the incident. We are continuously cooperating with the authorities of any information that may aid them in handling the situation,” the company said in a statement. (SunStar Philippines)