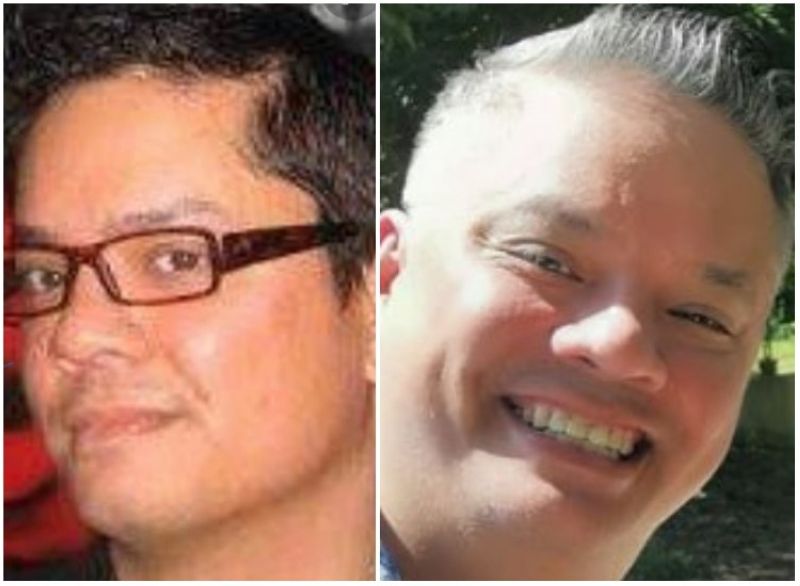 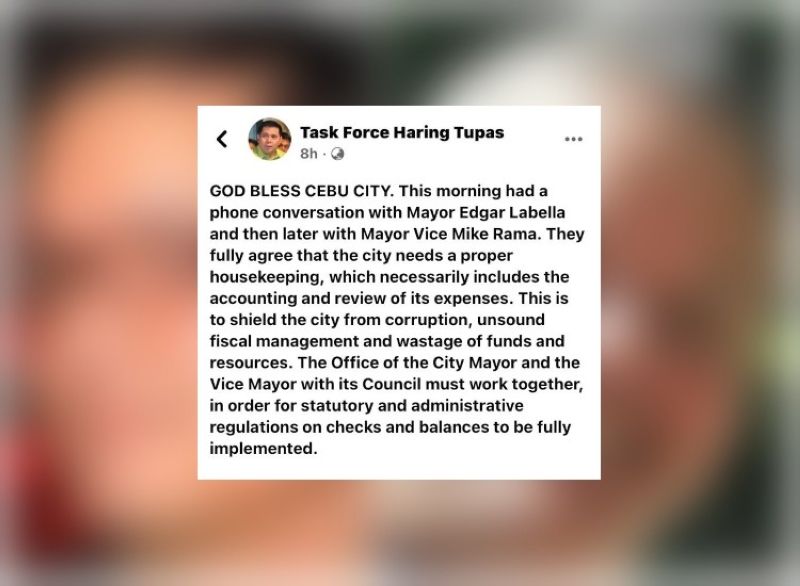 CEBU. Clarence Paul Oaminal, who has repeatedly been lashing at a “Cebu City Kurakot Gang” on his Facebook wall under the name Task Force Haring Tupas, announced that he talked on the phone Thursday morning, February 25 with Mayor Edgar Labella and later with Vice Mayor Mike Rama. (Screenshot from Task Force Haring Tupas)

CLARENCE Paul Oaminal, who has repeatedly been lashing at a “Cebu City Kurakot Gang” on his Facebook wall under the name Task Force Haring Tupas, announced that he talked on the phone Thursday morning, February 25 with Mayor Edgar Labella and later with Vice Mayor Mike Rama.

Atty. Oaminal -- former undersecretary of the Dangerous Drugs Board, advocate against crime and corruption, and Cebu City 2015 Charter Day mayor’s special awardee for his advocacy – didn’t say the mayor and vice mayor initiated the phone calls. But the talk came amid media chatter on Oaminal’s CC Kuratong Gang charge in relation to the accusation of Councilor Prisca Nina Mabatid that a figurative “witch” (“ungo”) is calling the shots (“dictating”) at City Hall.

[1] Labella and Rama “fully agree” on “proper housekeeping,” including accounting and review of expenses, “to shield the city from corruption, unsound fiscal management and wastage of fund and resources.”

[2] The top officials also agree that the mayor and vice mayor, with the City Council, “must work together” for statutory and administrative regulations and “fully implemented” “checks and balances.”

[3] Oaminal “confided” with the mayor that it would be “prudent” for City Hall officials to be “sensitive” to Cebuanos on the said officials’ lifestyle during the pandemic when most have lost their job and are hard up.

NOTHING ABOUT KURATONG. Oamnal didn’t include in his post anything about his allegation of the existence of a Kuratong Gang at City Hall, whom the lawyer, book author and newspaper columnist accused publicly of getting commission (or kickback) from swab tests, isolation centers, among others.

He did not say:

[1] If Labella and Rama acknowledged or denied the presence of such a gang;

[2] If the two top officials demanded evidence from him;

[3] Whether they would investigate his accusation or promised the activities Oaminal complained about would stop.

[4] What the reaction of the two high officials was to the twin public charges of Councilor Mabatid and Atty. Oaminal and if Labella and Rama saw any truth to them.

The public would be interested to know what happens next: Would Haring Tupas now stop complaining about the CC Kuratong Gang, in the same way Councilor Mabatid seems to have stopped whining about having been left out of the loop?

Remember how John Gregory “John-John” H. Osmeña Jr., only child of the late John Henry “Sonny” R. Osmeña, looked when the young Osmeña was Cebu vice governor? You must want to see how he looks now.

Check out the before-after photos above, the latest photo provided by Ferliza C. Contratista, publicist of the deceased Osmeña.

Contratista told SunStar John-John dropped by Cebu City on February 10, the same day the City Council held a virtual necrological service for Sonny, who was a former OIC mayor and councilor of the city. It was not reported if he attended the service but he “passed by” the city on his way to Negros. Contratista could not tell if he was still in the country or had returned to Denver, Colorado, USA where he was last known to have been residing and working (at a university).

NOT LIKELY TO RUN. There is no indication yet that John-John would pick up the political career that his dad left, a speculation that must excite City Hall watchers.

Eight years ago, in 2013, he said he had no plans to return to the Philippines for anything other than a visit. “I will be living and working in the US for the foreseeable future,” he told then print-version Cebu Daily News.

Would he be qualified to run?

He must be a registered voter and must reside in the country for one year before election day on May 9, 2022. He would’ve to reestablish his residence, which he abandoned when he left the country in 2004. There might also be a need to re-claim his Filipino citizenship, if he is already an American citizen.

CLEARED ON PERDIDO LEX FRAUD. As to the charge of corruption filed against him and other officials of Capitol in connection with the Perdido Lex foundation P5 million fraud, the Sandiganbayan in a January 21, 2013 resolution dismissed the case against John-John and his house helper, who was listed as incorporator of the foundation.

The anti-graft court adopted John-John’s defense that he was “framed,” possibly a victim of the scramble to the top post in the Capitol. Initially groomed for governor, he lost in the 2004 race to Gwen Garcia who was then chief of staff of her dad governor Pablo Garcia, when the Perdido Lex scandal exploded. The original plan was for a John-John-Gwen tandem.

No, John-John is held very unlikely to plunge into local politics again, which 17 years ago badly thrashed and left him bitter lessons. He returned to Cebu presumably to pay respects on Sonny’s death and look into his dad’s estate. But in politics, the word “never” is hardly said or meant.