Drug syndicate may have set up misencounter, PDEA says 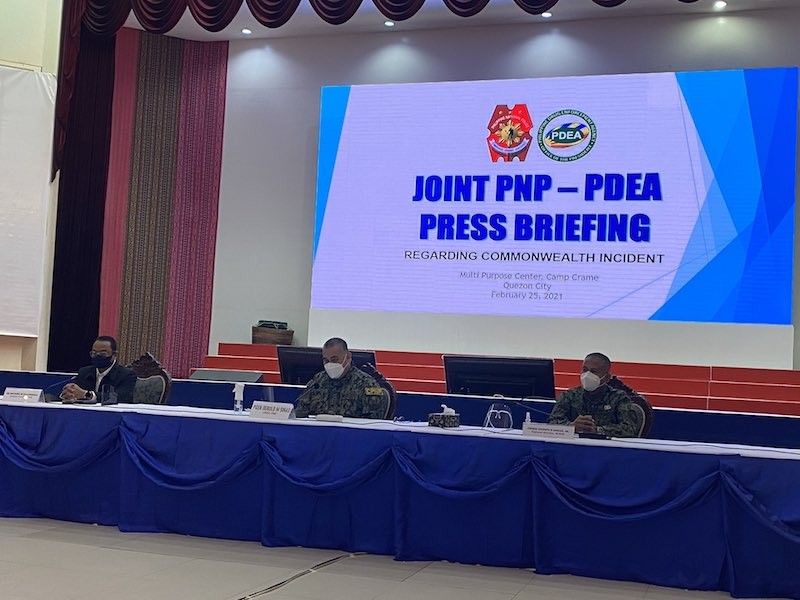 MANILA. Officials of the PNP and PDEA hold a joint press conference on February 25, 2021, a day after a misencounter between their personnel killed two policemen, one PDEA agent and an asset. (Third Anne Peralta-Malonzo)

TOP officials of the Philippine National Police (PNP) and the Philippine Drug Enforcement Agency (PDEA) on Thursday, February 25, 2021, said they have yet to reconcile the conflicting versions of the shootout between their personnel in Quezon City.

What was clear, so far, was that it was a misencounter, they said. Both the PNP and PDEA teams were conducting legitimate operations.

Four - two policemen, one anti-narcotics agent and an asset - were killed. Four others were wounded. The shootout occurred near a mall along Commonwealth Avenue in Quezon City on February 24.

In a joint press conference at Camp Crame Thursday, PDEA Director General Wilkins Villanueva said it was possible that a drug syndicate had set up the misencounter.

(We will look into the possibility that a syndicate may have pitted our personnel against each other.)

This is among the possible scenarios being looked at by the joint board of inquiry that the PNP and the PDEA formed.

Villanueva said the board will also look into the coordination between the PNP and PDEA before the conduct of their respective operations in the area, the alleged sell bust which is illegal and sabotage.

As of Thursday, both the PNP and PDEA officials said they have yet to establish the truth about the shootout.

“Pwede ba pagbigyan n’yo muna ang board of inquiry to come up with a good and authentic investigation. Kasi according sa PNP ito ang nangyari, according sa PDEA ito ang nangyari. Hindi naman namin pwedeng pagsabungin ang sarili natin, but both of them are doing their job,” Villanueva said.

PNP Chief Debold Sinas said the board of inquiry was still gathering evidence, such as surveillance camera footage, and testimonies of those involved in the incident.

He said at least 17 policemen and PDEA agents were directly involved in the said operations. All are now under the custody of the Criminal Investigation and Detection Group (CIDG) for questioning.

A spot report issued by the Batasan police station said personnel of the Quezon City Police District Special Operations Unit were conducting a drug bust in the parking lot of a fast food restaurant along Commonwealth Avenue when their subject fired shots at them to evade arrest.

A gunfight ensued. Police later found out that they were dealing with PDEA agents.

Based on a PNP coordination form obtained by reporters, the police informed PDEA about the operation on February 23. The document was marked as received by PDEA.

The PDEA has yet to issue its own spot report on the matter. Its spokesperson earlier said their agents were in a legitimate operation.

Villanueva said the PNP’s spot report is not reliable for now and should not be considered correct yet until the joint investigation yields results.

Both agencies were mum about any evidence that may have been gathered during their operations.

Sinas and Villanueva both welcomed the conduct of a parallel investigation by the National Bureau of Investigation (NBI) as ordered by Justice Secretary Menardo Guevarra.

Villanueva, however, said they will prioritize the conduct of their own investigation for the sake of their agents who died in the operation.

Sinas vowed to charge those who will be found liable for the bungled operation.

“Isa po sa agreement (with the) director ng PDEA, we will find out what really happened. Kung sino talaga may sala, whether PDEA or PNP, we’ll file a case against and whatever evidence warrant we will go for it. Wala po kaming pagtatakpan,” he said.

Sinas said despite the unfortunate incident, the PNP and PDEA have maintained their good working relationship.

He said their fight against illegal drugs will continue. (SunStar Philippines)