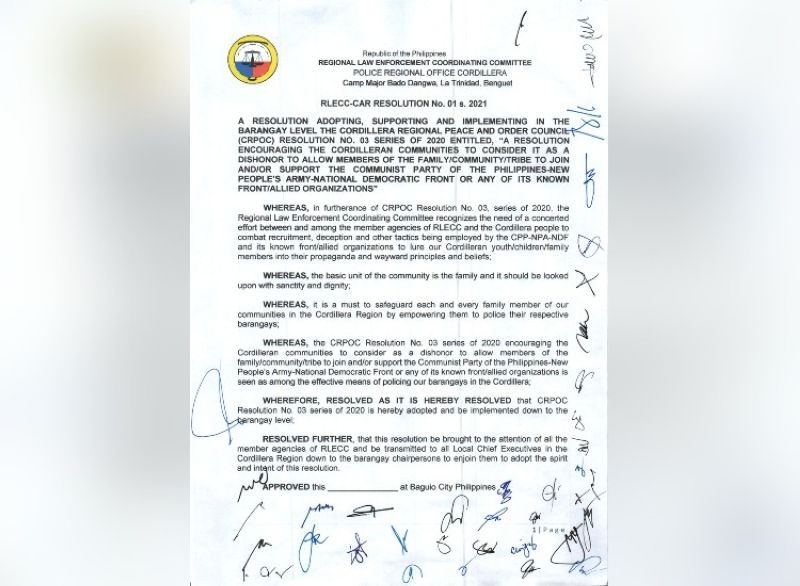 TOKHANG FOR LEFTISTS. A copy of the resolution signed by all members of the Regional Law Enforcement Coordinating Committee in the Cordillera Administrative Region allowing the conduct of “Oplan Tokhang” against “left-leaning personalities” in the government and media, among other entities. (Contributed photo)

THE Regional Law Enforcement Coordinating Committee in the Cordillera Administrative Region drew flak from human rights advocates and members of the media after passing a resolution allowing the conduct of “Oplan Tokhang” against “left-leaning personalities” in the government and media, among other entities.

In the resolution, Tokhang will be used “to convince left-leaning personalities to return to the folds of the government and dissuade them from further supporting the Marxist-Maoist inspired rebellion and its known front organizations.”

However, members of the Baguio Correspondents and Broadcasters Club (BCBC), the largest and oldest media organization in the Cordillera, said the resolution sends a chilling effect to the people who believe in the freedom of expression and who have still faith in democracy.

“The word tokhang will never be forgotten by the families, friends, relatives, and survivors of the war on drugs that was boasted as the solution to the drug menace and drug trade,” the statement said.

Aldwin Quitasol, BCBC president, added the "Oplan Tokhang" used in the government's war on drugs by visiting or knocking on the doors of suspected drug personalities and plea for them to stop dealing and using drugs will be used against known "left-leaning personalities" to dissuade them from supporting or being active members of the Communist Party of the Philippines-New People's Army-National Democratic Front (CPP-NPA-NDF) or any of its so-called known front organizations and return to the folds of the law.

“Whenever the media interviews people who are critical to someone else especially those who are in government positions or those who have power and they will publish it, they will be perceived as siding with the critics. Whenever the media writes, broadcasts or publishes information so that the citizens will be challenged to think or make a realization of their leaders’ successes or failures and from that, an open exchange of ideas and opinions flourish, they will be branded as bias. Whenever the media conveys the people’s concerns, demands, desires, and pleas to government bodies, they will be bombarded with legal actions and condemnation from the people who are supposed to be standing by the provisions of the Philippine Constitution on the rights of every Filipino,” added Quitasol.

Commission on Human Rights (CHR)–Cordillera Regional Director lawyer Romel Daguimol withdrew his signature from the resolution, saying insurgency must be addressed, but it must be done with human rights at its core.

“We continue to condemn terrorism, as well as the use of armed struggle to topple the government. But we continue to stand that activism is not a crime. Our people should be free to express legitimate dissent and grievances for the government to act on. With our concerns with ‘Oplan Tokhang’ and fears of red-tagging left unaddressed, supporting the said resolution runs inconsistent with the official position of the CHR,” said Daguimol.

“Will we see more activists killed under the same ‘nanlaban’ narrative, with guns and other firearms planted near their corpses to justify their gruesome murders at the hands of State forces? Many of our colleagues were killed or arrested in such a manner, and it makes us shudder to think that this resolution to conduct ‘tokhang’ against ‘left-leaning’ personalities is a clear State policy declaring open season for the killings of activists. Those who signed the said resolution should be ashamed of themselves, and any killing, threat or arrest of individuals tagged as sympathetic to the Left is on their list of crimes,” Karapatan Secretary General Cristina Palabay said. (Roderick Osis)