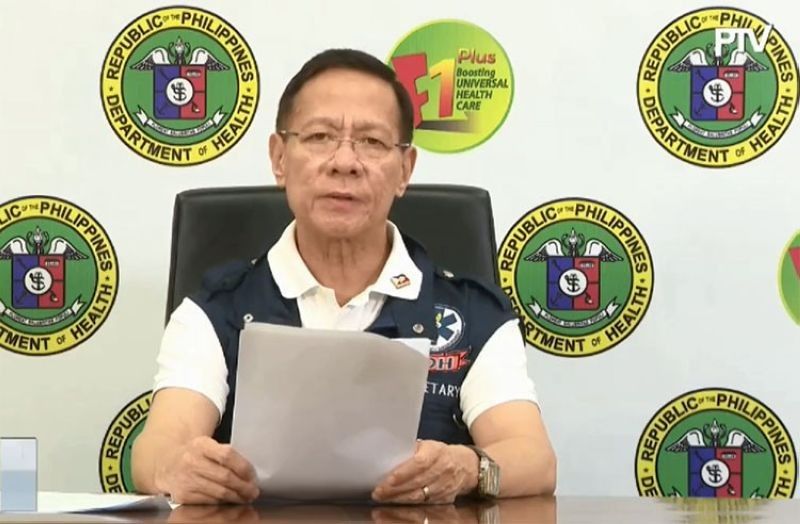 DEPARTMENT of Health (DOH) Secretary Francisco Duque III on Wednesday night, February 24, 2021, said healthcare systems in all regions were still generally in the safe zone as only about half of the facilities designated for the pandemic were in use.

However, Duque said Baguio City was considered a high risk while Lapu-Lapu City (Cebu), Santiago City (Isabela), Makati City, and the provinces of Davao de Oro and Isabela were classified as moderate risk.

Among the regions, Central Visayas and Davao had the highest health care utilization rates (HCUR) of 48 percent and 47 percent, respectively.

The HCUR, which refers to the proportion of beds and ventilators being used by coronavirus disease 2019 (Covid-19) patients, is the parameter used by the Inter-Agency Task Force (IATF) for the Management of Emerging Infectious Diseases in the escalation of risk classifications.

Nationwide, Duque said infections have plateaued or even slowed down.

Five regions--Cordillera, Central Visayas, Davao, Caraga and NCR--had attack rates higher than the national average. The average daily attack rate, which represents the risk of contracting Covid-19, was 1.56 per 100,000 population for the entire country.

Duque said areas with confirmed variant cases, such as Central Visayas, should intensify implementation of the prevent, detect, isolate, treat and reintegrate strategy.

Health officials are investigating a possible variant in Cebu in Central Visayas, where two mutations of Sars-CoV-2 were detected in more than 30 cases.

Duque said the risk of Covid-19 transmission was especially high in the cities of Cebu, Mandaue and Lapu-Lapu, all in Cebu Province.

Lapu-Lapu City was at “moderate risk” of running out of Covid-19 beds and ventilators with an HCUR of 69 percent, he added.

Meanwhile, more hotels in Cebu City will be used as isolation centers for Covid-19 patients.

The Cebu City Emergency Operations Center (EOC) is working with the DOH Central Visayas and Department of Tourism (DOT) for the use of hotels in the city as isolation facilities.

She said Covid-19 patients and those with mild symptoms can proceed to the isolation hotels.

Chief implementer of the Inter-Agency Task Force (IATF) for the Visayas Melquiades Feliciano, in a forum organized by the Cebu Citizens Initiative on Feb. 25, 2021, said 100 more beds in the existing

isolation hotels will be added by the end of the week.

EOC data showed that as of Feb. 25, 51 beds are still available in these five hotels.

available; and the Travel Bee in Fuente Osmeña that offers 26 rooms which are all occupied.

There are 173 Covid-19 patients currently isolated in these hotels as of Feb. 25.

Garganera said by next week, 50 more rooms will be added as Grand Hotel will also be used as an isolation hotel.

He added that opening more hotels can help prevent overwhelming the hospitals in the city.

The EOC noted that 30 percent out of the 50 percent critical care occupancy rate in the city’s 15 hospitals are mild and asymptomatic patients.

Rates per night in an isolation hotel range from P1,500 to P4,800 inclusive of breakfast, lunch and dinner.

In Mandaue City, the Emergency Operations Center (EOC) for Covid-19 will soon use the former North Bus Terminal exclusively for Covid-19 patients, in view of the increase of the number of Covid-19 cases in the city.

The former bus terminal is being used as a swab testing area and isolation for those individuals waiting for their swab results.

Lawyer August Lizer Malate, the head of the EOC, said the team leaders of EOC met last Feb. 24 to discuss the augmentation of isolation facilities in the city.

He said the city will still use the isolation facilities in Norkis Park, the Mandaue City Isolation Unit (MCIU), and soon the former North Bus Terminal for asymptomatic to mild cases. Mandaue City Hospital will accommodate moderate cases.