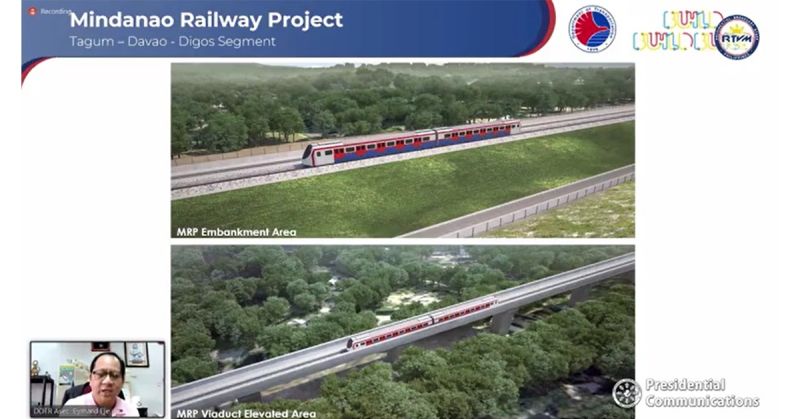 AN OFFICIAL from the Department of Transportation (DOTr) announced that the Mindanao Railway Project (MRP) will be partially operational next year despite not having a loan agreement yet with China.

DOTr Assistant Secretary for Mindanao Cluster Project Implementation Eymard Eje said in a virtual presser on February 24, that the railway project is supposed to be completed with a loan from China, but the project was delayed.

The agency is currently working on the Tagum-Davao-Digos (TDD) Segment, which has a total project cost P81.7 billion under a foreign loan agreement or official development assistance (ODA) from the People's Republic of China.

"Kung makukuha namin ito sa lalong madaling panahon, uusad po agad ang procurement process at pag natapos po, saka namin ine-negotiate ang loan process (If we complete this at the earliest time, we can move forward with the procurement process. Once we are done with that, we go into negotiations for the loans)," he said, adding that the actual construction will kick off once the detailed engineering design is approved and green lit.

Eje admitted that there were delays in the project due to the necessary documents required by their counterparts, which they are now resolving.

He added that they managed to work on the project amid the Covid-19 lockdown restrictions.

The DOTr official said they are expecting the loan agreement with China to be signed this year.

The TDD segment has a total of 100 kilometers, which is expected to reduce travel time between Tagum City, Davao del Norte and Digos City, Davao del Sur from 3.5 hours to 1.3 hours.

The original proposal was a two-rail electric train system, but the DOTr approved the monorail locomotive system or the diesel-electric multiple units.

Both the Mindanao Development Authority and the Regional Development Council (RDC) in Davao Region questioned the approved design.

"Andyan na yan, aprubado na ng Neda yan. (It's already there, which had the approval of Neda.) There's hardly anything we can do about," Minda Secretary Emmanuel Piñol said in a forum.

Piñol also said the train design “is not what the Mindanawans were asking for."

The Minda official also expressed concern over the delays of the railway project that could “spur the economy and lower the cost and improve the ease of transportation."

Meanwhile, the main depot of the train system will be located in Tagum City, while its satellite depot is in Davao City,

Eje said some parts of Davao City will have an embankment and elevated viaduct area for the MRP-TDD.

He said the project is currently under right-of-way site acquisition, continuous coordination with local government units, and conduct of regional coordinating body meetings.

The MRP, one of the big projects announced by President Rodrigo Duterte in his first State of the Nation Address in 2016.